Metallica says it's using Salesforce, then rocks out at Dreamforce 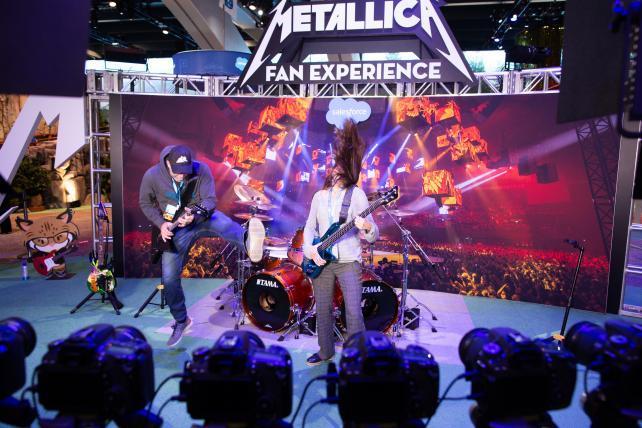 Metallica played on a different sort of stage this week.

The band was at Dreamforce, Salesforce's annual mega-conference and self-promotional spectacular, which floods San Francisco with some 170,000 attendees for three straight days. Over on the showroom floor, tucked between companies that specialize in workflow automation and predictive sales management, was Metallica's own booth.

Here, fans of cloud-based software and heavy metal posed for pictures while holding guitars that were once actually played by the band. Much like more conventional brands are seeking so-called digital transformations, it turns out, Metallica is trying to retool its outreach.

Lars Ulrich, the drummer and a band co-founder, spoke on stage during a keynote speech by Salesforce CEO Marc Benioff on Wednesday. "We're all peaking right now," Ulrich said. "This is our third time here. I guess we're the Salesforce house band."

Metallica wants to cement its legacy as a metal icon for generations to come (and make lots of money in the process). At Dreamforce, it announced that it's using Salesforce's Marketing and Commerce clouds to engage with fans—and to sell stuff, like its $200 limited edition albums, tickets and swag.

"The music business is in constant transition and you have to be on your toes like in the tech world," Ulrich said on stage. "Everything is shrinking onto mobile with streaming, social media and buying tickets."

Although Salesforce declined to provide specific numbers, Benioff said on stage that the entertainment industry itself is one that's increasingly adopting its software.

Metallica wants to better engage with its fans ... and sell them $200 limited edition albums.