May 17, 2018 05:00 PM
Fourteen top agency executives and creatives have been chosen to judge Ad Age's Small Agency Awards; the event is in Marina del Ray.

Fourteen top agency executives and creatives have signed on to judge Ad Age's Small Agency Awards. Now in its ninth year, the event is a conference and awards program that recognizes independent shops with under 150 employees that are do great work, kill it in new business, foster an excellent culture and thrive financially. 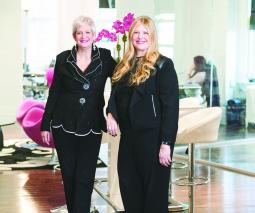 Terri Meyer (r.) principal at Terri & Sandy (seen here with co-founder Sandy Greenberg), will be a judge for this year's Small Agency Awards.

This year's jurors are:

"We're absolutely delighted that creatives of this caliber are eager to judge our Small Agency Awards," says Ad Age Deputy Editor Judann Pollack. "The work that has been entered showcases the best of the best for small shops, and for our esteemed judging panel, there inevitably will be some tough decisions."

The award ceremony caps an event geared specifically toward operating small agencies, and this year's agenda has sessions on how to build culture at your agency, how to create a succession plan, tips for winning new business and promoting your agency, and much, much more. Confirmed speakers to date include Anselmo Ramos, co-founder and chief creative officer, Gut (formerly of David); Katie Keating and Erica Fite, founders and creative directors at Fancy; Doug Cameron, founding partner, DCX Growth Accelerator; Nancy Hill, founder, Media Sherpas; and Ahmad Islam, CEO and manager partner, Ten35.

For more information and tickets for this year's Small Agency Conference, go here.