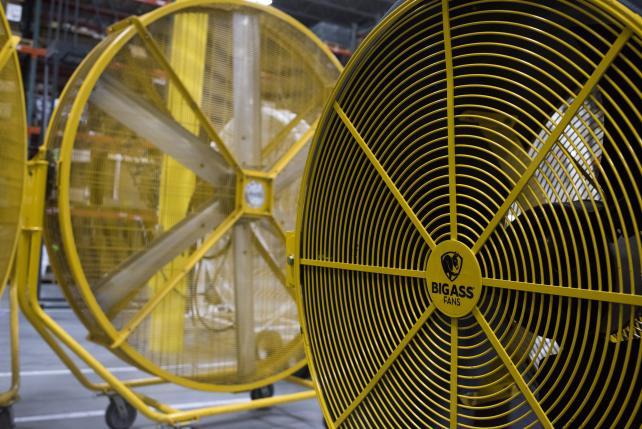 Your brand might not have a name as funny as this, but that doesn't mean your marketing always has to be so serious, Alex Reed tells Drew Neisser.
Credit: Ty Wright/Bloomberg

If there's one lesson Alex Reed could share with his fellow business-to-business marketers it would be "just stand out." It's a lesson he's taken to heart during his 10 years at the immodestly named Big Ass Fans, the industrial strength fans that you'll find in gyms, warehouses, atriums and other giant rooms around the globe. Having taken over the global marketing director role four years ago, Reed sees humor and personality as essential elements of the company's success.

As you'll learn in our interview below, Big Ass Fans does not put portray itself as a typical b-to-b brand. It has fun with its name and even more fun when someone gets offended by it. Ironically, the one time it jumped on a marketing bandwagon it failed miserably, leaving Reed to bemoan, "I've never understood the inclination for people to just gravitate towards the norm." (More on that below.) Staying true to the brand and its unique culture, Big Ass Fans has built the kind of loyalty and word of mouth rarely seen in the normally staid industrial b-to-b marketplace.

Let's start with the story behind your brand name.

It's a great story because the business actually started as the "HVLS Fan Company" which really rolls off the tongue! It's horrible. The only thing in common with "Big Ass Fans" is that they are both descriptive names. Descriptive of the tech: high volume, low speed. After a couple of years hearing the phone calls with people asking the question " Are you the guys that make those big ass fans?" it was adopted. So, it was really influenced by the customer, which was a big lesson in the early years of the business. Listen to your customers. Take risks, but first and foremost, do what's right for the customer and "Big Ass Fans" was just a perfect fit for what we make.

Are there any recent initiatives that worked well?

We started a quarterly magazine. That may be odd since everything is so digital now but what the magazine does is really put a spotlight on our customers, our company culture and on what sets us apart. Even though we're a B2B fan manufacturer, we have a really engaged audience that loves to read and consume that type of stuff. These are the people that are sharing on social media pictures of our fans when they see them out in the wild. These are the people that wear our hats and our shirts. It's centered on human interest pieces, and we're careful to not be overly promotional. People are inundated everyday with advertisements and sales pitches. The reason that people like to read about us, experience our company and come on tours is because they perceive the culture here, the things that we're doing and making to be out of the ordinary. That's the North Star for us.

What are you doing to acquire customers?

Until you've stood underneath one of these products, you really can't know how effective it is, how much air it puts out, how massive it is. So, we work on getting people underneath our products. Of course, industry trade shows have been a staple for us for long time, because we can blow all the papers off our neighbor's booth. Informal social gatherings, too. We've done brewery events where we serve beer in our pint glasses. We've done coffee and cars where we get automotive groups together to experience the products we have for garages and automotive places, and we serve coffee in our coffee mugs. There's a lot of traditional media--letters, print, digital, direct, but at the end of the day our products are the best way to introduce the brand and technology to the consumer. Beyond that, we see a lot of word of mouth, and that's what we're fostering with the Big Ass Fan club.

Has there been anything that you've tried that just fell flat?

Oh yeah. Marketing is definitely a test bed. And we were not immune to being enamored of this digital transformation concept, which absolutely has merit. We liked it because it was easy to see what's happening, but I think we missed the forest for the trees. We tried every form of digital marketing we could think of. What we found was, essentially the model we had built was crediting those digital touch points, but what was actually driving the customer in the first place was some other interaction with our brand.

What did you learn from this?

Everybody should understand what role each touch point plays in the customer journey and come up with a metric that makes sense. For us we were looking at all things as equal. It was a misunderstanding of what role these touch points played as the customer moved along the journey from awareness to consideration, to conversion and ultimately retention. Digital can touch each point there, in the spectrum. But we looked at it as a more efficient vehicle than some of our traditional forms, by their nature of being highly attributable, which was a mistake.

Does your humorous, light-hearted culture help out beyond customer acquisition?

Absolutely. Life's too short to be boring and I don't understand why businesses gravitate towards ordinary communications, ordinary branding. You don't have to have a cheeky name like "Big Ass Fans" to have a sense of humor. Just remember there is a human on the other side of the phone, or the mailbox. For us, humor is essential to everything we do. I mentioned delivering material in an unexpected way; messages need to be delivered in an unexpected way, and that doesn't mean the sales pitch has to be magical. Sometimes it is content that shows we're a fun company, that we like to enjoy what we're doing, and that we'll share some of that joy with you.

Do you have an example?

One of my favorite examples: We used to get so many phone calls from irate mail recipients. They were never customers, or going to be customers, but of course, they would call and say, "I'll never do business with a company with a name like yours!" We would take those calls, we'd hear them out, and what happened every time is that they would end up cussing us out which is fantastic because they call us to tell us our name is crass and then they end up swearing at us. We took those calls and we turned them into our own mixtapes and shared those with customers. We have probably a 2 to 3 percent minority that thinks the name is disgusting and wants us to change it. That's an ever-shrinking number. But then the people who like it, really like it, and they want to defend it, so they get a kick out of things like that.

Are there any big lessons you've learned in building your brand?

First, the number one job of marketing is to stand out. Humor is a great way to do that. We all like to laugh, we all love a good joke. I'm not recommending everyone change their company name to "Big Ass Something." That's not a recipe for success. There's so much noise and so many things that you compete with for attention. If you don't stand out, it doesn't matter how great your product or service is. The dichotomy there is that you have to deliver. If you're going to rely on humor as a vehicle to deliver your message, then your service has to be top notch. The products have to be great because there is an expectation that you're just goofing around. Those two things are really important.