Inside Nike's store of the future

November 15, 2018 10:35 AM
Nike opened a new flagship store in New York City that links shopping to your mobile phone. 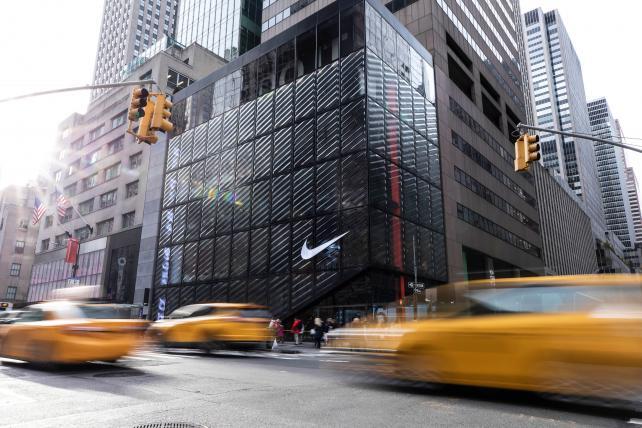 Nike has seen the future of brick-and-mortar shopping, and it revolves around your phone.

The company on Thursday opened a new flagship store in New York City, the culmination of years of internal research into personalized, experiential shopping. The six-floor building, a template for locations Nike has planned for cities around the globe, is designed to work seamlessly with the Nike app, letting shoppers check out on their phones, ask to have clothing delivered to dressing rooms and schedule appointments with an in-house stylist.

Shoppers automatically become NikePlus members after downloading the Nike app—membership that bestows on them such perks as discounts, personalized recommendations and exclusive product offers. NikePlus members already spend three times more on Nike.com than guests do, and the world's biggest seller of sneakers and athletic apparel believes it can achieve that ratio in physical stores as well, with a few tweaks to the traditional retailing model.

"Mobile is at the center of people's everyday life, and when people come into the store, they come in with their digital device," says Adam Sussman, Nike's Chief Digital Officer. "We want to create a seamless connection between the physical and digital experience."

In that regard, the Nike store of the future isn't primarily aimed at driving sales within its four walls, it's more of a front porch for Nike's entire ecosystem. A six-story immersive marketing strategy, if you will. You can buy shoes there, but you also might leave having only downloaded the Nike app and, as far as the company is concerned, that's okay too.

This is a trend playing out across retail, led by Nike and Amazon's new Books and Go stores, where apps are critical to the shopping experience, says Wendy Liebmann, CEO of retail consultancy WSL Strategic Retail. "There's a logic to pushing shoppers that way," she says. "It's about 'How do I get to know you? How do I engage with you and bring you into my community?' It's not all about the immediate transaction."

Nike glimpsed this a few months ago, when it opened a concept store in Los Angeles to test new retail ideas. The company tracked members who had come into the store versus a comparable set of customers who hadn't. The members who had visited the shop later spent 30 percent more, online, than the ones who didn't have the in-person experience.

The 68,000-square-foot New York location takes some ideas from that concept store and builds off them. The phone integration, plus added in-store benefits for members, serves two main purposes—to give customers a better experience and to generate data about who those customers are and what they like. That information in turn works its way through to product design and inventory decisions? "So it's good for our business and it's good for consumers," says Heidi O'Neill, President of Nike Direct.

Nike has long been considered a leader in the retail world, according to Liebmann. That's also true of its marketing. When Nike released a controversial ad campaign with Colin Kaepernick earlier this year, its marketing reputation alone led many to praise the decision. Nike knows it's customers, was a common refrain, so this must be what they want.

Pervasive NikePlus membership allows Nike to do that on a much more granular level, tailoring the experience for specific people. That's part of why members tend to spend so much more than non-members, they've built brand trust and affinity, and Nike is better at speaking directly to them.

And these stores are great for recruiting new membership. The conversion rate of shoppers into NikePlus members at the Los Angeles concept store was six times higher than at the rest of Nike's brick and mortar locations. In Shanghai, where Nike just opened a store similar to the New York flagship, Nike is signing up a new member every two minutes.

The new stores come at a time of transition for Beaverton, Oregon-based Nike, which remains the industry behemoth but has lost market share to rival Adidas in recent years. In response, the company announced its "Triple-Double" strategy: doubling down on innovation, speed and its direct-to-consumer business. Last fiscal year, the company did about 29 percent of its sales ($10.4 billion) through direct channels, encompassed by its redesigned website and apps, plus about 7,000 Nike shops around the world.

At the same time, Nike has cut ties with a number of retailers, focusing instead on the roughly 40 companies, like Foot Locker and Nordstrom, it deems most productive. Nike is also re-dedicating itself to urban areas, highlighting 12 key cities (including New York and Shanghai) that will drive a majority of the company's near-term growth.

The Nike app uses geo-fencing technology, so it knows the moment a shopper enters the store, instantaneously changing the home page to feature new offers and content. While in the store, shoppers will be able to book one-on-one appointments for advice on style or athletic goals, scan mannequins for product info and have specific sizes delivered to them in the dressing room. Nike members can check out by themselves on their phone, or pick up reserved items at ground floor lockers (unlocked, you guessed it, with your phone).

There are also multiple areas to customize product. If you're willing to wait 20 minutes for the dye to set, you can order shoes in whatever color you want. You can also sew on a swoosh of your choosing, or add patches to apparel found around the store.

In addition to New York and Shanghai, Nike is planning to open another similar store in Paris in late 2019.

"We really believe that we are leading and innovating the future of modern retail," Sussman says. "And this store is our most immersive and experiential yet."