January 09, 2018 06:46 PM
Thanks to fiddler Charlie Daniels, Taco Bell may have made the biggest splash in cable's second most-watched telecast of all time. 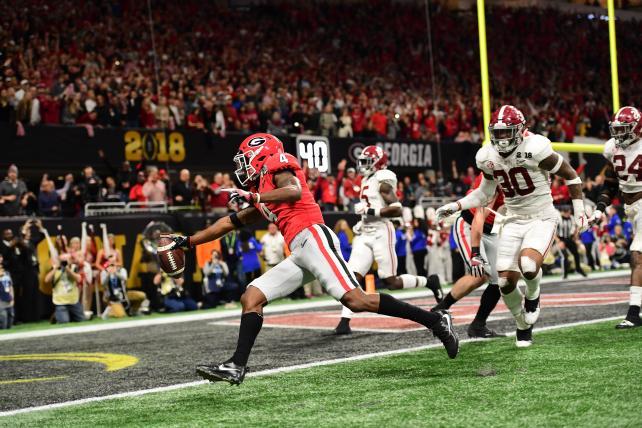 On the heels of a relatively weak opening round of the NFL playoffs, college football's title tilt put up near-record numbers on ESPN.

According to Nielsen live-plus-same-day data, Alabama's 26-23 overtime defeat of Georgia averaged 27.4 million viewers on the ESPN flagship network, of whom about 11.6 million were members of the adults 25-to-54 demo. The game, which ended at 10 minutes past midnight ET as 'Bama backup quarterback Tua Tagovailoa connected with DeVonta Smith from 41 yards out, averaged a 14.9 household rating.

When deliveries via the spinoff nets ESPN2 and ESPNU were tossed into the mix, the national championship game averaged 28.4 million viewers, making it the second most-watched telecast in cable TV history, behind only the inaugural CFP title tilt. Four years ago, Ohio State and Oregon scared up 34.1 million viewers via ESPN's self-branded "MegaCast."

In terms of the numbers that are most relevant to advertisers, Monday night's game averaged a 15.6 household rating on the three cable nets while serving up an 8.9 rating among adults 18 to 49 and a 9.9 with the 25-to-54 set. That works out to 11.5 million adults 18-to-49 and 11.9 million members of the slightly grayer demo; by comparison, TV's highest-rated scripted show, AMC's "The Walking Dead," is currently averaging 4.9 million adults 18-to-49 in live-same-day viewing.

All told, the 'Bama-Georgia showdown drew 12 percent more viewers than last year's instant classic, which saw Clemson score three touchdowns in the fourth quarter to dethrone the Crimson Tide by a 35-31 margin. The final game of the 2017-18 college football season out-delivered all but one of last weekend's NFL Wild Card Games, bowing only to the 31.1 million fans who tuned in for Fox's coverage of the Sunday afternoon Panthers-Saints grudge match.

With an average draw of 25.4 million viewers and a 14.6 household rating, the four Wild Card games were down 16 percent and 14 percent, respectively, versus the year-ago average (30.3 million viewers and 17.0 rating). This was to be expected, given the absence of such big-time national attractions as the Dallas Cowboys, Green Bay Packers, Seattle Seahawks and New York Giants.

While it's not always readily apparent why one championship game ultimately out-rates another, it's likely that the elimination of the New Year's Eve playoff round helped set the table for ESPN's title coverage. Once convinced that the two semifinal games would establish a brand-new Dec. 31 tradition, College Football Playoff executive director Bill Hancock reversed course after ESPN in 2015 and 2016 got stung by Auld Lang Syne.

With the playoff games shifted to Jan. 1, ESPN's ratings reverted back to form. Bristol's coverage of the Rose Bowl (Georgia-Oklahoma) averaged 26.9 million viewers, making it the No. 6 most-watched cable telecast of all time, while the 'Bama-Clemson Sugar Bowl blowout drew 21.5 million viewers.

Together, the Rose Bowl and Sugar Bowl averaged 24.2 million viewers and a 12.6 household rating, which marked a tidy 25 percent improvement over last season's ill-timed playoff telecasts (19.3 million viewers, 10.3 rating). Furthermore, this year's semis dwarfed the Dec. 31, 2015 playoffs, which averaged just 17.1 million viewer and a 9.4 rating. (It's almost as if it proved to be an unwise idea for Hancock and the heads of the Power Five Conferences to try and upend the established New Year's Eve party paradigm by force of sheer hubris. Go figure.)

That said, college football fans aren't permanently saved from New Year's Eve conflicts. Thanks to the byzantine rules that govern the scheduling of federal holidays and the Rose Bowl, the 2021-22 and 2022-23 semis will be played on the final night of the year. Of course, by then we'll all be consuming media via corneal implants, so the holiday conflict probably won't be all that big of an issue.

In any event, this year's results put to bed any grumblings about make-goods/audience deficiency units, which meant the College Football Playoff showcase functioned as a license for ESPN to print money and a golden opportunity for marketers to ring up a wealth of ad impressions. Among the most visible advertisers in Monday night's game were official CFP sponsors Ford, Allstate, Taco Bell, DirecTV, Capital One, Northwestern Mutual, AT&T and Dr Pepper.

Dr Pepper, which in 2014 signed on as the first official sponsor of the CFP, extended its deal with ESPN just hours before last night's kickoff. Per terms of the new pact, which expires in 2026, the soft drink brand will continue to serve as the presenting sponsor of the CFP National Championship Trophy and adds official sponsorship of the Big 12 Conference to its extant SEC partnership.

According to media buyers, the going rate for 30 seconds of national inventory in the 'Bama-Georgia game was around $1.2 million a pop. Per iSpot.tv estimates, Monday night's telecast generated north of 900 million live ad impressions.

While brands increasingly look to introduce new creative during championship games and other high-impact live TV events, sometimes the commercials that have kicked around for a few weeks generate the most buzz. In this case, Taco Bell unexpectedly saw its messaging get amplified by country fiddler Charlie Daniels, who early in the third quarter warned the restaurant chain that "The Illuminati is not a frivolous subject." Daniels, perhaps best known for that one song about the guy who wagers his soul in a cacophonous fiddle duel with Satan, appeared to be displeased with Taco Bell's cheeky "Belluminati" campaign, which riffs off the internet's slack-jawed fascination with the 18th century Bavarian secret society that today pulls the levers in the shadowy corridors of power and apparently is now run by Jay Z and Beyoncé.

Since Daniels chided the "Live Más" brand on social media, his Tweet has garnered 33,000 likes and has been retweeted 12,000 times. More tellingly, iSpot estimates that the "Belluminati" spot has generated some 68.2 million impressions in the last 24 hours alone—this for an ad that debuted on Dec. 15.

Thanks to fiddler Charlie Daniels, Taco Bell may have made the biggest splash in cable's second most-watched telecast of all time.