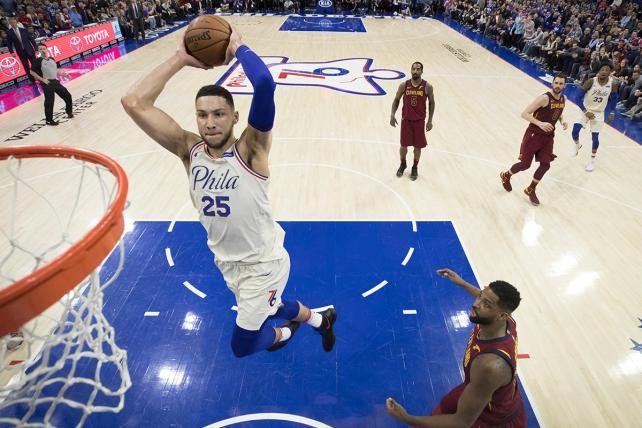 Ben Simmons of the Philadelphia 76ers dunks against the Cleveland Cavaliers at Wells Fargo Center on April 6 in Philadelphia.
Credit: Photo by Mitchell Leff/Getty Images

The two-month NBA playoffs juggernaut is set to tip off Saturday afternoon, and ad inventory is selling like Slurpees in Hell, as the league's broadcast partners estimate that some 90 percent of the available commercial time already has been snapped up by marketers shilling everything from fast food to summer popcorn movies.

And while the NBA postseason is always a must-buy for a number of youth-skewing categories, interest in this year's 16-team tournament is particularly elevated, given how the league has managed to defy the gravitational forces that have dragged down the ratings for pretty much everything else on TV. According to Nielsen live-plus-same-day data, the NBA during the 2017-18 season enjoyed its highest audience deliveries in four years, with the combined viewership across ESPN, ABC, TNT and NBA TV up 8 percent year-over-year to 1.28 million viewers.

Basketball fans who tune in for this weekend's slate of games will notice that TNT and ESPN/ABC for the first time have lined up presenting sponsorships for their respective live playoff packages. TNT has inked a comprehensive deal securing Hulu as the presenting sponsor of its full slate of postseason coverage, ranging from the first round all the way to the Western Conference Finals in mid-May. Meanwhile, ESPN and its broadcast sibling ABC have locked in PepsiCo's breakfast drink Mountain Dew Kickstart as the marquee backer of their first-round playoff action.

Looking down the road, Bristol on Friday evening confirmed that it has tapped ExxonMobil to serve as the presenting sponsor for ESPN/ABC's coverage of the Eastern Conference Finals. The three major sponsorship deals come on the heels of last month's news that YouTube TV had agreed to a multiyear pact to serve as the presenting partner of ABC's coverage of the NBA Finals.

In ponying up for the right to splash its brand all over TNT's NBA playoffs package, Hulu joins YouTube TV as the latest over-the-top subscription video service to hitch its wagon to a high-impact sports franchise. (Earlier this week, Hulu signed on as the presenting sponsor of the NHL's Stanley Cup playoffs and Final series, a deal that followed YouTube TV's aforementioned NBA Finals agreement and its initial move to back the 2017 World Series on Fox.)

Interestingly enough, Hulu sat out the NBA's regular season, having spent nary a dime on any live in-game inventory or shoulder programming. Before the TNT deal was finalized, the closest the OTT service came to making a pro basketball buy this year was the single 30-second spot it ran in a January telecast of an ESPNU NBA G League game.

That said, Hulu stepped up its game quite a bit during the 2017 postseason. According to iSpot.tv, Hulu bought five units in last year's Conference Finals and ran a brand spot during Games 1 and 3 of the NBA Finals.

Along with a "Presented by Hulu" tag that will appear on the NBA on TNT opening graphic cards, as well as custom billboards and scoreboards airing throughout each game, Hulu has committed to air a number of in-game spots during the Turner network's playoffs coverage. The commercials Hulu plans to air over the course of the postseason include a selection of custom branded spots featuring TNT's studio talent. At press time, details about the custom creative were hard to come by, but it's probably a safe bet that you won't see Charles Barkley and Shaq goofing on Hulu's Emmy- and Golden Globes Award-winning original series "The Handmaid's Tale."

Hulu's new NBA investment indicates how crucial it is for players in the crowded OTT space to try and grab consumers by the lapels via big-time sports buys. A heavy spender in the 2018 Winter Olympics on NBC and CBS and Turner's joint presentation of this spring's NCAA men's basketball tournament, Hulu also bought time in Super Bowl LII and the 2017 World Series.

According to Jon Diament, executive VP of ad sales for Turner Sports, representatives of the tech category have shown up in numbers for this year's playoff run. "Basically, any company that's based in Northern California wants to reach the NBA's audience of young, affluent, tech-savvy viewers," Diament says. By Diament's reckoning, "tech" encompasses everything from Silicon Valley stalwarts to social networks, gizmo manufacturers and OTT offerings.

As one might expect, official NBA sponsors will dominate the marketing paint, as the likes of Kia Motors, State Farm, AutoTrader, Taco Bell, Anheuser-Busch InBev, PepsiCo, Nike and American Express and Samsung will be well-represented across all media platforms. A good chunk of TNT's commercial time was sold during last summer's upfront bazaar, as part of packages that bundled regular-season avails with playoff inventory.

Diament says his ad sales team has surpassed its initial revenue goals, though there will be more commercial time to sell as the various series stretches beyond the four-game minimum. Last season, the Warriors and Cavaliers did everything in their power to rob the NBA broadcast partners of playoff inventory, with Golden State punching its third straight ticket to the Finals with a 12-0 sweep, while Cleveland required just one bonus game to reach the title tilt.

TNT has re-upped all three of its key game day sponsors, with American Express onboard to back the halftime show and Autotrader and Kia reprising their respective pre- and post-game duties. TNT's coverage of the NBA playoffs begins with a Sunday triple-header (Bucks-Celtics, Jazz-Thunder, Timberwolves-Rockets).

TNT enjoyed its most successful NBA season in four years, as its 67-game schedule coverage delivered an average audience of 1.7 million viewers, up 13 percent compared to the 2016-17 campaign. The network's NBA telecasts also drew a 0.7 in the demo, which works out to around 900,000 adults 18 to 49, up 15 percent versus last season's average.

The NBA's Disney-owned TV partners also put together a solid regular season, as ABC averaged 3.82 million viewers over the course of its 17 broadcasts, up 17 percent compared to last season's 3.27 million, while its demo deliveries improved 16 percent to a 2.2 rating, which translates to around 2.84 million adults 18 to 49. The 83-game NBA on ESPN slate was up 4 percent to 1.63 million viewers.

As is the case with TNT, ESPN/ABC has a number of auto, telco, quick-service restaurant, beer, insurance, apparel, tech and movie clients suited up for the NBA playoffs. Last season, one of the biggest spenders in the studio category was Warner Bros., which used the playoffs and the terminal Cavs-Warriors series in order to get fannies in the seats for "Wonder Woman" and "Dunkirk."

With its second-quarter earnings call set for May 8, Disney is in the midst of a quiet period. So while official word from ESPN/ABC was necessarily limited, it's safe to say that Bristol will be using the playoffs as a means to promote the newly-launched ESPN+ streaming service, as well as the Mouse House's May 25 release of "Solo: A Star Wars Story."

During the first round of the playoffs, the "NBA Countdown" shows that air on ABC will be sponsored by Straight Talk Wireless. ESPN's presentation of the pre-game show is sponsored by Mountain Dew Kickstart.

ABC's playoff coverage tips off Saturday afternoon with a rematch of last year's Western Conference Finals, as Golden State squares off at home against the San Antonio Spurs. Later in the afternoon, ESPN gets things started on the cable side of the ledger with a triple-header (Washington-Toronto, Miami-Philadelphia, New Orleans-Portland).

Last season, the NBA playoffs averaged 3.95 million viewers across the four networks, down 6 percent versus the year-earlier 4.18 million. Despite a somewhat softer launch pad, the ensuing NBA Finals were the most-watched since 1998, as ABC averaged 20.4 million viewers and a 7.4 in the adults 18-to-49 demo over the course of the five-game series.

TNT lands a presenting sponsor in the sports-hungry Hulu, while ESPN/ABC have hoop dreams of their own.