May 08, 2018 06:24 PM
Quartz is adopting programmatic advertising through Concert, and it has big implications for digital publishing. 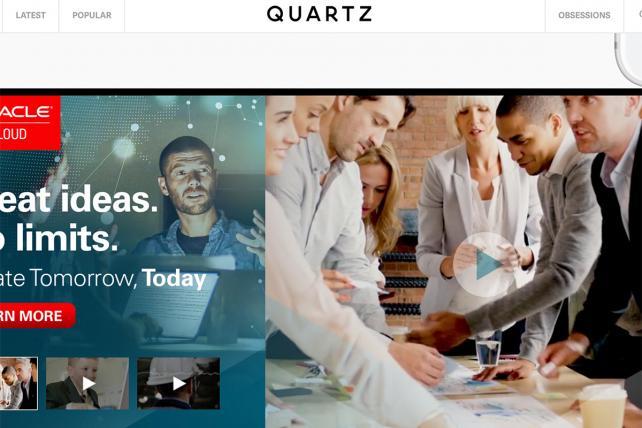 Atlantic Media-owned Quartz has long eschewed programmatic advertising, arguing display ads sold through automation negatively impact user experience. But the company said Tuesday that it is changing its mind, at least when it comes to private programmatic deals, and among other steps has begun selling ads through Concert, a digital ad marketplace created by Vox Media and NBC Universal.

"We recognize that the market is evolving and we need to make sure we are making it easier on marketers to use our platform to reach quality audiences," says Joy Robins, chief revenue officer at Quartz, adding that the decision to sell ads programmatically "was something we obviously approached really, really thoughtfully."

"This is the first time we have entered into a partnership like that for marketers looking to reach an affluent level of readers in a brand safe way," she added.

Quartz will join Concert's existing portfolio of premium publishers, which include Recode, Vox, The Verge and CNBC. Meanwhile, Quartz also says it's been doing private marketplace deals through programmatic since early 2018 (more on that in a bit). Private programmatic systems allow publishers more control than open exchanges, which Quartz is not adopting.

The news is significant because Quartz was perhaps the last publisher standing when it came to adopting programmatic technology to sell ads. BuzzFeed, which long shared Quartz's philosophical beliefs on programmatic, gave in last August when it announced that it, too, would sell digital ads through automation. The notion that publishers can flourish without adopting a programmatic solution seems to be over.

To be fair, Quartz won't be selling the sort of junk display ads that are scattered across the web. Instead, the company offers only a single ad unit that's both high impact and fits with the overall scheme of the website.

Robins says it opted to work with Concert because it joins four other large, established publishers. "We remain in a position where we aren't in any available open marketplaces," Robins says, adding that the company has also started programmatic advertising through closed, private marketplace deals. "We are doing both private and very specific deals that are able to be traded using programmatic technology, but they have to be direct and use our custom units, which we believe provide value."

The company has an in-house team of 35 employees dubbed Quartz Creative—separate from its sales team—that works with brands and advertisers in creating ads beyond standard display units for its website. Robins believes the addition of Concert will benefit the creative team, and vice versa.

Vox, Recode, The Verge, CNBC and Quartz collectively reach 86 million unique readers each month and, of those, 14 million are regarded as C-suite executives, or, C-suite "minus one" employees, meaning they're within earshot of decision makers, the companies say.

Concert says the addition of Quartz as an inventory partner will allow it "to offer an elite business distribution vehicle called 'Concert C-Suite' that reaches more next-generation executives and today's affluent decision-makers."

"One of the things we see is the C-suite expanding," Robins says. "You have the chief data officer, chief information officer—there are a lot more people involved with decisions. C-suite minus one are incredibly influential people and we believe it represents the premium nature of the audience within Concert."

When asked if its adoption of programmatic technology meant Quartz might consider running pre-roll video ads, Robins was quick to say no.

"We could make more money if we were to introduce pre-roll ads, but we won't do pre-roll because we just don't think it serves the reader," she says. "We won't trade out that user experience for adding additional revenue. It is not our ad model."

The publisher has historically eschewed programmatic ads, saying they create a poor experience for users.