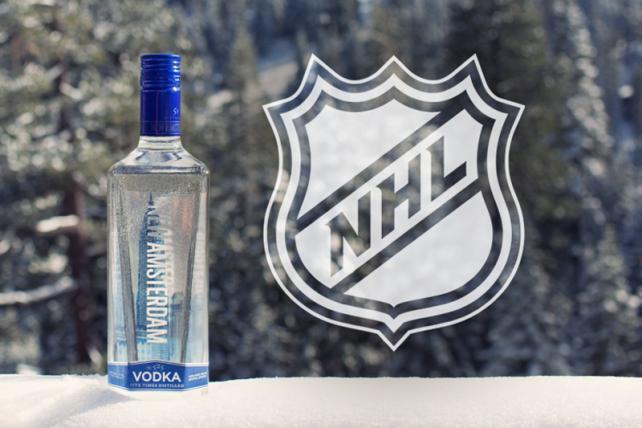 Fast-rising New Amsterdam Vodka has been giving more established vodka brands fits for a while. Now it's acting like them—at least when it comes to marketing spending.

The 7-year-old brand has signed the first big sports sponsorship deal in its history, inking a three-year pact to become the official vodka of the National Hockey League. New Amsterdam, which is owned by wine giant E. & J. Gallo Winery, declined to release exact financial terms, other than to say it cost multi-millions of dollars with the investment increasing with each year.

The announcement comes in advance of Wednesday's start of the 2018-19 NHL season.

The sponsorship follows the debut last year of a New Amsterdam national advertising campaign called "Pour Your Soul Out" that was backed with significant media support. But the NHL deal puts New Amsterdam on the same terrain as alcohol giants such as Anheuser-Busch InBev, Molson Coors, Diageo and Brown-Forman that spend heavily on sports sponsorships and advertising.

New Amsterdam has grown to be the fifth-largest vodka brand in the U.S., according to IRI, which does not include bar sales. Dollar sales grew 5 percent in the 52-week period ending July 15, according to IRI.

But the brand still has an awareness problem that it hopes to solve with the NHL deal. The league's fans over-index on vodka consumption compared with the general public, according to New Amsterdam.

"My worry is that not enough people know about our brand. And this is an investment to be able to help that," says Michael Sachs, director of marketing for New Amsterdam Spirits. New Amsterdam is also negotiating deals with individual NHL teams, he says.

But New Amsterdam will have to share the ice with Jägermeister. The herbal liqueur in September announced a deal making it the "Official Shot of the NHL." The NHL had been without a liquor sponsor for three years, after Diageo backed out.

New Amsterdam says its deal gives it exclusivity in the vodka category and only covers the U.S., not Canada. An NHL representative did not rule out more liquor sponsors. "At this point we are open to partnering with a very limited number of additional partners in the overall distilled spirits category, but have no ongoing discussions at this time," said David Lehanski, NHL senior VP of business development and global partnerships, in a statement provided by New Amsterdam.

The vodka brand "would prefer to be the only spirits brand, but it's not to me a big issue," Sachs says, adding that New Amsterdam "can very easily carve out our own space."

The brand is planning an NHL-themed campaign across broadcast TV, digital and social media. Content is still in development, but Sachs says it will tie into the broader "Pour Your Soul Out" campaign. An ad that ran on TV last year featured drummer Omari Williams practicing his craft.

The spot was created by David & Goliath. New Amsterdam has since cut ties with the agency and is in the final stages of securing a new lead shop for its 2019 marketing, Sachs confirmed.

Sachs says the NHL is "on the upward trajectory," pointing to factors including media exposure won by the Las Vegas Golden Knights. The expansion franchise made an unlikely run to the Stanley Cup final last season in its first year in existence. Tickets for Knights games remain in high-demand in advance of the 2018 season, according to StubHub. The franchise is among the teams that New Amsterdam is targeting for individual team deals, Sachs says.