October 26, 2018 11:00 AM
Today's blog chronicles all the goings on at the ANA Masters of Marketing Conference day 2.

Are you ready for Day 2 of the ANA Masters of Marketing Conference? Actually, it literally doesn't matter! It's going to happen whether you are recovering from last night's performance by headliner Kelly Clarkson or not.

As Clarkson sings, "What doesn't kill you makes you stronger."

Be sure to check back several times today for our dispatches from the trenches -- er, ballrooms -- at the Rosen Shingle Creek. For yesterday's going on, check out our Day 1 blog here.

It comes as no surprise that Marla Kaplowitz is not a fan of the trend among brands to bring agency capabilities in house. As president and CEO of the 4A's her job is to be the cheerleader-in-chief for advertising agencies. In this episode of Remotely Entertaining — shot on the floor of the ANA Masters of Marketing conference in Orlando this week — Kaplowitz breaks down her vision (with the help of a couple of emojis).

"It's important for marketers to remember they need that outside thinking, that outside provocation. And agencies do that in a brilliant way," she says. --Brian Braiker

Reynolds got a return engagement after being the highest-rated ANA presenter last year, thanks to being funny and disarmingly honest. This year he tried that approach again. Take Reynolds' description of the Salesforce headquarters, which he said: "Looms over all of San Francisco like the eye of Sauron. From my office in Oakland, I can see the top of the tower, and I'm pretty sure [CEO] Marc Benioff is looking straight into my brain and telling me to buy more technology."

But tech has its limits, which was one of the morals of his failure stories.

Renew Life, a supplement brand owned by Clorox, failed with a flimsy video that was "completely and utterly spectacularly ineffective," Reynolds said. "As my German CEO {Benno Dorer], who has a wonderful economy of language, said: 'Failure.' I'm told as a CMO to fail fast and cheap. And I certainly got the fail part. But it was slow and expensive."

It wasn't the agency's fault, he said, but a strategy problem from Clorox not understanding what information customers really need and when.

Stop Aging Now, another supplement brand, failed thanks to data-driven performance marketing, which had been working well for years, before Clorox acquired its owner Nutranext earlier this year. Reynolds said he went to the brand's Bethesda, Md., headquarters to learn its ways. "I asked what's the brand about? They said, 'It doesn't matter what the brand is about. We're selling all this stuff.' …It was moving at a speed I'd never seen before. It was exhilarating."

So Clorox leaned further into the performance marketing, Reynolds said. "And guess what, growth completely stalled. …The German CEO tells me 'You've now failed twice.' And I really have a very talented leadership team, and I'm certain many of them would love my job."

All that led to a search for what really matters.

"If we don't know what we stand for, why would a consumer understand?" Reynolds said. "Finally, and only finally, modern brands have to be technology and data enabled, but it comes at the end, and only at the end."

Both brands can recover by searching for a balance between a human approach to branding and tech-driven pitches to close the deal, Reynolds said. He didn't get into the details of their recovery on stage, but in an interview later, he said Renew Life is bouncing back thanks to better understanding what really drives people, mainly women, to buy its probiotics. That led to an influencer-marketing campaign paired with digital ads retargeting women who responded to messages from the influencers. --Jack Neff

Early on at the conference this week, 200 top marketing executives gathered together to hash out some of the biggest challenges and opportunities facing the industry right now. (For more on the Master's Circle, see yesterday's blog.) Chief among those participants was Alicia Hatch, the Deloitte Digital CMO and a booster for the modern marketer.

Ad Age caught up with Hatch for a quick video chat and a game designed to get frank, off-the-cuff answers to some of the bigger questions today (plus one or two softballs). Watch below to see what she had to say on the evolution of the modern CMO. -- Brian Braiker

ANA has run its "Masters of Marketing" conference in the shadow of Disney World for years, but Disney has typically not had much of a presence here at the Orlando event. That changed this year, however. Disney sponsored Friday morning's coffee break and plugged it with a custom video that made use of Disney-owned ABC and ESPN personalities, including "Good Morning America" hosts George Stephanopoulos, Robin Roberts and Michael Strahan. It ended with ESPN's Sage Steele interviewing ANA CEO Bob Liodice as if he was a star athlete. "As you get ready walk off the field, what are you planning next?" 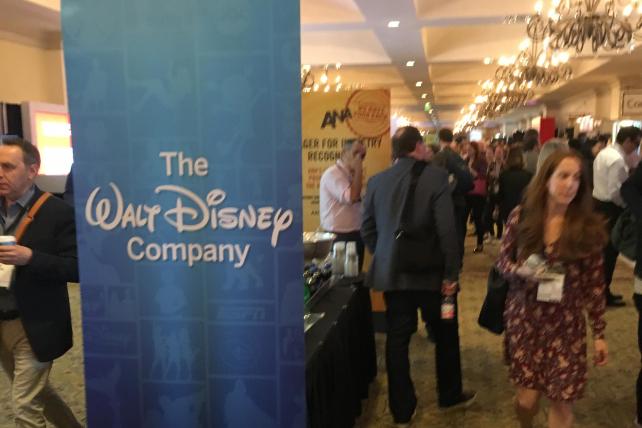 Disney also sent several people to the event, including Jill Estorino, executive VP of global marketing and sales for Walt Disney Parks and resorts, who spoke on a Friday morning panel. -- E.J. Schultz

O Come All Ye Loyalists… to Kohl's this holiday season

Sears may have succumbed to marketplace pressures with its bankruptcy filing earlier this month, but Kohl's is running full-steam ahead into the holidays. Chief marketing officer Greg Revelle told a packed crowd Friday morning about how the company's newly revamped loyalty program has led to big rewards for the 56-year-old brand.

"The loyalty space itself is evolving," he said, noting that "consumer-focused brands need to push traditional loyalty boundaries" to drive sales and create long-term engagement. Earlier this year, Kohl's combined its three programs, Kohl's Cash, Kohl's Charge, and Yes2You into one single Kohl's Rewards system, which is now at 100 stores, and rolling out nationally through the coming holidays.

Such changes, along with a pilot partnership with Amazon (Revelle dubbed it an "interesting adventure") and a continued focus on print marketing—he said print is still 30 percent of his mix—have helped Kohl's move forward while others, RIP Sears, have not. --Adrianne Pasquarelli

After 10 years of proclaiming "Driving Growth" as the theme of the Masters of Marketing Conference, the membership doesn't have much growth to show.

"We spend hundreds of billions of dollars on marketing worldwide, and industry growth is low, and half of the companies have declining sales," said Procter & Gamble Co. Chief Brand Officer Marc Pritchard on Friday at the conference, referring to Fortune 500 companies referenced by ANA CEO Bob Liodice last year.

Some attendees pointed to the fact that the fast-growing direct-to-consumer companies that Luma Partners CEO Terence Kawaja talked about Thursday generally aren't ANA members and aren't likely to join anytime soon. perhaps because they're too busy, well, growing.

But Pritchard led a panel of Growth Council participants with some concrete moves to change things. One is an ANA Marketing University, focused on "re-skilling" marketers on data and technology, said Alicia Hatch, chief marketing officer of Deloitte Digital. She said 200 marketers already have signed up to be adjunct professors, and three more in the audience raised their hands to volunteer to join them.

Pritchard also noted moves to close huge inequities for women and ethnic minorities in the ranks of marketers and agencies and in advertising portrayals. The Gender Equality Measure for ad testing, developed by the ANA's #SeeHer movement, is helping build growth, he says, because ads that score well see a 26-percent sales improvement. Now the ANA's Alliance for Inclusive and Multicultural Marketing is developing a similar ad-testing score to evaluate how ethnic minorities are portrayed in ads, he said.

The collective efforts of ANA members will make a difference, ANA CEO Liodice said: "I can guarantee you over the next couple of years when we return here we will have improved metrics to discuss."

Exhausted yet? Another full day lies ahead.