July 19, 2018 02:18 PM
Ideas from Ally's CMO, a Walmart executive, an agency search consultant and an agency chief on how small agencies can get on the radar with big brands. 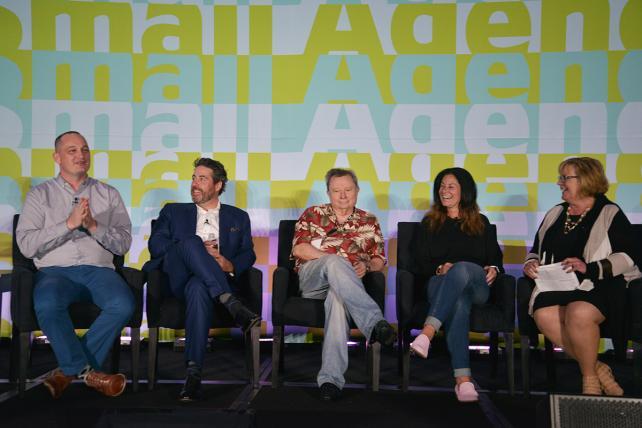 Marketers, a search consultant and an agency took the stage at Ad Age's Small Agency Conference to show how small agencies can get the attention of big brands. Here, five ideas from their panel discussion, called "New Business Hustle: How to Get on Our Radar," that could make your small agency pitch-perfect:

1. Think big Avi Dan, founder and CEO of agency search consultancy Avidan Strategies, says small agencies are more capable than ever before of tackling big accounts because production can be decoupled from the idea. "Small agencies can handle everything," he says.

2. Embrace your smallness "I think there's a renaissance of small agencies," says Dan, who believes CMOs are open to working with them in part because they don't have all the layers of big agencies. "Overall, I think there is a great deal of enthusiasm" among clients for small agencies, he says.

3. Get to know the consultants Andrea Brimmer, chief marketing and PR officer at Ally Financial, says she gets "probably 200" queries a day in her in-box from agencies looking for business, but she says most are general pitches that just don't break through. Brimmer, like many CMOs, turned to a consultant (Avidan, in Ally's case) to manage recent creative, digital and media agency reviews.

4. Start with a project BarrettSF got its foot in the door with a project at Walmart's Jet.com. Managing Partner and founder Patrick Kelly says the agency gradually landed work at other Walmart business units. BarrettSF recently created Walmart's first employee branding campaign.

5. Recognize that being outside has an upside Jeremiah Smith, senior manager of associate brand at Walmart, says BarrettSF had an advantage for the employee campaign because the San Francisco agency gave Walmart a fresh outsider's perspective. Smith adds that dozens of agencies work on Walmart, so there are opportunities for small agencies that can find a way in. "When you have a half a trillion dollars of revenue," he says, "there's a lot of business to go around."

At Ad Age's Small Agency Conference, marketers, a search consultant and an agency discussed how to get on the radar with big brands.