P.F. Chang's wants to be the American Bistro of Shanghai

March 27, 2018 04:00 AM
P.F. Chang's is opening its first location in China while de-emphasizing Chinese dishes in the United States. 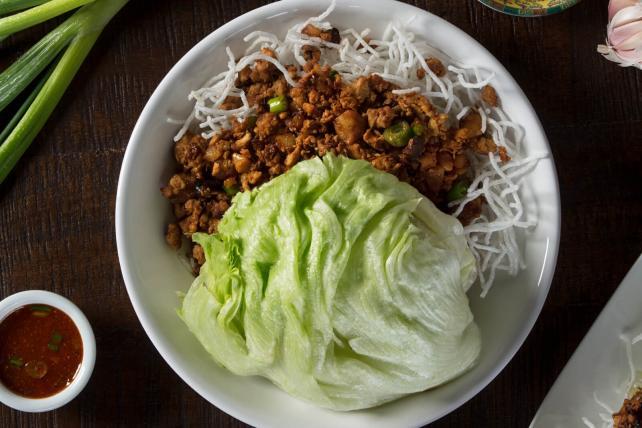 P.F. Chang's China Bistro is opening in China -- as an American restaurant.

The company is about to open a restaurant in Shanghai playing up its American roots while reducing its reliance on Chinese dishes back at home to remain competitive in the tough casual dining market.

The chain got its start in an Arizona mall in 1993 and continues to sell plenty of Mongolian beef, Chang's spicy chicken and lettuce wraps. In fact, those lettuce wraps helped the chain's performance after a Chicago TV newscast mistakenly dubbed the PyeongChang Winter Games the P.F. Chang Games on screen last month.

Now, P.F. Chang's, which has about 215 U.S. locations and about 90 international ones, plans to open 7 new U.S. restaurants and 12 to 16 international ones this year, including its first Shanghai location set to open in the second quarter.

"I'm a big believer that we can be hugely successful in China because in China we're not Chinese food, we're a restaurant and we're an American-inspired restaurant," CEO Michael Osanloo says in an interview.

The menu in China will have pictures for each dish, and includes some such as Peking duck and other duck and lamb dishes that do well in international locations, Osanloo says. It will look much like a P.F. Chang's seen at many malls across America, just with a bit more red and other vibrant colors on display.

In the U.S., P.F. Chang's uses the tagline "Farm to Wok" to remind people of its cooking style, and is opening up more of its kitchens so diners can see the process as part of a new look with more of a contemporary feel that doesn't scream Chinese restaurant. In China, it plans to use the line "An American Bistro."

Meanwhile, P. F. Chang's U.S. menu is starting to include a broader range of Asian fare as diners seek out a wider variety of flavors including Thai, Korean, Malaysian and Japanese. "There's a lot of consumer interest in Asian," says David Henkes, senior principal at Technomic, who says people are "really looking for much more of those regional differences and flavors."

Over the past 18 months, the P.F. Chang's menu has gone from about 95 percent Chinese food down to about 75 percent, Osanloo says. He's aiming for Chinese to be just 35 percent over the next three to five years of a broader Asian menu.

"We became a bit apathetic because we didn't have to be sharp and competitive," says Osanloo, who joined the company in 2015.

P.F. Chang's is also testing what he calls "elevated" versions of its lettuce wraps. "In some markets, it's an artisanal romaine," Osanloo says. "We tried a killer Korean-influenced pork with a gochujang sauce … It hasn't had the same broad-based appeal that I thought it would."

P.F. Chang's also has plenty of locations in shopping areas, and malls are trying to figure out how to lure shoppers when they are increasingly buying more online. About 18 percent of sales currently come from takeout, delivery and catering orders, and it expects about 30 percent of sales from those over time, says Osanloo. For now, it works with third-party delivery services, but Osanloo isn't thrilled that customers and the restaurant pay fees for those, so he's thinking about bringing delivery in-house.

Last month, the marketing team acted relatively quickly after that newscast showed the words "P.F. Chang 2018" with the Olympic rings.

"It was not purposeful on our part, but it was a wonderfully timed gaffe that we were able to make hay with," says Osanloo.

Contrary to this broadcast, we're not hosting the games. 🙂 https://t.co/3HW694pE4J

The chain's online response, created in-house, began with a joking disclaimer saying the company was not hosting the Winter Olympics. Then the company began running social videos of its own "sports" such as Synchronized Chopsticks.

"Our reservations markedly ticked up in the 48 hours after that newscast," he says, rising about 40 percent from the same time a year earlier.

The chain was already planning an offer to get people back into the restaurant following some brutal winter weather in the Northeast. "We just repackaged it to be a little more relevant and socially agile," says Osanloo.

It renamed its Chang's Lettuce Wraps as PyeongChang Lettuce Wraps for one day only, Feb. 15, and offered them for free with any entree purchase in the restaurants.

We're making headlines with our PyeongChang Lettuce Wraps, renamed and free with entrée purchase for one day only, 2/15. Dine-in only. https://t.co/7wPAr46ciI pic.twitter.com/rmirEEHXd8

Then, on Feb. 21, it followed that up with "PyeongChang Spicy Chicken" with an entree purchase.