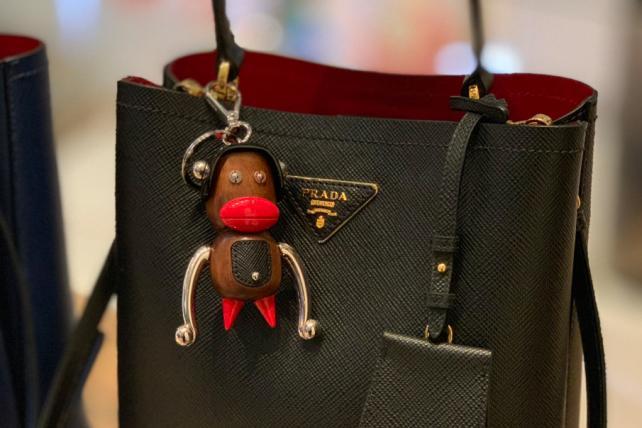 Pradamalia appearing in a Prada store, attached to a bag.
Credit: Chinyere Ezie via Twitter

After coming under fire this week for creating a monkey figurine with overly large red lips in a style reminiscent of racist caricatures of black people, Prada apologized and announced Friday that it will stop selling the offending products. .

The high-end brand had been using the image on items such as keychains and corresponding marketing as part of its Pradamagalia collection. The imagery was also prevalent in the brand's SoHo flagship, according to consumers who complained on social media.

Thanks to #blackface @Prada, now you can take #sambo home with you for the holidays #StopRacism #StopBlackface #StopPrada pic.twitter.com/5t2cvosLIF

The fashion brand did not return a request for comment. On Friday, it tweeted about the allegations, calling the keychains "fantasy charms" but noting it "never had the intention of offending anyone." Prada also said on Twitter that the products are no longer for sale and any corresponding imagery will be removed from circulation.

[1/2] #Prada Group abhors racist imagery. The Pradamalia are fantasy charms composed of elements of the Prada oeuvre. They are imaginary creatures not intended to have any reference to the real world and certainly not blackface.

[2/] #Prada Group never had the intention of offending anyone and we abhor all forms of racism and racist imagery. In this interest we will withdraw the characters in question from display and circulation.

By Friday afternoon, the keychains, called Otto-Toto and retailing for $550, were still searchable on Prada's ecommerce site but impossible to add to a shopping bag.

But consumers weren't buying the Italian brand's excuses. Some said they will boycott the brand in response.

So Prada put out some extremely racist $500 dollar keychains with the same stereotypical anti-Black caricatures that have been used for centuries, and now they are "splainin" claiming they weren't aware that their product was racist. These companies ALWAY play dumb#FOH pic.twitter.com/37uWAuklWu

How do you issue a weak apology and then keep this up? Your apology isn't sincere. #Prada #BlackFace https://t.co/wWXK799w5y

Yes actually. I buy a lot of Prada accessories and I won't anymore. 🤷🏽‍♀️ https://t.co/Eo0rgFVrvG

The company is not the only brand to suffer a marketing misstep this year regarding race. One of the most notable was H&M, which in January advertised a hoodie reading "Coolest monkey in the jungle" with a black child model.

Prada was accused of racism for its new monkey keychains, which people on social media said resembled "blackface"