This year's ad is a feel-good new spin on the Rudolph the Red-Nosed Reindeer story.

November 19, 2018 11:07 AM
Microsoft's latest holiday ad with m:united/McCann New York is a feel-good new spin on the Rudolph story. 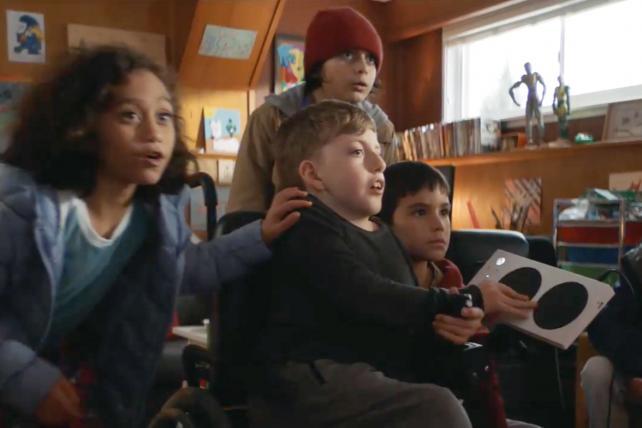 Microsoft's latest holiday ad with m:united/McCann New York is a feel-good new spin on the tale of Rudolph the Red-Nosed Reindeer.

The spot — called "Reindeer Games" — features real-life nine-year-old video gamer Owen Sirmons, who has Escobar Syndrome, a rare genetic disorder that makes it tough for him to use a traditional video game controller.

In the ad, his friends run through the neighborhood gathering others and shouting, "You've gotta see this," and "Owen's going to do it," as a rendition of "Rudolph the Red-Nosed Reindeer" plays. The friends burst into his bedroom just as he is about to win a game using an Xbox Adaptive Controller.

The controller, designed primarily to meet the needs of gamers with limited mobility, was recently named one of Time Magazine's best inventions of 2018.

"The genesis of the ad was really rooted in the song and the story of Rudolph, where what looks like a difference or a challenge is really an opportunity waiting to be realized," said Kathleen Hall, corporate VP of brand, advertising and research at Microsoft. "The real power and magic of technology is its ability to bring us together and make us better, no matter what our differences."

The Redmond, Washington-based tech company also promoted inclusion and kindness in last year's holiday ad, which featured a girl on her laptop imagining a visit through outer space where she collects an assortment of oddly drawn creatures who need love and support, and had the tagline "Create a Better World."

In October, Microsoft posted a "record" first quarter as it showed steady growth in its gaming business.

The campaign will premiere on TV on NBC during the Macy's Thanksgiving Day Parade on Thursday.

Microsoft's latest holiday ad with m:united/McCann New York is a feel-good new spin on the Rudolph the Red-Nosed Reindeer story.