But Verizon will continue sponsoring the league, just not as the official wireless provider

February 05, 2019 03:51 PM
Verizon, meanwhile, also inked a deal as a sponsor with the NBA, marking the first time two wireless carriers will both sponsor the league 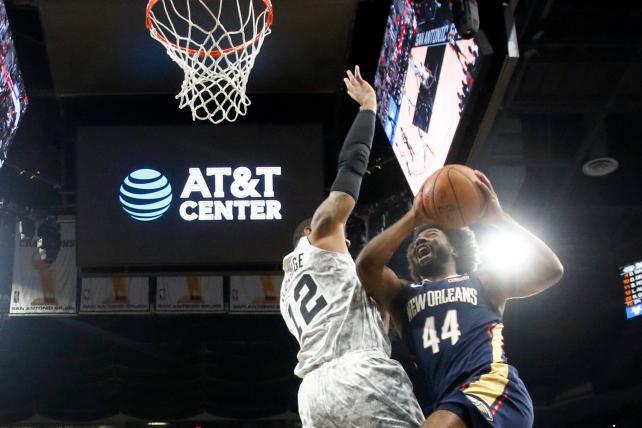 AT&T became the next official wireless sponsor of the National Basketball League on Tuesday, a title it snagged from longtime rival Verizon.

At the same time, Verizon isn't completely going away, as it will continue sponsoring the NBA, only not as the official wireless provider.

The news is significant as it comes at a time when the mudslinging between carriers for 5G dominance has escalated.

AT&T's multi-year sponsorship with the league tips off next week at the 2019 NBA All-Star Game in Charlotte, where the carrier will also be featured as a title partner during the Slam Dunk contest. The deal also allows AT&T, which recently acquired Time Warner, to promote its brands across all facets of the league, including the Women's National Basketball League, NBA G League, NBA 2K League and USA Basketball.

An AT&T spokesman says the company intends to work with the NBA to advertise across all of its marketing channels., as well as market products such as 5G when it becomes available.

The fifth generation of mobile tech, commonly known as 5G, is a key battle ground for both Verizon and AT&T. The technology will provide speeds that are 100 to 200-times faster than its predecessor, 4G.

Although many experts say 5G won't roll out at scale for at least another two years, Charlotte is one of a handful of cities where AT&T has already deployed the tech, which also happens to be home to this year's NBA All-Star Game.

AT&T may leverage the location of the event to promote its "5Ge" network, which, despite the name, isn't 5G, but a marketing ploy to make consumers think that 5G is already here. The company's CEO admitted as much at CES, which led to rival carriers such as T-Mobile, Sprint and Verizon publicly calling AT&T out.

Big picture, however, AT&T says it wants to innovate new NBA experiences with tech such as augmented and virtual reality, something that many experts say will improve following the rollout of 5G. Fiona Carter, chief brand officer at AT&T Communications, said in a statement that its deal with the NBA is about connecting with basketball fans "who represent a young, diverse, tech-centric and socially engaged audience who are important to our company."

Verizon, however, isn't letting AT&T have everything. The company last year inked a multi-year deal with the NBA, but that deal will focus on content with digital video shows such as "The Bounce," a multi-part effort with the NBA, Turner and Yahoo Sports. Verizon will also have rights to sell subscriptions service NBA League Pass.

Verizon, meanwhile, also inked a deal as a sponsor with the NBA, marking the first time two wireless carriers will both sponsor the league