When it comes to objectifying women, the beer industry historically has been among the worst offenders. Ads often used barely clothed women to pitch light beer or portrayed women as nothing more than servants to their beer-swilling husbands.

Things have gotten a lot better in recent years, with most big brands realizing that the tactics are not only offensive, but no longer work, as most modern women and men expect brands to be a lot more progressive. With a new campaign, Budweiser nods to that inglorious past to make a point about its future. The campaign, released today in conjunction with International Women's Day, features full-page color ads in The New York Times, Chicago Tribune and Los Angeles Times that juxtapose sexist Bud print ads from the 1950s and 60s with updated versions portraying women in empowered roles. 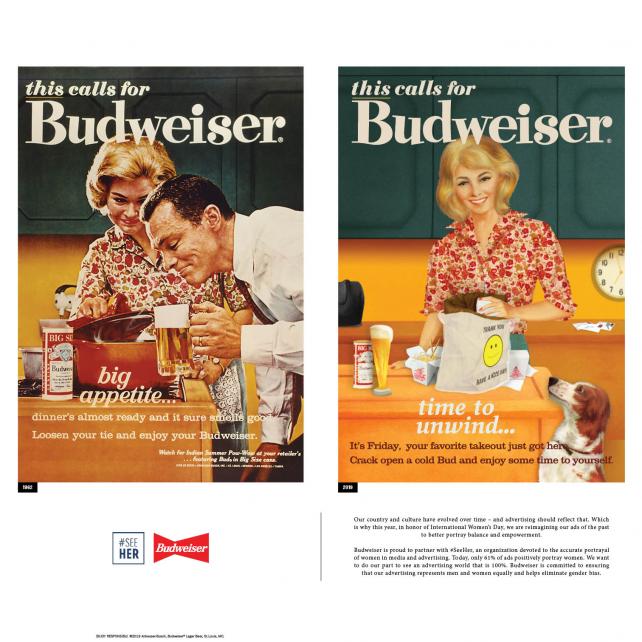 One of them shows a 1962 print ad depicting a woman hovering over a cooking pot with her husband looking on. The text is: "Big appetite … dinner is almost ready and it sure smells good. Loosen your tie and enjoy your Budweiser." Next to that classic ad is Bud's updated version, which shows a woman with a pet dog and some Chinese takeout. "Time to unwind," the copy says. "It's Friday, your favorite takeout just got here. Crack open a cold Bud and enjoy some time to yourself." See the other two ads below. 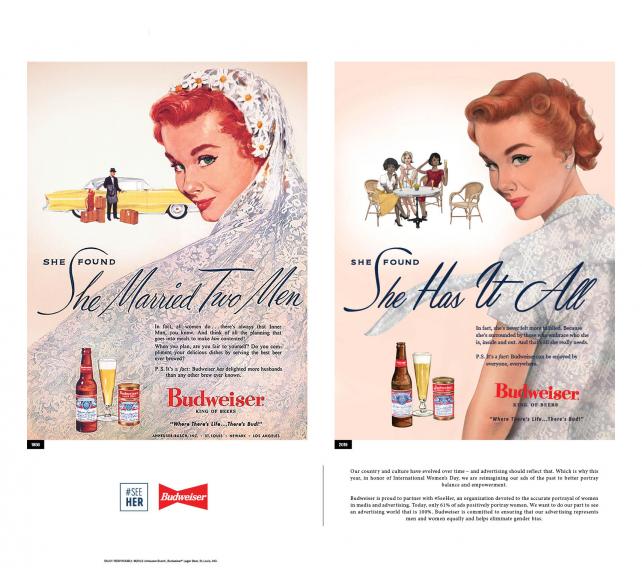 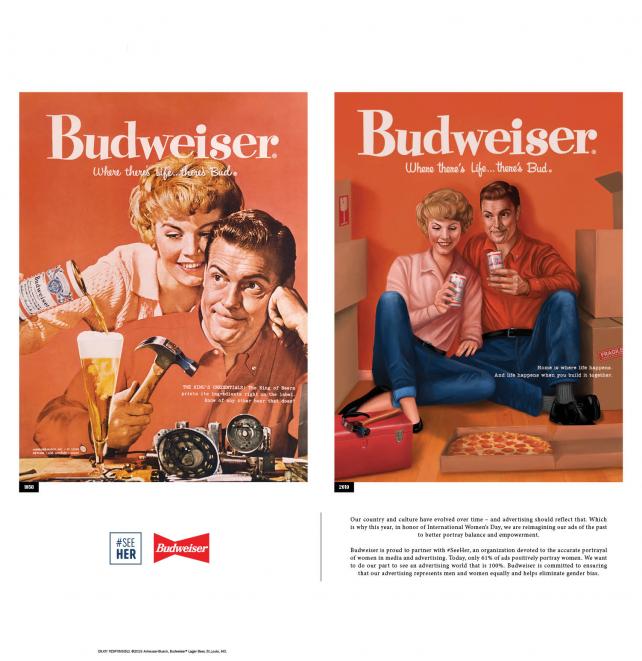 Of course the ads run the risk of reminding viewers that Bud, if you go back far enough, fed into negative stereotypes about women. But "for us, it's all about using our past to really serve as a launch pad showing women in a more balanced fashion," Budweiser VP for marketing Monica Rustgi says.

As part of the effort, Anheuser-Busch InBev-owned Budweiser is publicizing the fact that women now comprise more than 80 percent of the brand's marketing team.

The campaign from VaynerMedia also will run on social and digital media. The agency and Anheuser-Busch InBev hired three female artists to handle the modernized print ads: Heather Landis, a Los Angeles-based photo illustrator and photographer; Nicole Evans, a Melbourne-based artist with a focus on realism; and Dena Cooper, an illustrator specializing in the fashion, beauty and lifestyle genres.

As part of the campaign, Budweiser announced it is joining the Association of National Advertisers' "#SeeHer" effort, which aims for a more accurate portrayal of women in media and advertising. Rustgi confirmed that the brand will begin running its ads through the ANA-backed Gender Equality Measure testing. The so-called GEM tests score ads on how prominently they depict women.

"The GEM score introduces yet another metric that ensures you are showing men and women in a balanced fashion, as well as in a positive way," she says.