NYT to Trump Jr.: We're Digging This Hole for You. Trump Jr.: Wow, Thanks! Can I Help Dig?

So let's review what's been happening between The New York Times and Donald Trump Jr.: On Saturday, the Times published a story saying that Trump Jr. and top Trump campaign aides met with a Kremlin-connected lawyer at Trump Tower in June 2016. Trump Jr. said yeah, that meeting happened, but so what, we talked about a Russian adoption program. Then on Sunday the Times ran a story saying that Trump Jr. was promised dirt about Hillary Clinton at that meeting. So then Trump Jr. said, well, yeah, duh, I wanted to hear anti-Hillary stuff, but the information offered was useless, but I didn't really know who I was meeting with, and we still mostly just talked about an adoption program.

And then on Monday night -- well, see No. 1, below. [UPDATE: See the addition at the end of this post.] Anyway, see a pattern here? It's tempting to conclude that the Times is holding back what it knows about Trump Jr. and releasing it piecemeal in the hopes that Trump Jr. will lie and/or obfuscate, and then force him to backtrack as it releases more information. The Times, it seems, keeps setting traps for Trump Jr., and he keeps falling for them. Is it a cat-and-mouse game if the mouse keeps on climbing into the cat's mouth?

On that note and without further ado, let's get started with this special all-Trump Jr. edition of your media scan ...

1. Per a "Breaking News Alert" sent out by The New York Times last night (it landed in my inbox at 9:14 p.m. ET): "Donald Trump Jr. was told in an email that material damaging to Hillary Clinton was part of a Russian government effort to aid his father" -- which links to a story by Matt Apuzzo, Jo Becker, Adam Goldman and Maggie Haberman titled "Trump Jr. Was Told in Email of Russian Effort to Aid Campaign." A version of that story also appears at the top of this morning's print front page next to a giant photo of Trump Jr.

2. It's worth noting here that the Times is getting plenty of help from other media -- including typically Trump-friendly media -- in making the Trump Jr. saga the story of the moment. Rupert Murdoch's New York Post, for instance, sent out its own email blast last night (it arrived in my inbox at 10:04 p.m.) titled "Donald Trump Jr. was allegedly told in an email that the Russian government wanted to boost his father's election bid last year" -- which points to a piece headlined "Trump Jr. went to Russian meeting thinking Kremlin had dirt on Hillary" that rehashes the NYT report. A version of that Post-story-about-the-Times-story also landed on the tabloid's cover this morning: 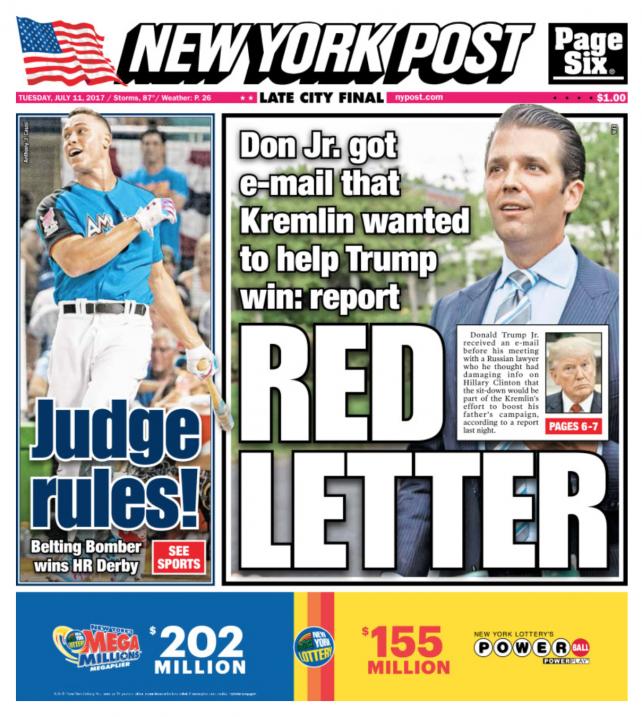 And Fox News, which has been known to react to bad news for the Trump administration by simply ignoring it, has a story by Howard Kurtz on its website right now titled "Has smoke led to fire? Donald Trump Jr. wanted oppo on Hillary."

3. Since Donald Trump Jr. keeps on confirming the reporting of the "fake news" New York Times and Trump-friendly media outlets are also piling on, I decided to check to see what actual fake news site Clickhole (a sibling of The Onion) has to say right now. I was not disappointed. A post headlined "Donald Trump Jr.'s Meeting With A Russian Lawyer: What We Know So Far" includes such underreported insights as "Donald Trump Jr. did not know who Hillary Clinton was before the meeting took place, and he still does not know who she is," "Donald Trump Jr. agreed to the meeting because he just really liked being invited to something" and "Trump Jr. is dousing himself in deer urine so that reporters will stay the hell away from him."

4. From The Daily Beast's Erin Gloria Ryan: "The Trumps Are America's Most Easily Duped Family" (subhed: "'I was tricked!' has become such a fallback excuse that it should be on the Trump family crest").

5. Ad Age's own Lindsay Stein offers a helpful guide to "Rob Goldstone: The PR Man Behind Trump Jr.'s Russian Meeting" that you really have to see. It begins,

Rob Goldstone was a little-known publicist until this weekend, when The New York Times reported that he helped set up a meeting last year between Donald Trump Jr. and a Russian lawyer promising damaging info about Hillary Clinton.

Lindsay serves up a diagram of the cast of characters that Goldstone's firm, Oui 2 PR, works with (and/or has worked with in the past), including "Moscow-based musician Emin, who sings in both Russian and English and is the son of billionaire business tycoon Aras Agalarov. ... In 2013, Trump starred in a music video for the song 'In Another Life' by Emin." And just ICYMI, Lindsay shares that rather amazing music video in her post.

6. The homepage of The Week's website this morning is dominated by a headline, "The sins of Donald Jr." (subhead: "How plausible is it, really, that the Russia scandal is all one giant misunderstanding?"), that links to a column by David Faris titled "How long will America believe Trump's lies about Russia?" -- and it is possibly the most scathing thing you will read about Trump Jr. (and his dad) today.

7. Stephen Colbert is back from vacation and in his opening "Late Show" monologue last night he briefly attempted to join the Trump administration in downplaying Trump Jr.'s meeting: "So it's not a smoking gun," said Colbert, before hedging: "But it is a gun ... meeting with a Russian bullet ... about their mutual desire to smoke."

And then this happened:

When he was told NYT was about to publish the content of the emails, Donald Trump Jr. tweeted images of them himself https://t.co/cNKhv4OPPn

Plus: Colbert is back from vacation -- watch what he had to say about Don Jr.