Does This Billboard Beautify N.J.? You Be the Judge 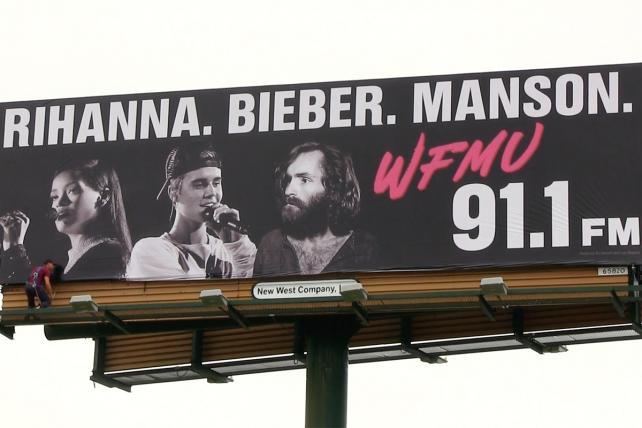 The station, known for eclectic music ranging from William Burroughs to Pavement to the Who, is in the midst of a Kickstarter campaign to choose and fund its "first (and last)" billboard, and while it ain't over yet, the leading billboard choice went up this week.

"We've always adored Route 280 in New Jersey—we think of it as 'our highway,' so when we started a brand new morning show—'Wake' with Clay Pigeon—we decided to try going old school with an old-fashioned analog billboard ad, to try to attract new car-bound, traffic-addled drivers on Route 280," says station manager Ken Freedman.

In a video on the station's website, Freedman says gleefully, "This confusing and tasteless billboard was made possible by you." He adds that 75,000 motoroists an hour take that route, making it an especially appealing spot to make a pitch for new listeners.

"If you are offended, confused, perplexed by this billboard, we apologize and there's still time to correct this egregious error," Freedman continues, and by this he means you can vote on a second billboard design. The ones in the running, though, may not make those put out by the first one feel any better. Choice No. 2 reads, for no particular reason, "Assault. DUI. Tax Evasion. Polka." before it pitches the station, and No. 3 isn't much more sophisticated: "Four out of five doctors recommend WFMU, 91.1 FM. The fifth doctor is an asshole."

Billboards—even the non-digital variety—still have juice for advertisers, in large part because almost everyone of driving age in the country gets behind the wheel. An average of 87.5 perent of U.S. residents aged 16 and older reported that they drove at least occasionally, according to an American driving survey from the non-profit AAA Foundation, released in 2016. And they drive an average of 29.8 miles daily, or 294 hours and 10,874 miles annually, it notes.

Out of home (OOH) advertising revenue rose 1.5 percent in the second quarter of 2017 compared to the previous year, accounting for $2.38 billion, based on figures released by the Outdoor Advertising Association of America (OAAA). Year-to-date 2017 the OOH industry is up 1 percent, and outperformed all traditional local media, which was down the first half of 2017, according to an OAAA analysis of Kantar Media data.