Facebook, Google and Twitter told Congress they aren't sure they've measured the full extent of Russia's manipulation of social networks in last year's U.S. presidential campaign and they don't yet have the technology to prevent it from happening again. 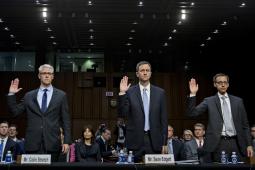 "It really is a global threat," Colin Stretch, Facebook's general counsel, said Tuesday at a Senate Judiciary subcommittee hearing when asked if countries such as North Korea and Iran also could use subterfuge to interfere in American politics.

The session was the first in two days of hearings before three congressional committees, as the technology companies face demands for change -- and the threat of new legislation to regulate political advertising -- after they acknowledged extensive efforts by Russians to sow discord and spread disinformation.

While Republican Senator Lindsey Graham of South Carolina, the subcommittee's chairman, said social-media platforms have failed to combat disinformation spread by foreigners, he cautioned that imposing new regulations on the technology companies may raise constitutional issues.

"The manipulation of social media sites by terrorist organizations and foreign governments is one of the greatest challenges to American democracy and a significant threat to our national security in the 21st century," Graham said in a statement. He said the hearing would help determine whether "legislative solutions are necessary and can be constructed consistent with our Constitution and values."

Democrats on the panel made it clear they will press harder for legislative action.

Subcommittee member Richard Blumenthal, a Connecticut Democrat, told reporters legislation is needed because "I doubt they found all the ads and posts. The practice and potential abuse are ongoing right now. Disinformation is going to become exponentially more rampant."

Senator Sheldon Whitehouse of Rhode Island, the Senate panel's top Democrat, said at the hearing that the issue goes beyond how technology companies can stop Russian agents from buying ads.

"Our adversaries have access to tools well beyond political advertising," he said. Foreign actors were hijacking Americans' social networks and manipulating how the platforms work to get people to share their content and to "launder Russian propaganda," he said.

Stretch said in prepared testimony for the subcommittee that 29 million people were directly served content from accounts backed by the Internet Research Agency, a pro-Kremlin Russian group.

After those posts were liked, shared and commented on via Facebook's social network, they landed in the News Feeds of about 126 million people at some point over a two-year period, the testimony shows. That's equivalent to about 40 percent of the U.S. population.

Twitter found 2,752 accounts associated with the IRA, according to prepared testimony by Acting General Counsel Sean Edgett -- more than 10 times the number originally disclosed. Edgett made clear the company continues to investigate.

Alphabet Inc.'s Google said the impact on its sites was much smaller, with $4,700 worth of ads linked to the Russian group, compared with the $100,000 Facebook earlier disclosed. Eighteen English-language YouTube channels were "likely" linked to the Internet Research Agency, Google said in a blog post ahead of the hearing.

But lawmakers said those discoveries didn't delve deep enough. Senator John Kennedy, a Louisiana Republican, asked if China had bought ads in last year's election. When Facebook's Stretch said he had no knowledge that it had, Kennedy interjected, "Turkmenistan?" and "North Korea?"

"I'm not aware of other foreign actors," Stretch said.

Kennedy shot back that it would be impossible to know when "you've got five million advertisers."

"We're not able to see beyond the activity we see on the platform," Stretch said.

Google and Twitter highlighted steps they've taken since the election to fight similar meddling in the future, such as identifying and shutting down fake accounts, blocking email phishing attempts, greater advertising disclosures and other methods.

"The spread of misinformation, extremist content, and hate speech online is a serious issue," Richard Salgado, Google's senior counsel for law enforcement and information security, said in written testimony submitted to Graham's panel. "Addressing these threats is a goal that Google shares with this committee, and we are fully committed to working with government, civil society, and the private sector to do our part to meet this challenge."

In 2018, he said, Google will "release a transparency report for election ads and pair that with a library of election ad content that will be accessible to researchers" and will "make it easier for users to understand who bought the election ads they see on our networks."

He said users will simply be able to click on an icon accompanying political ads that will identify those who paid for them.

Facebook's Stretch indicated his company would welcome a discussion of new legislation. He stopped short of endorsing a proposal from Democratic Senators Amy Klobuchar and Mark Warner and Republican John McCain that would require online political advertising to comply with the same disclosure requirements as broadcast ads. Facebook has lobbied for years against such requirements.

McCain said Tuesday the latest disclosures by the technology companies show legislation is much-needed. He said, "There will be further revelations and there will be more information, as I told you four months ago, this is a centipede and other shoes will drop."