Chris Wall, the finest writer I've been privileged to call my partner and friend, passed away in the ICU of Northwestern Memorial Hospital in Chicago just as Tuesday, May 9, turned into Wednesday, May 10.

So who was Chris Wall and why should you care? 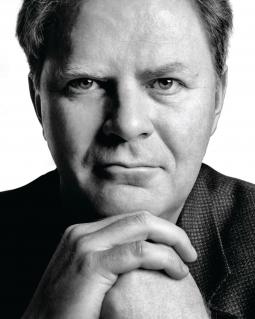 First, Chris believed that his clients should be famous, not him and not his agency. He never sought the cover of a magazine or an audience in the blogosphere. If he took a speaking engagement, it was to attract talent to his clients.

He not only read all of David Ogilvy's books, he seemed to have memorized them. "We sell or else" was his mantra. He had no respect for creatives who were in the game for their own fame, making up fake ads to win awards. He won his share of One Club pencils and Clios and Lions and Art Director's Club heads and whatnot, and made a big display of them – mainly to recruit talent.

He'd do anything to bring someone on board who could make a difference, but didn't trust one hit wonders. He wanted people who could deliver every day on different clients with different problems. Back in March, he told me, "You know, I've never won a Grand Prix at Cannes. But I don't mind. I won a Cranberry. Not everybody has a Cranberry, and it's really the best award you can win."

He was talking about 11 Cranberry in Brooklyn Heights – a beautiful historic brownstone he bought in 1998 for an insanely reasonable price that he lovingly restored into a showplace worthy of Architectural Digest (and the highest rent in Brooklyn after he moved to Chicago).

Back in 2000, he wanted to get the IBM creative team featured in CA to celebrate the remarkable achievement of moving the IBM brand from 283rd in value to #3. On the day of the shoot for the article, he didn't even show up because he was off on another job. They put his picture on a chair for the shot. For Chris, it was all about the people and the people were all about the work.

Because he was such a private person, Chris loathed social media. Ironically, that's where you'll find hundreds of testimonials about the difference he made in so many lives – secretaries who became copywriters, account guys who became creative directors, typographers who became art directors -- people who started without much work to show but who got hired based on Chris' faith in their potential, not the logos in their books or the hot shops listed on their resumés.

Weirdly for the ad biz, Chris never told a lie I can think of. Sometimes he paid a high price for his honesty. Account people, in particular, hated this Highly Effective Habit. If the agency screwed up, Chris would say something diplomatic, like "We screwed up. We'll fix it." If he thought someone was a jerk he would say something subtle like, "You're a jerk". If work wasn't up to snuff, he'd let you down easy by saying, "That sucks." Then he'd make it better.

More than one CMO asked me to prevent Chris from ever writing an email directly to them. He was famous for his flame mails, which could run to 2,000 words or more of perfectly-crafted prose. Whenever you opened a message that started with "Look…" or "Here's the thing…" you knew you were going to get your bangs singed. He was no more afraid to tell clients what was wrong with their organizations than he was to be critical of ours.

It was a combination of Midwestern honesty and worldly sophistication about how great work gets done and the need to clear everything else out of the way.

Susan Westre, his art director partner for more than 30 years, served as counterweight and salve to his mighty blasts that could flatten entire departments when he pushed "Send". Brilliant account people and planners also helped – like Lou Aversano, Jim Ward, Matt Ross, Jeff Kenyon, Teresa Alpert, and so many others. After one Chris flamer, Jim Ward spent an entire day putting out prose-induced conflagrations with the client. His end of day report was titled, "Last chopper out of Saigon". I had no doubt what that was going to be about.

Chris' logic was invariably irrefutable. Once a producer told him we couldn't spend any money because we were over budget. He said, "Look -- the client's spending $6 million producing the biggest Olympics package they've ever done. The shoot's stopped dead because we don't have a $65 printer on the set. Buy the fucking printer."

Business can be stupid. Chris was always smart.

Herta Ogilvy, David Ogilvy's widow, gave him the highest compliment I can imagine: "Chris meant so much to me. His wonderful friendship made my life better and made me feel nearer to David again. They had many things in common."

Chris didn't smoke a pipe, wear red suspenders or drive a Rolls. He usually wore black T-shirts and jeans and didn't care about cars. But he did have a lot in common with David – raw talent, an indefatigable work ethic, intellectual firepower, an objectivity that helped him grasp and solve wicked complex problems.

There are aspects to losing Chris that are like a bad Lifetime movie.

He had finally finished his beautiful penthouse apartment in one of Chicago's nicest Gold Coast buildings. He was planning to marry the love of his life, Betsy Spence. The future looked bright as could be. He was working because he enjoyed working and loved the people around him. The very day before he went into the hospital he held a creative meeting at his house about a new campaign he was excited about.

Then the gut-wrenching plot twist: his body gave out, no extension on the deadline.

He'd worked very hard to avoid the bad movie clichés of hundreds coming to pay respects and sympathy, the Facebook page with status updates. All the stuff we want to do when, really, we can't do anything. So he kept his illness as secret as possible. He just wanted to live a normal life for as long as he possibly could, hoping that those closest to him would understand and forgive.

Losing Chris has touched hundreds, perhaps thousands, of people in our industry. I haven't seen this kind of outpouring since we lost the giant Phil Dusenberry a decade ago. Our industry is far poorer today than it was one short week ago.

At 6'101/2", Chris actually was a giant. In a very real and legally-binding way, as Monty Python might put it. That wonderful combination of high intelligence, sound logic and a touch of human goofiness is captured best in a line Chris used to use, ironically, as always…

Steve Hayden is the retired vice chairman of Ogilvy & Mather

"Chris never told a lie I can think of. Sometimes he paid a high price for his honesty," writes Steve Hayden.