When a brand and its agency feature toddlers on a Facebook Live video, what could go wrong? 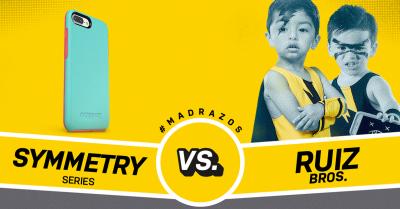 Cellphone case marketer OtterBox decided to find out on Tuesday in what was also its first significant push into the U.S. Hispanic market, targeting millennial Latina mothers.

"The Symmetry series [of phone cases] is more about fashion and design," says Mike Soderholm, VP of marketing. "We wanted to intentionally make this different, but with the same focus on millennial moms, and add a little humor."

U.S.-born Hispanic millennials who are raising families are a fast-growing group and avid social media users, but can be tougher to target than their parents, whom marketers could often reach through Spanish-language TV. Here's what Dieste and OtterBox learned from live-streaming #Madrazos (a Spanish slang word for a crash or painful collision):

Be flexible. "The Facebook Live platform can go wrong or go right, but it can't be scripted," says Ciro Sarmiento, Dieste's chief creative officer. "So we knew in advance it had to be flexible."

#Madrazos got off to a slow start, but quickly picked up. The first little boy was cute, but a bit shy, and mostly threw the phone around. In round two, the lively second toddler put the phone in a plastic pumpkin and flung it all over, stomped on the phone, and kicked it like a soccer ball. A referee kept tossing in more props, while a "mom-entator" did a fast-paced voiceover in Spanish and English. In the third round, the toddlers teamed up to attack the phone with Play-Doh.

Lean toward real-time responses. Agency and client worked together during the live-stream, coming up with questions to ask in the social media feed, and deciding which commenters should be offered cell phone cases. In Mexican lucha libre, it's common for wrestlers to have colorful nicknames, so Alan Lugo, OtterBox's Hispanic media specialist, asked commenters to come up with names for the toddler fighters and got some fun responses.

"That interaction between brand and agency was important," Sarmiento says.

Many of the comments, though, came from Dieste staffers. A few male creatives jumped in to suggest wrestling holds for the toddler fighters, which wasn't really the point when targeting millennial moms by playing on cuteness and kids' talent for trashing stuff. Intriguingly, the one person who commented most frequently, peppering the thread with likes and LOLs and pertinent remarks like "And crayon is surprisingly easy to get off OtterBox cases lol," wasn't from Dieste at all. The agency has no idea who that avid participant is, but Sarmiento told the client "Please give her a phone case!"

What's paid, and what's free. Using Facebook Live was free, but everything else is paid for. That includes a post that served as an invitation to the live-stream, and shorter versions of the content that will post on Instagram and Facebook afterward and be targeted to Hispanic millennial moms. Two social influencers who are young Hispanic mothers are also being paid, to post about it and to follow up by encouraging others to share their own #Madrazos stories of crazy, destructive things their kids do. The live video appeared in the feeds of 37,000 people organically, and more than 2,000 people watched it live. (See a three-minute version below, or watch the 30-minute Facebook Live here).

And here's what they forgot. OtterBox's message is stylish protection, but the live-stream ends with the referee lifting the tiny wrestlers' arms in a victory salute. Viewers never found out whether the cellphone survived 30 minutes of toddler bashing. Comments reflected this, with several people asking about the case.

"Next time we'll do that," says Sarmiento. (There are two more Facebook Live events scheduled).

Marketers have used Facebook Live for the last year or so, with sometimes mixed results. In a spectacular stunt a few months ago, HBO had "Game of Thrones" fans glued to their screens with a gigantic block of ice in front of the cameras, with the promise that hidden within it was a big secret -- the debut date of Season 7. The social campaign asked fans to comment with the word "fire," which would then activate a flamethrower trained upon the frozen block. About 10 minutes in, there was a glitch, and the broadcast ended unexpectedly with a still solid block and no reveal, enraging fans. The video eventually rebooted and the flames erupted again, but more than 150,000 fans vented their frustration.

See what the cellphone case marketer and its agency Dieste learned from the experience.