If You Can't Beat Them Buy Them: Mars Takes Stake in Kind

Mars is taking a stake in snack maker Kind, signaling just how desperate big food makers are to thrive in an industry where startups are winning.

"I call it buying scared, is what we're kind of seeing in the food industry right now," says Shea Food Consultants President Rick Shea. "Companies have realized that they need to be in some of these faster-growing categories with brands and/or products that are better positioned for the long term."

Mars is already in the category. Back in 2015, the company eagerly announced the national rollout of Goodnessknows, a snack bar featuring four small squares of fruits and nuts sitting atop dark chocolate. That line and a competing one from Hershey, under the Brookside name, pitted the major candy makers directly against Kind in the growing snack bar space.

Since then, Mars has been updating and expanding its Goodnessknows line, but now seems to be doublng down by taking a minority stake in Kind and planning to promote Kind in snack bars and other categories.

Mars declined to comment on the size of the Kind stake and the price it paid. Sales figures for Goodnessknows were not immediately available. But Goodnessknows is a much smaller player than General Mills' Nature Valley, Clif Bar and Kind, the top three snack bar brands with global market shares of 9.3 percent, 7.1 percent and 5.4 percent, respectively, according to Euromonitor International.

Kind has often used field marketing and other smaller spending tactics, such as erecting an outrageously huge mound of faux sugar in Times Square to point out how much added sugar American children take in each year. 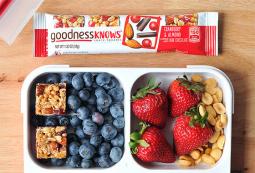 Goodness knows that the Mars snack bar brand has received plenty of attention. A new Goodness Knows campaign including TV commercials from BBDO began in January, followed by updated packaging and a new logo (the company calls the brand goodnessKNOWS) in May.

Mars has already announced plans for six new flavors set to launch in 2018. After six varieties that focused on fruits, nuts and chocolate, some of the upcoming Goodnessknows flavors sounded even more like direct competitors to Kind bars, with flavors including peanut butter crunch and nut & sea salt.

Mars and Kind said that the deal would allow them to utlize "each other's strengths." The deal between the two privately-held companies gives Kind the opportunity to expand in the segment more rapidly than it could on its own.

Mars isn't the only major food maker buying a smaller player to get a bigger bite of the category. Last month, Kellogg Co. said it plans to buy the maker of the RXBar line of protein bars for $600 million. The cereal giant looked outside its walls for growth even as it sells bars such as those under the Nutri-Grain, Special K and Kashi brands.

Kind, started by Daniel Lubetzky in 2004 with a focus on snack bars, now makes other products including grain bars and fruit snacks. It was named to Ad Age's Marketer A-List in 2015. Kind will keep operating independently from its New York headquarters, led by Lubetzky, the companies said.

Plenty of established food manufacturers weren't prepared for the rising demand for better-for-you products and items with clean ingredient lists, which consumers often prefer over the packaged foods packed with preservatives people can't pronounce. Food makers have responded at times by buying other companies, including Kellogg Co. purchasing Kashi, General Mills acquiring Annie's and Campbell Soup Co. bringing on Bolthouse Farms and Plum Organics. Over the past few years, lots of big food companies have set up divisions or teams dedicated to scouting and investing in food startups.

The New York Times reported that privately held Kind has a valuation exceeding $4 billion, citing people briefed on the transaction.

Shea called that valuation, if accurate, "outrageous" based on Kind's current annual sales, which Euromonitor International pegs at $718.9 million. "The valuations for these companies are going through the roof," says Shea.

Mars is taking a stake in Kind to help grow its product line and global reach.