ESPN and Wieden & Kennedy: A Look Back at One of the Most Storied Creative Partnerships in Marketing

It's the end of an era. Wieden & Kennedy New York on Thursday announced that its 25-year relationship with ESPN had ended, and that the agency had taken on Fox Sports as a new client. That closes the book on one of the most storied creative partnerships in the industry. It gave birth to iconic work including the beloved, consistently funny "This Is SportsCenter" campaign, which turned the broadcaster's beige Bristol, Conn., offices into a bizarre funland where team mascots, star athletes and ESPN personalities consorted in hilariously mundane ways.

"This Is Sportscenter" became a cultural phenomenon, with media outlets such as Time and Bleacher Report compiling lists of their all-time favorite spots. It also made Creativity's list of top campaigns of the previous two decades during the magazine's 20th Anniversary.

"It all started, basically, with 'SportsCenter' itself," the campaign's Art Director Mr. McQuiston recalled then. "Hank Perlman and I thought the idea of sportscasters on 'SportsCenter' having fun with the news on the air-while at the same time serious about sports itself-was an interesting premise for a show. So the logical extension for us was, if it's this goofy and funny on the air, imagine how crazy it could be around 'SportsCenter' when they're off the air. So we set about creating this alternate world, much as they did for 'Spinal Tap.' From there, we could do almost anything. It was wide open, which is perfect for a creative."

That wide open playing field remained fertile until today. For the last 15 years, the spots had been directed by David Shane of O Positive and continued to hilariously riff off current sports events, including the Chicago Cubs' curse-ending World Series win.

"To me this was always a writer's campaign," said Mr. Shane. "It worked -- or didn't -- on the strength of the simplicity and strength of the idea. And there were so many great ideas. I don't think people realize how tricky these things were to write, because, hopefully, they have a kind of tossed off, effortless feel to them. But between the clients killing ideas, agents deciding they're the arbiters of what's funny, and athletes getting hurt or traded just as we were about to shoot, the creatives were in a constant state of rewriting. I'm a little in awe of how much great stuff they could generate."

"I started doing these around the time Ted Royer [now chief creative officer at Droga5 N.Y.] and Jeff Bitsack [now a director at Caviar] took over the campaign as the main creatives," Mr. Shane continued. "Ted once joked that it was liked taking over on the 7th season of 'Mash.' Little did we know there'd be over fifteen more years."

As for his favorites, Mr. Shane said, "I was a fan of the ones that were what I guess I'd call smartly stupid -- kind of absurdist but done dryly. My personal favorites may have more to do with my own sentimentality. I'm super fond of the one where the crocodile hunter wrestles the Florida Gator to the ground outside an elevator bank. He was exactly the same guy off screen as on -- a big kid."

Mr. Shane, who's known for his skills in working with talent, had plenty to juggle on the "SportsCenter" set. "One of the weird things about doing them is you never really know if the athlete can pull off the acting requirements of the script," he said. "Sometimes but not often it's all you can do to kind of puppeteer them and breathe any life into the performance. And sometimes they're actually really strong natural actors. I remember being so impressed with Lance Armstrong and thinking, damn, this guy's a good actor. And it turns out he was even better than I thought."

He added that the sportscasters themselves were expert thespians. "Scott Van Pelt is an amazing actor," he said. "Dude just understands the rhythms of comedy, the shape of a scene. We were once shooting him and a Ukranian soccer player and it was a scene with lots of back and forth dialogue and it turned out the player could barely speak English, so we kept having to throw his lines to Scott until the only thing he had left to say was, 'I'll suggest it.' Scott basically performed two sides of a conversation by himself and it somehow worked because he's that good."

Mr. Van Pelt's former colleague, the late great Stuart Scott, was a true talent as well, as seen in this collection of ads.

Wieden & Kennedy also took the brand beyond funny business, with the "It's Not Crazy, It's Sports" campaign that highlighted the extreme lengths to which athletes and fans go for their sports. That included a short documentary from Errol Morris that featured the tombstone carvers, funeral directors and families of deceased sports fans.

The agency and Mr. Morris went on to create an ESPN series based on the campaign theme, which looked at the lives of obsessed sports memorabilia collectors, a British streaker and A.J. Mass, a man who donned the Mr. Met costume for four years. 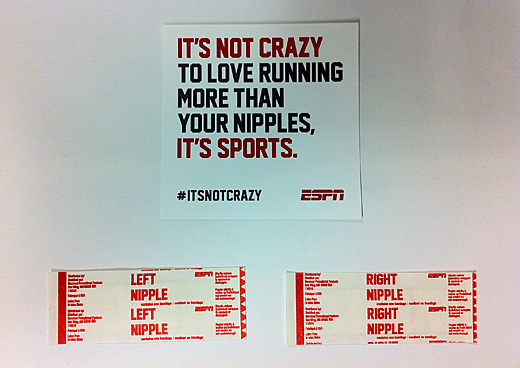 The idea even extended to the most unexpected of media, like bandages designed to protect the nipples of NYC marathon runners.

A retrospective of the great work from a great client-agency partnership now ending.