Which Came First, The Taco or the Egg?

Taco Bell Puts Egg Where its Shell Used to Be

August 15, 2017 08:00 AM
Taco Bell is selling a breakfast taco where a fried egg is the shell, while Chick-fil-A now has sliced chicken nuggets in a breakfast bowl. 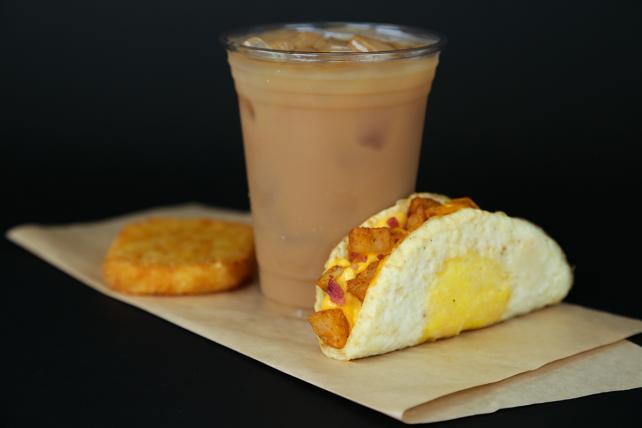 That good old breakfast standby, the egg sandwich, has some new competition.

Taco Bell is getting "naked" again, dropping its usual taco shell for a Naked Egg Taco, where a fried egg is the shell. Folks eager to try it early can do so by reserving -- yes reserving -- on Open Table. Chick-fil-A, meanwhile, is replacing its breakfast burrito with an updated version and offering a breakfast bowl with either sliced chicken nuggets or sausage.

Adding breakfast items to the menu is another way chains are trying to stand out in the crowded market for on-the-go meals. McDonald's, of course, has had success by offering its breakfast menu all day, while chains including Starbucks and Dunkin' Donuts have been adding more breakfast and other meal options to entice people to order more than coffee.

If Taco Bell's Naked Egg Taco sounds familiar, it's because the debut comes months after the Naked Chicken Chalupa, in which a piece of fried chicken was the shell. It also follows what apparently was a successful test run in Flint, Mich.

"Shell innovation is at the core of where we experiment," Taco Bell Chief Food Innovation Officer Liz Matthews said in a statement.

While Taco Bell's new breakfast item doesn't launch nationally until the end of the month, people in certain cities can reserve a chance to try them early, through Open Table. New Yorkers get to go first, on Aug. 17, followed by Laguna Beach, Calif. (Aug. 25), Austin (Aug. 26) and Chicago (Aug. 27). 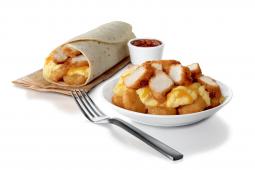 Chick-fil-A Hash Brown Scramble comes in a bowl or as a burrito.

Chick-fil-A's Hash Brown Scramble, meanwhile, includes its tater-tot like hash browns, scrambled eggs, a Monterey Jack and cheddar cheese blend and either sliced chicken nuggets or sausage. The hash brown scramble, which comes with jalapeño salsa, can be ordered in a bowl or as a burrito.

The debut comes as Chick-fil-A has "definitely seen an increase in popularity for breakfast bowls," Amanda Norris, senior-director of menu development, said in a statement.

The hash brown scramble, which Chick-fil-A said it tested in several markets this year and last year, replaces its Breakfast Burrito. Both Chick-fil-A items start at $3.49, the company said.

Of course, not every new idea is tied to breakfast. Taco Bell is also trying out some new things in noise and texture. Earlier this month, reports popped up about a burrito served with a side of spicy candy similar to Pop Rocks. But that meal is apparently available only in a very limited number of Southern California locations. At least, for now.

Taco Bell will even take reservations as chains try to stand out and gain more visits during the early morning rush.