September 07, 2017 08:00 AM
Halo Top is promoting the brand with a 90-second Mike Diva spot in which robots run the world and people's tastebuds. 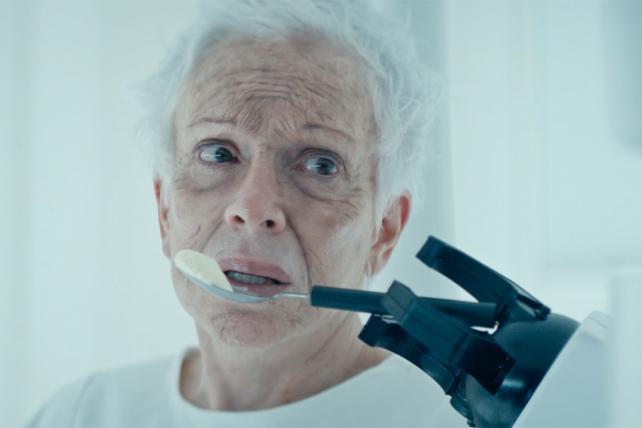 Halo Top, which was growing without running more traditional ads, is out with what appears to be its least traditional marketing approach yet.

The ice cream brand's new 90-second spot takes place in an all-white room. But the commercial, directed by Mike Dahlquist, is far from, well, vanilla. A woman is force-fed vanilla ice cream by a robot that would be more at home in a sci-fi movie than a dessert commercial.

Dahlquist, better known to his fans as Mike Diva, came up with the concept for the spot, says Halo Top Founder and CEO Justin Woolverton, a fan of Diva's work such as a video in which Hillary Clinton was a meme queen.

"We basically let him have free rein," Woolverton says.

The commercial will air in movie theaters before films such as "It" and "Kingsman: The Golden Circle," as well as on the brand's online and social channels. Its the latest new marketing approach for the brand, which recently became the top-selling pint in U.S. grocery stores and added new flavors to compete against a growing pack of competitors.

At first, viewers might think they're watching a preview for a new movie or TV show, as Halo Top's limited branding does not appear until the ad is nearly over, and is seen for just a matter of seconds.

"It's almost like an anti-ad," says Woolverton. "If anything it portrays ice cream a little negatively but we thought that was overshadowed by how great the dark comedy was."

The commercial was shot in Los Angeles in a warehouse art installation meant to recreate the white bedroom in Stanley Kubrick's "2001: A Space Odyssey." A sunny-sounding ice cream song played during the spot helps cut the dark vibe a bit.

"We've never done anything this off the wall before," says Woolverton.

Halo Top put more money into this shoot, done with production studio Lord Danger, than any other commercial or ad the company has done, Woolverton says.

"We do think traditional commercials can be a little bit stale and that people tune out on those a bit," says Woolverton, "and I think people are just more interested these days in just something that's just plain interesting, not something that's too heavily branded."