June 28, 2017 11:04 AM
The Times is betting readers will pay for the content even though free recipes are widely available online. 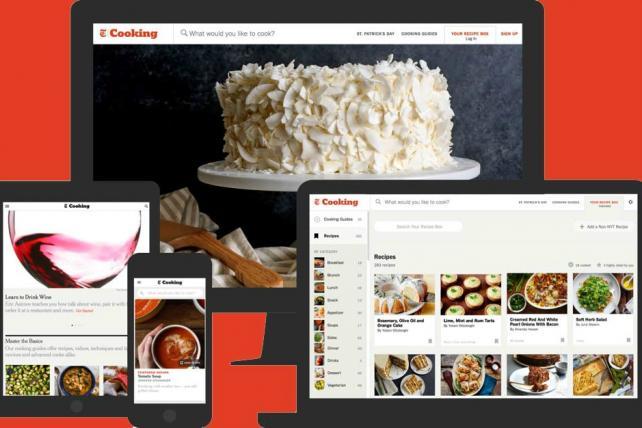 Current digital and home delivery customers of The New York Times will have full and free access to its newly locked-down Cooking content, but only for a limited time.
Credit: New York Times Co.

The New York Times is turning its cooking website and app into a subscription service, betting readers will pay for the content despite free recipes being widely available online.

Starting Wednesday, NYT Cooking will charge $5 every four weeks, or $65 a year, for access to more than 18,000 recipes from staffers like Melissa Clark and Sam Sifton. The service will rely on a metered model, meaning readers can get some content for free on the web, but everything on a dedicated iPhone app will be reserved for subscribers.

Created in 2014, NYT Cooking has amassed about 10 million monthly readers. Times executives say they're confident many will pay because the recipes are based on in-depth reporting that can't be found in a Google search. Sifton, for example, might interview the best Tex-Mex chefs in Texas for an enchilada recipe, according to Amanda Rottier, the product director for NYT Cooking.

"We bring the same journalistic approach to our recipes that our reporters who cover Iraq use," Rottier said in an interview. "For less than the cost of two avocados at Whole Foods you can get access to the best recipes in the world."

Like other publishers, the Times wants to rely more on paid subscribers and less on advertising, which has become a challenging business as print declines and Google and Facebook win the lion's share of online marketing dollars.

Past apps
The Times has a mixed record when charging for apps and online content. Digital subscribers to its news product have soared in the past year, thanks largely to interest in the last U.S. presidential election and the Trump administration. But in recent years the Times also shut down two paid apps, NYT Now and NYT Opinion, after they failed to attract large audiences.

With the new NYT Cooking, the company has to be careful not to alienate paid subscribers, who are about to find previously free content locked behind a second paywall. For a limited time, current digital and home delivery customers will have full and free access.

"We hope and believe that current users understand that great content and full Cooking experience is worth paying for," Rottier said.

NYT Cooking is a chance for the Times to make money from a large audience that isn't currently getting the paper. Of NYT Cooking's 10 million readers, only 840,000 are Times subscribers. The department's newsletter, edited by Sifton, has more 1 million subscribers, making it among the most popular alongside the Morning Briefing.

Rottier declined to estimate how many NYT Cooking subscribers the Times thinks it can get. The audience tends to be seasonal and she expects a boost around the holidays. Recipes featured in the cooking newsletter will remain free initially, but may become subscriber-only at a later date.

A subscription to NYT Cooking will include the Recipe Box, which lets users save recipes from anywhere on the Internet, rate recipes and leave notes to help other cooks.

Alexa, Siri
The Times is looking to have digital assistants like Amazon's Alexa or Apple's Siri read recipes aloud so cooks don't have to glance at their phones while hunched over the stove, Rottier said.

NYT Cooking is also considering customizing recipes by country to tap into international audiences. About 15% of NYT Cooking readers live outside the U.S. But adapting those recipes for other markets presents challenges. The Times would need to convert measurements to the metric system and change the names of some products. For instance, arugula is called "rocket" in Britain.

"If we find this is successful that would be our next foray," Rottier said.

The Times is betting readers will pay for the content even though free recipes are widely available online.