Guardian News & Media Announced a Plan to Cut Costs by 20% 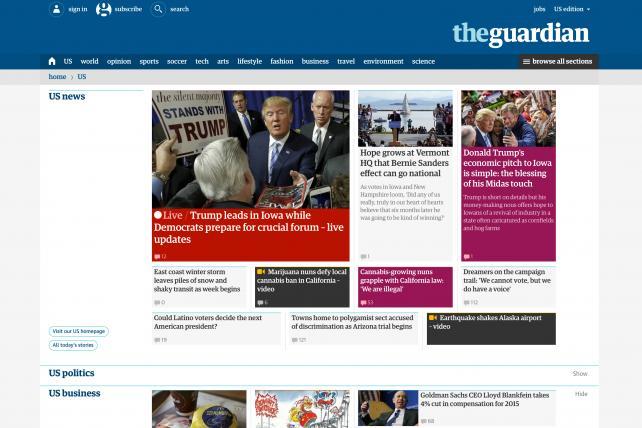 The Guardian's branded content division contributes 40% of its U.S. revenue, according to Guardian U.S. CEO Eamonn Store.
Credit: The Guardian

Guardian News & Media announced plans Monday for a 20% reduction in operating costs, but the publisher's U.S. outpost, Guardian U.S., will be spared, a spokeswoman confirmed to Ad Age.

The cuts, part of a three-year business plan, result from unstemmed declines in print advertising revenue and the sluggish growth of digital revenue sources, according to an article in the Guardian itself.

But the Guardian's U.S. and Australia operations were singled out in a press release as important opportunities for growth. The company is focused on "increasing their contribution to the overall business."

"Guardian America is also expected to break even within the next three years," the Guardian's Jane Martinson reported.

In a recent conversation with Ad Age, before Monday's announcement, Guardian U.S. CEO Eamonn Store said revenue in the fiscal year so far was up 70% from the period a year prior. The Guardian's fiscal year ends March 31.

"We've got a lot to be excited about there," he said.

Companywide, the Guardian's branded content division, Guardian Labs, reportedly contributes 16% to its bottom line. But that figure is higher in the U.S.: Mr. Store said Guardian Labs will contribute up to about 40% of Guardian U.S. revenue this fiscal year; he expects that proportion to rise to 50% in the next fiscal year. Furthermore, he claimed a 98% retention rate for branded content clients.

Although he expressed some hesitation about programmatic advertising, Mr. Store said that trading desk deals contribute between 20% and 30% of Guardian US revenue.

Addressing the long-term financial outlook for Guardian U.S., he said: "We tend to play the long game because we don't have VCs breathing down our necks."

The Guardian hopes to double reader revenue to £60 million from £30m, primarily through membership offerings. "We're really interested in exploring how that builds out," Mr. Store said when asked whether Guardian U.S. could devise its own membership plan.

Staff appointments in the U.S. and Australia were mentioned in the Guardian report as one reason for the company's rising costs. Guardian U.S.' staff is expected to number 140 by the end of March, which is about 20 less employees than originally planned.

"We don't feel like we need to hire quite the number of people we thought," Mr. Store said.

The Guardian's U.S. outpost won't be affected by an impending 20% cut in Guardian News & Media's cost base.