AOL's Message to Advertisers: We Are Open

May 04, 2016 12:00 PM
AOL took over the South Street Seaport on Tuesday night for a NewFront event designed to show how consumers interact with its brands. 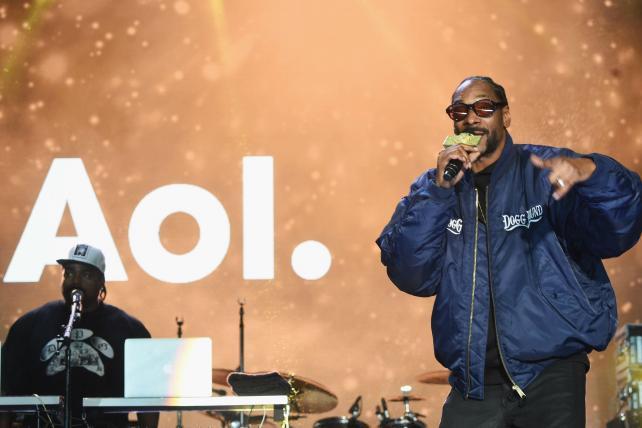 AOL has a message for advertisers: It is open.

The company, which was acquired by Verizon last year, is not only open for business, but it literally opened its NewFront event to the public and to brands it doesn't own or operate.

AOL took over the South Street Seaport on Tuesday night for a block-party-style NewFront that showcased talent and content from brands such as Huffington Post, TechCrunch and Maker, alongside partners like the National Football League and Hearst.

Out of the 25 brand experiences, just eight were actually owned by AOL.

"This has to do with our open philosophy," said Jack Bamberger, senior VP-global head of agency development, AOL. "Open means everything from partnering to literally data."

During a brief press conference ahead of the event, CEO Tim Armstrong said the event was designed with immersive experiences to show the industry how consumers interact with brands and technology.

These experiences included a drone course from TechCrunch, free-throw game from the NBA and football toss from the NFL.

"Instead of tell, we decided to show," Mr. Bamberger said.

There were also opportunities for consumers to engage with AOL's virtual reality content. Like most of the NewFront presentations thus far, AOL emphasized its VR efforts.

"It's something we are not just talking about but very serious about it," Jimmy Maymann, president of content and consumer brands at AOL said during the press conference.

The company recently acquired the virtual reality studio RYTO. At the event it announced that its live interview series, "Build," will move into a new studio designed to shoot in 360-degree video. The new studio will be at the ground floor level and public facing, allowing viewers more interaction.

"Build" produces at least four hours of live programming each day with 75 live events per month, and to date has hosted more than 800 episodes.

Mr. Armstrong emphasized AOL's trove of data, which he said is being used to build programming and distribute content to the right people at the right time.

"We really leaned deeply into data this year and our brand," Mr. Bamberger said. "It is really data-driven content in support of what is right for the audiences that are a part of our brands. We did tremendous research to find out what consumers were doing within each of our brands … then decided what content to make for our brands."

Instead of creating a bunch of content under the AOL Originals banner, the company is treating each of its verticals as channels, said Nate Hayden, VP-originals and branded entertainment, AOL. And each channel is being programmed as such.

Jared Leto's "Beyond the Horizon" was renewed for a second season on Huffington Post.

Following the success of unboxing videos, which shows the unpackaging of new products, Engadget will air "Worlds Most Dangerous Unboxings," bringing unboxings to insanely dangerous places like on a zero-G plane or a shark cage.

Makers will air "#MakersMen," which will highlight men who are either self-described feminists or are active in positively impacting women's rights.

More than 7,000 people RSVPed to attend the event, which featured performances by the band Years & Years, Snoop Dogg and Demi Lovato.

AOL took over the South Street Seaport on Tuesday night for a NewFront event designed to show how consumers interact with its brands.