July 06, 2016 01:00 AM
Chipotle is out with its third animated short film as it tries to recover from a sales slump that continues month after food safety concerns were raised.
Advertising Age Player

Chipotle is out with its latest animated film, "A Love Story," as it tries to move past its food safety issues.

In the film, which hits the web Wednesday and movie theaters Friday, two young drink-stand owners have a growing rivalry that leads them to create massive fast-food enterprises laden with processed products. Spoiler alert: Love and healthier fare ultimately win out.

This is Chipotle's third original short animated film, its first since 2013. Of course, it comes as Chipotle is trying to woo diners pretty much any way it can, with a new loyalty program underway after free food and buy one, get one offers did little to bring many people back to the "food with integrity" chain.

The film begins with one child running a lemonade stand across the street from another child's competing juice stand. To boost sales Ivan starts advertising his "Fresh Squeezed Orange Juice" and Evie soon responds with a marketing push for her "Hand Squeezed Lemonade."

Each character begins adding a wide mix of products to the menu, including lots of fast food and combo meals, as the rivalry grows. As the film progresses they "abandon their integrity, if you will, in their competition to lure people in," said Mark Shambura, Chipotle's director of brand marketing.

As the budding entrepreneurs age, their competing businesses become more elaborate and industrialized, packed with machinery churning out items filled with processed ingredients. 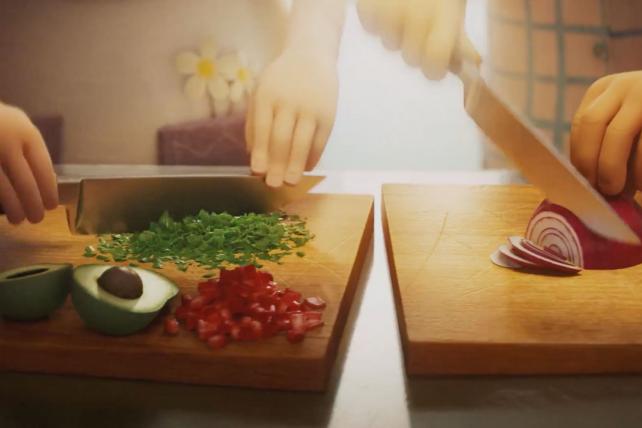 From Chipotle's A Love Story
Credit:
Courtesy of Chipotle

Ultimately the duo unite and lovingly serve, you guessed it, food that resembles some of the items at Chipotle.

The film's release comes roughly eight months after dozens of people began falling ill from eating at some of its locations. The U.S. Centers for Disease Control and Prevention documented 60 cases in two separate E.coli outbreaks, but did not identify a specific food or ingredient linked to the people's illnesses. Chipotle enhanced its food-preparation procedures in the wake of the issues, including changing how it prepares some of its food, which it has long touted as "food with integrity."

Some might see the film as Chipotle's attempt to use colorful imagery to move past its recent food safety scare headlines. However, the film has been in the works for 18 months, Mr. Shambura said.

"While we obviously have some trust to regain, the film isn't specifically about food safety at all. Our commitment to sourcing better ingredients and cooking those in our restaurants every day using classic cooking techniques have not wavered or changed. Some of our procedures have changed as it relates to enhanced food safety, but the film was not a place where we were going to focus on that specifically."

The film ends with a prompt for people to sign up for a new summer loyalty program, Chiptopia, born out of the prolonged sales slump Chipotle continues to find itself in months after the outbreak headlines ended.

"Fundamentally these things are really primarily brand-building or brand-ethos pieces," said spokesman Chris Arnold. "The timing made sense to specifically connect it to Chiptopia as well."

Planning for the short film was well underway before the company's marketing spending skyrocketed this year as it tries to recover from the fallout of the illness concerns that kept diners away and continue to pressure sales as well as the recent news surrounding Chief Creative and Development Officer Mark Crumpacker being placed on administration leave. Mr. Crumpacker was arraigned on cocaine possession charges in New York on Tuesday.

Chipotle posted its first quarterly loss as a public company for the recent first quarter and plans to post second quarter results on July 21.

Ahead of the company's upcoming quarterly results, Mr. Arnold and Mr. Shambura declined to say how many people have signed up for Chiptopia in its first few days. "Generally speaking it's pretty encouraging so far," Mr. Arnold said.

Chipotle also declined to disclose how much it has spent on "A Love Story."

"This is commensurate with what it would cost to produce any high-quality television or short-form content. We invest in it because we want to get the highest quality work," Mr. Shambura said.

The film is set to air on social media channels, Hulu, YouTube and Chipotle's website. The chain is doing a "fairly aggressive cinema buy" in which it will air the film near the end of the commercial block before previews in movie theaters for the next five to six weeks, beginning on Friday, July 8. It plans to have the film air on more than 10,000 screens, a slightly larger count than ran 2011's "Back to the Start," its first animated short film.

Chipotle made the film with animation production company Passion Pictures and CAA Marketing. It was directed by Saschka Unseld, whose work includes the 2013 Pixar short film "The Blue Umbrella." Chipotle's "A Love Story" features no speaking by the characters. Instead, it is set to a remake of Backstreet Boys' "I Want it That Way," reimagined by producer Blake Mills as a duet featuring Alabama Shakes' lead singer Brittany Howard and My Morning Jacket's Jim James. Chipotle said the song will be available for streaming on Spotify, Pandora, and SoundCloud.

It's not the first time the song has been used to promote a restaurant chain. In 2000, the Backstreet Boys' version was used to promote the type of chain Chipotle's film portrays in a negative light. Burger King touted one of its promotions in 2000 with the headline "Backstreet Boys Fans 'Have It Their Way' at Burger King" when that chain launched a CD and video promotion.

Chipotle's past films, out years before food-safety issues plagued the company and its shattered stock price, have been widely watched. On YouTube, 2011's "Back to the Start" has more than 9.3 million views and 2013's "The Scarecrow" has more than 15 million views.

Before he joined Chipotle, Mr. Shambura spent eight years at CAA, including work on the "Back to the Start" film and Cultivate events that Chipotle continues to produce.

'A Love Story' features a foodie rivalry spinning out of control -- and a cover of The Backstreet Boys' 'I Want It That Way.'