June 02, 2016 11:00 PM
Moms Demand Action and Grey Canada won a Grand Effie for a campaign that convinced Kroger and other retailers to stop allowing open carry of guns in stores. 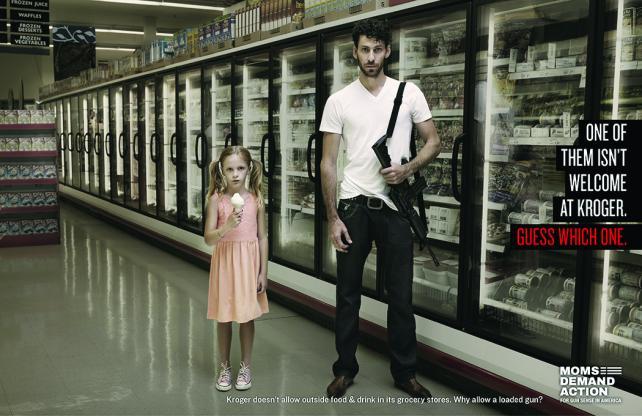 An ad in the 'Groceries Not Guns' campaign,
Credit: Moms Demand Action for Gun Sense in America/Grey Canada

The North American Grand Effie for 2016 has gone to Moms Demand Action for Gun Sense in America and Grey Canada for "Groceries Not Guns," a campaign that pressured Kroger Co. and other retailers to ban open carry of guns in their stores.

The Effies Worldwide competition ranked Procter & Gamble Co. as the most effective marketer in North America for the sixth straight year. Other most effective brands and agencies in the Effie Index, based on their award showings, included CVS Health, the Truth anti-smoking campaign and Walmart, which tied for first this year. WPP Group, its Ogilvy & Mather network and Ogilvy's New York office, along with independent agency Heat San Francisco, rounded out the "most effective" list.

The Grand Effie came from a campaign targeting Cincinnati-based P&G's corporate neighbor Kroger, including a message projected on the retailer's headquarters asking why the corporate offices had a no-gun policy but open carry of assault weapons was allowed in stores. The campaign from Grey included videos and posters showing how skateboarders, dogs and little girls eating ice cream cones were banned from Kroger stores, but not openly displayed assault rifles.

The campaign, which leaned on social media and news coverage, ultimately resulted in "15,763 no-carry zones frequented by over 7 million Americans each day," according to the award entry.

"The Grand Effie winner had an ambitious goal to influence legislation by strategically going after corporate America," said Carla Serrano, CEO of Publicis New York and an Effie judge, in a statement. "There's a lot to learn about how this case reframed the gun-control debate and galvanized a million moms in an effective way."

Other Grand Effie finalists and Gold Award winners included Abbott Nutrition's Similac and Publicis North America, along with WPP's Mindshare and Publicis Groupe's Mslgroup for their "In Support of New Moms" campaign.

CVS Health and BBDO, Mindshare, Edelman and The Marketing Arm won Gold for the retailers campaign around its decision to stop selling cigarettes.

GlaxosSmithKline and agencies Epsilon, Geometry Global and Brand Union won Gold for the over-the-counter launch of allergy medication Flonase. Taco Bell won Gold for its "Breakfast Defect from the Routine Republic" from Deutsch LA, Starcom, DigitasLBi and Edelman. And Unilever won Gold for a shopper-marketing program from WPP's Team Unilever Shopper along with Lunchbox, Shopper2Buyer and Barrows for a multi-brand CVS Love Your Skin campaign.

Moms Demand Action and Grey Canada won a Grand Effie for a campaign that convinced Kroger and other retailers to stop allowing open carry of guns in stores.