Longtime Sprite endorser LeBron James is making a softer, gentler pitch for the soda brand. "I never tell you to drink Sprite, even if I was in a commercial for Sprite, which I am," he says in a new ad. Instead, "I'd ask you."

The campaign, called "Wanna Sprite," attempts to use humor to give a somewhat mocking take on celebrity endorsements. The ad shows Mr. James refusing to read a "Drink Spite" cue card, while mingling with stereotypes of "cool influencer people," who predictably are holding bottles of Sprite.

The agency is Wieden & Kennedy, New York. The director is Neal Brennan, whose credits include co-creator of Comedy Central's "Chapelle's Show."

"We created this whole campaign to have a bit of fun with the idea of endorsements," said Danielle Henry, a group director-integrated marketing content at Coca-Cola North America. "A lot of brands use commercial endorsers, but the role of a Sprite endorser is to be unique and authentic and real."

Mr. James is, of course, one of the most powerful and sought-after brand endorsers in marketing. He has deals with Nike, Samsung, Beats, Verizon, Kia, Upper Deck and Blaze Pizza. Hillary Clinton even recently tapped him to help boost her campaign. 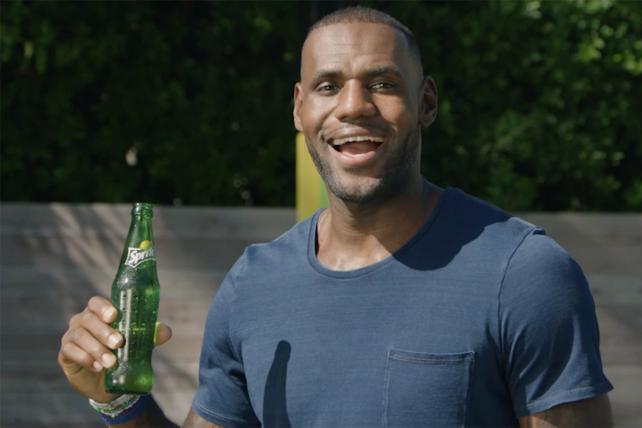 Mr. James began backing Sprite in 2003, the same year he entered the NBA. The 13-year-relationship is a rarity in an age when celebrities frequently switch allegiances. "There is belief in our relationship," said Bobby Oliver, director for Sprite and citrus brands at Coca-Cola North America. "He is very comfortable with us and what our brand stands for and how we go to market and we are very comfortable with him."

"From the beginning, this partnership with Sprite has always focused on being authentic. And I like that we got to have a little fun with that in these spots," Mr James said in a statement.

Sprite representatives declined to disclose budget figures for the campaign. Ms. Henry said it is "probably the biggest campaign we've had in awhile." Two separate 30-second spots will begin running on TV on Monday. Ads will start running in primetime on major networks later this month, marking the first time Sprite has aired ads in primetime on major networks since late 2015. Mr. James was scheduled to tweet a 60-second version of the ad (above) today to his more than 33 million followers.

The ads feature a cameo by hip-hop artist Lil Yachty, who performs a parody of his song "Minnesota." The "cold like Minnesota" line is replaced with "cold like Sprite soda."

The campaign comes as Sprite continues to buck declining soda trends. Sprite sales across all varieties are up 1.5% in volume and roughly 1% in dollars year-to-date, according to Beverage-Digest. "The most important thing Coke did for Sprite was refuse to let it grow up," said Beverage-Digest Editor Duane Stanford. "The brand has used music and sports to reach multicultural millennials who otherwise may have dismissed Sprite as their grandfather's soda."

PepsiCo has tried to gain new ground on Sprite with its recent rebranding of Sierra Mist as "Mist Twst," which is aimed at putting more emphasis on taste. Ads for the new version have been running since late winter. Spots plug "real juice" and encourage viewers to "Insist on the Twist."

Mist Twst sales are down roughly 18% in dollars and volume year-to-date, including the previous version (Sierra Mist), Mist Twst, diet and regular, according to Beverage-Digest. That is only a slight improvement from the 19% decline Sierra Mist was experiencing last fall, Mr. Stanford stated in an email. But sales of more profitable single serve packs are up 10% year-to-date, he said. "Challenging Sprite isn't easy, but PepsiCo doesn't necessarily have to win the war. Single-serve growth is profitable growth," he said.

The NBA star enters his 13th year endorsing the brand, which is bucking sluggish soda trends.