July 01, 2016 04:29 PM
The Trump campaign has passed another milestone of campaigning by introducing a collection of online ads into its still-sparse ad mix.
Credit: Donald J Trump for President

Donald Trump has passed another milestone of campaigning by introducing a collection of online ads into his still-sparse ad mix.

The Trump campaign ran just one online ad for a brief period during the primaries and only began disseminating display ads in earnest about two weeks ago. The Trump camp's long-overdue entrance into digital advertising reflects the recent acceptance of its dire need to build a supporter list and generate donations.

The messages are simple and follow a template used by the Hillary Clinton campaign and countless other political organizations. All the ads spotted by digital-ad-tracking firm Moat Pro since mid-June from Donald J. Trump for President feature the real estate mogul, often in his signature red ballcap, along with a simple non-issue-related message such as "Making America great starts with you," and "Join Team Trump."

One ad takes on a militaristic tone, declaring, "Help Trump march towards Washington!" (The phrase, to some, may also evoke the March on Washington, an iconic event in the U.S. Civil Rights movement.)

Others contain jabs at Ms. Clinton including one employing a nickname Mr. Trump has bestowed on the former secretary of state. An ad featuring the rallying cry, "Let's stop Crooked Hillary together," is intended to help corral Trump supporters behind a common effort to defeat the Democratic nominee. 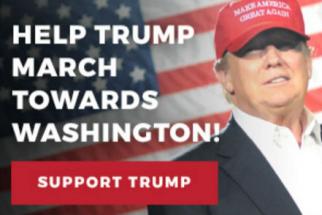 Another ad asking voters to "Help Trump make history" is a thinly-veiled reminder that Ms. Clinton has campaigned on the notion that a win for her -- making her the first woman U.S. president -- would be historically significant. Indeed, the Hillary Victory Fund, her joint fundraising committee with the Democratic National Committee and state parties, has run online display ads featuring a proud Ms. Clinton and the slogan "History made."

The Trump camp recently has also relied on text messaging to paint Ms. Clinton as a liar who "broke the rules and lied about it." A text message sent today to voters who have opted-in to receive them references her controversial use of a personal email server while serving as secretary of state.

Typically, political candidates rely on their surrogate PACs and advocacy groups to run negative ad messages. However, this election has proved especially fertile ground for mudslinging. While not as cutthroat as Mr. Trump's "Crooked Hillary" mantra, a smattering of ads from the Hillary Victory Fund have asked voters to "Tell Trump: America is already great."

The cash-strapped Trump campaign, which reported just $1.3 million on hand at the end of May in contrast with the Clinton camp's $42 million, also only recently started asking supporters for donations in emails.

Most of the recent Trump campaign ads ask for people to click to donate, or state "Stand with Trump," or "Support Trump." The Trump camp's digital ad toe-dip may come too late to catch up with the Clinton campaign on the fundraising front. Online display advertising has been a common practice used for list-building and fundraising for several election cycles, but it takes months to build a robust list of supporter names, emails and other contact information. Typically for political advertisers, the idea is to generate a database of supporters who can be contacted over and over via email and otherwise to garner donations.

According to Moat Pro, many of the Trump campaign ads appear to be turning up on long-tail websites, suggesting they've been aimed at people who have already visited the Trump site, using retargeting methods. The Trump campaign site features several ad technologies used to target site visitors through ads across the web, including DoubleClick, Exelate, Rocket Fuel and X+1. Facebook and Twitter ad tags are also present, according to ad-tag-tracking software Ghostery. NBC News first reported the presence of the tags on June 27, and some have speculated that the news led to a stock price rally for Rocket Fuel.

According to its most recent Federal Election Commission filings, the Trump campaign spent more than $842,000 on website and digital consulting with San Antonio-based firm Giles-Parscale in April and May. An additional $35,000 in April went to Draper Sterling, a little-known company the campaign paid for online ad services. The agency recently generated media attention for its "Mad Men"-inspired name and the fact that it was just established this year.

The Trump campaign did not respond to a request to comment for this story.

The Trump campaign has passed another milestone of campaigning by introducing online ads into its still-sparse ad mix.