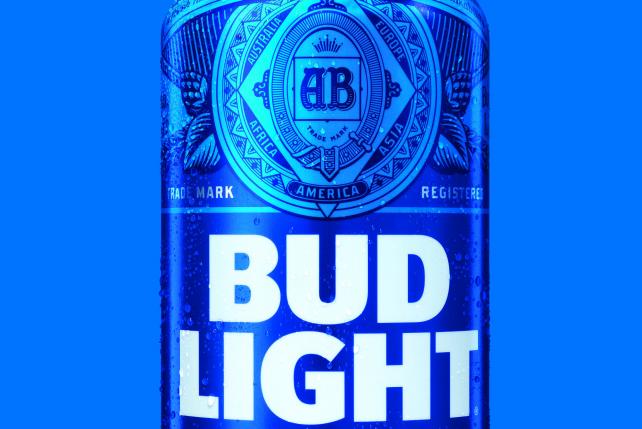 Anheuser-Busch InBev is close to overtaking PepsiCo as the nation's top sponsorship spender, according to a new ranking. The two NFL sponsors opened up a sizeable gap on third-place spender Coca-Cola Co., according to the annual ranking by sponsorship consultancy IEG, which calculates sponsorship fees in the U.S. and the portion of international spending dedicated to the U.S. PepsiCo spent between $365 million-$370 million and $375 million, according to IEG estimates. A-B InBev is not far behind as its spending jumped from $300 million-$305 million in 2014 to $360 million to $365 million last year. Coke, which ended its "American Idol" sponsorship in 2014, retained the No. 3 spot, but its spending fell from $290 million-$295 million in 2014 to $275 million-$280 million last year. General Motors, which dropped its NFL sponsorship in 2014, fell from fifth to ninth and is now behind Ford. Here is the top 20, courtesy of IEG: 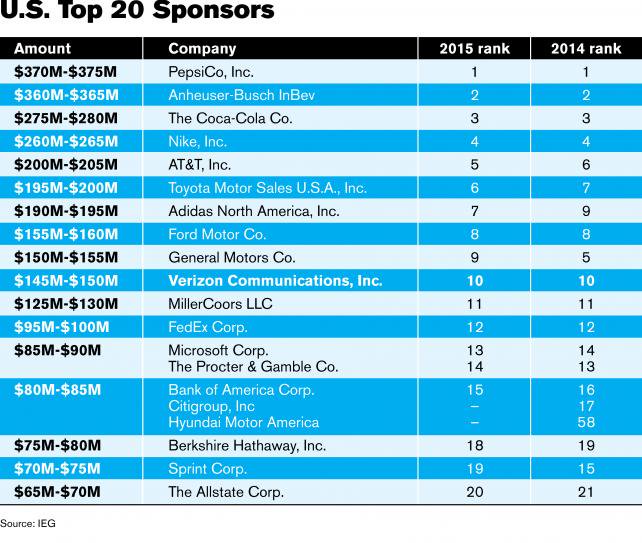 Here is more proof that Nike won the Olympics: Three of the marketer's ads made Ace Metrix's list of the top 10 breakthrough ads from the third quarter. Placing first was Nike's 145-second digital spot about Paralympian runner Scout Bassett. The ad (below) is part of the "Unlimited" campaign that got heavy airplay during the Olympics. The fifth and 10th-place ads also belonged to Nike. Frosted Flakes took the second spot with its "Let Your Gr-r-reat Out'" ad that features an 11-year-old girl in a wheelchair at a skate park. Tying for No. 2 was a long-form ad from Olive Garden, while BMW took third place with an ad featuring a Paralympian. "Nike, Frosted Flakes and BMW all delivered humbling and inspiring messages, making that strong emotional connection that engages viewers," said Peter Daboll, CEO of Ace Metrix. 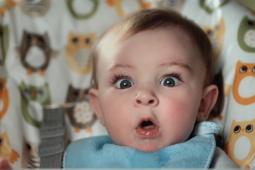 What brand delivers the world's best customer experience? Surprisingly, Pampers, according to WPP's brand experience agency Group XP, which found the Procter & Gamble Co. brand edged Disney and Paypal. Pampers' end users are notoriously hard to survey, but the algorithm behind the ranking is really based on such factors as branding, store design, content, online presence and user experience, based on data drawn over a 10-year period by WPP sibling Millward Brown's Brand Z. Amazon actually scored first in the U.S. on customer experience, followed by Pampers, with the two flipping the top two spots in the U.K. Rival Kimberly-Clark Corp.'s Huggies also did well, coming in 12th globally and fourth in the U.S. With so many babies having such great diaper experiences, the world's future is undoubtedly bright.

Clorox Co. is better known for bleach and cleaners than snack foods, but that may be about to change. The company, which also markets Hidden Valley Ranch and KC Masterpiece, is rolling out a social media campaign to back an extension of its Soy Vay line of Asian sauces and marinades into Asian-flavored snacks. A #SnackHour hub on Tumblr, launching Thursday, is backed by social media influencers who include Matt Bellasai, formerly of BuzzFeed and a People's Choice "Social Media Star of the Year." Soy Vay also will get paid advertising on Tumblr and Facebook, public relations and sampling programs. AKQA, Current and the in-house Clorox Digital Labs are handling the effort.

For years – at least since Fusion launched in 2005 – people have wondered what fully new system P&G's Gillette would come up with next. Some speculation has focused on a razor with heated blades. Well, now that system is here, but it's not from Gillette. SmartRazor is hitting the market, kind of, with a Kickstarter campaign that launched yesterday. The backers are not just scruffy bootstrappers who know nothing about bending metal. They also sell ShaveMate razors with shaving cream dispensed from the handle and backed via direct-response ads featuring prolific pitchman Anthony Sullivan. SmartRazor CEO Lou Tomassetti said he's gotten keen interest in the heavily patented SmartRazor since a 2015 teaser showing at CES, and most recently from big retailers. Now, he's just looking for the capital to make it.

Another formerly scruffy startup, Dollar Shave Club, recently sold to Unilever for $1 billion, is poking a bit of fun at its parent-to-be in the yet-to-close deal in a new in-house campaign for its latest line extension – Wanderer body wash and bath products. The ads lampoon muscle-bound imagery from P&G's Old Spice or hormone-infused ads akin to Unilever's Axe of old (though the body-wash bottle in question looks more like Suave), with a voiceover from Dollar Shave Club CEO Michael Dubin asking: "How about a shower product that's more you?"

Chobani is eager to post more videos with BuzzFeed's Tasty after a successful Olympic-themed run. Tasty, which has been around for a little more than a year with its food-focused videos, said Chobani was one of the first brands it partnered with back in December. This summer, Tasty aired three Chobani videos produced by BuzzFeed with a bit of a different look and feel from Tasty's regular content. The videos included shots of athletes Morgan Brian and Marlen Esparza instead of focusing just on the top-down recipe preparation shots Tasty is known for. The most popular video showed soccer player Ms. Brian preparing a chicken, quinoa and avocado salad.

In all, the three videos reached nearly 154 million people, with more than 83 million views, 1 million likes, and about half a million shares, BuzzFeed said. Those figures were exponentially higher than results from other Chobani videos Tasty posted in late 2015 and early 2016. Both sides said they learned throughout the process, noting for example that videos were shared more often when they included the word healthy when discussing a recipe. Chobani, which pays for views, not engagement, said the 1.2 million likes/shares and comments across the videos topped its engagement expectations. Chobani and Tasty are working on projects for the upcoming holiday season that may include experimenting with Tasty's Nifty or other franchise brands. Tasty has also worked with food brands including Mondelez and Diageo.

It may still feel like summer in parts of the country but the fall and winter soup season is heating up. Progresso's new batch of spots tout that it is the first large U.S. grocery store brand using only antibiotic- and hormone-free chicken breasts in all of its chicken soup. The spots mark the General Mills' brand's first work from the Joan Agency and feature voiceover by actor John Lithgow. The Progresso spots show off the brand's new packaging featuring a redesign worked on by Hornall Anderson that marks Progresso's first big packaging makeover in more than 10 years.

The next spot set to air after one that launched the campaign in late September is "Opus" (above), which should run from Oct. 10 through mid December. Another one of four new spots set to run later in soup season is "Contained," which focuses on the brand's broth (below).

Cincinnati-based Nehemiah Manufacturing, which gives second chances to orphan brands, ex-convicts and people recovering from addictions, is branching out with a new brand – Saline Soothers. The saline-infused wipes, aimed at preventing irritation for people wiping runny noses, are something of an adult-positioned extension of the Boogie Wipes brand the company sells for kids (and their parents). With this launch, Nehemiah is also for the first time incorporating its social mission into its consumer marketing, said VP-Marketing Eric Wellinghoff. Packages of Saline Soothers include a new "2C" logo and message "Every purchase helps provide jobs for Second Chance Employees." About half of Nehemiah's 100-plus employees have done time on felony convictions or are recovering from drug and alcohol problems. Saline Soothers are backed by a video, directing people to buy the product at Walgreens and Rite Aid stores, from Molio, the Salt Lake City, Utah, agency founded by Jeff Davis, who launched Orabrush, acquired last year by DenTek. Other Nehemiah brands include P&G castoffs Downy Wrinkle Releaser, Dreft and Kandoo.

We end with a holiday note: Kids and adults alike might want to sink their teeth into the North Pole Santa displays at a handful of shopping centers this Christmas. Mall operator General Growth Properties has tapped candy seller It's Sugar to outfit the sections, branded as It'Sugar Winter Escape. The 10-year-old candy brand will fill 2,000 square feet with a host of confectionary delights, like a tree made of candy, 100,000 jelly beans, and a marshmallow snowman. The experience will be limited to five malls in Friendswood, Texas; San Antonio, Texas; Tucson, Ariz.; Newark, Del.; and Pembroke Pines, Fla. The kiosks are meant to provide another reason to draw visitors to brick-and-mortar shopping as malls face foot traffic declines.

The Lowdown has the latest on a new ranking of top sponsorship spenders and how Nike's advertising won the third quarter.