April 07, 2016 08:00 AM
The Art Institute of Chicago and Leo Burnett gave art fans the chance to rent a reproduction of Vincent van Gogh's bedroom for a night. 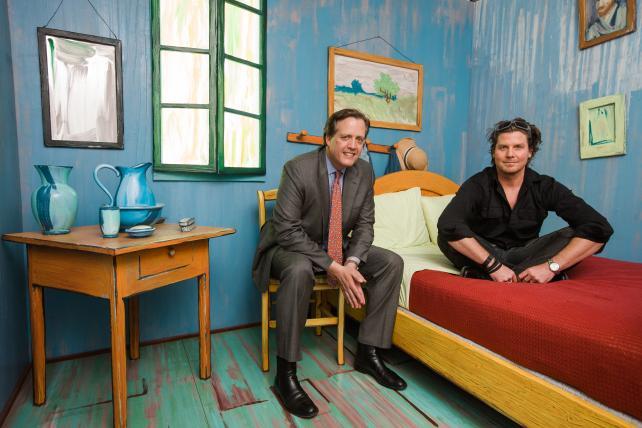 It is one thing to see a world-famous painting. It is another thing to stay in it.

That is the idea behind a creative campaign for the Art Institute of Chicago, which gave art fans the chance to rent a reproduction of Vincent van Gogh's bedroom for a night. The room rental became a key component of an overarching campaign and helped the museum see its largest influx of visitors in years, gain thousands of social media followers and capture $6 million in earned media impressions.

The painting "Van Gogh's Bedroom" is one of the most recognizable in the world. Paintings, actually. Three versions, created in 1888 and 1889, hang in Amsterdam, Paris and Chicago. In February, the Art Institute opened an expansive exhibition that brings the other two paintings to hang near the one that came into its collection in 1926.

The Idea
The Art Institute knew there would be interest in a comprehensive exhibit on Van Gogh's iconic work. Yet it needed to quickly build buzz. The exhibit, which blends art, history and technology, could only run for 12 weeks before the two other paintings returned to their owners in time for summer displays. The Art Institute turned to Leo Burnett for help finding fresh ways to draw people in.

Early on, the agency met with curator Gloria Groom to learn about her vision and inspiration. The team decided on a strategy of "Let Yourself In," a line that has been used on materials such as posters with keyholes revealing a close-up of Van Gogh or the room. "It's a voyeuristic experience of Van Gogh's life," said Mikal Pittman, senior VP-creative director at Leo Burnett.

The agency has done pro bono work for the Art Institute since 2012. Past efforts had their own unique touches. In 2014, the "Unthink Magritte" campaign for an exhibit of that artist's work included dropping on a Chicago beach a 7.5-foot tall, 1,600-pound pair of boots inspired by his "The Red Model" painting. 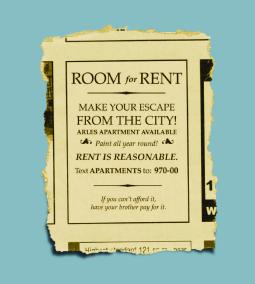 The Campaign
A few weeks before the "Van Gogh's Bedrooms" exhibit opened, posters advertising a room for rent appeared in places such as Chicago train stations. They resembled enlarged pieces torn from newspaper classifieds. Those who texted a number on the ads could engage in text chats with Leo Burnett social media staffers posing as Vincent van Gogh. Responses included "The apartment is not yet ready. Vacancies open 2/14. Text me back. We can talk existentialism and paint fumes." Another line sent by one of the six people on the project: "I love yellow things. Like fresh butter. Straw. The sun."

The museum and agency worked with Airbnb to list the room for $10, well below the price of the two exhibition tickets that come with each stay. Typically, a similar one-bedroom apartment in the building where the reproduction was located would cost well over $100 per night.

Gordon Montgomery, VP-marketing and public affairs at the Art Institute, said the idea was not to make money, but to create buzz. On that measure, it succeeded.

News of the room, which rented its first batch of nights in minutes, generated more than 500 million media impressions and nearly $6 million in earned media. Even Mr. Montgomery, who has led the museum's marketing and public affairs since 2012, has been a chief marketing officer and spent 16 years at Leo Burnett, said he could not have predicted the volume of media mentions, from outlets including NBC's "Today" and Time magazine.

The museum had its biggest opening weekend ever when the exhibition opened Feb. 14, with 14,608 visitors during the first three days. Average daily attendance for the opening was almost 70% higher than anticipated. The museum has had its largest daily exhibition attendance in 15 years. And online ticket sales soared in February to their highest level ever. The Art Institute gained 2,500 Facebook followers in the two days following the launch. 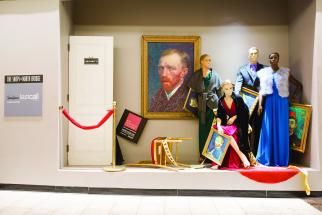 To generate more attention, a contest was held in which 30 or so shops and other businesses decorated displays inspired by "Van Gogh's Bedrooms." The windows contest, which has different themes each year, is put on by the Art Institute, Michigan Avenue magazine and Oak Street Design. This year's people's choice winner was the AT&T store.

Campaign costs were not shared, but Mr. Pittman said it was well below a typical product campaign.

The Room
The room took weeks to put together. It was designed by Ravenswood Studio, which also built the Magritte feet in 2014 and often designs sets for opera companies. It used a similar approach for the Van Gogh bedroom, creating the flats, or set pieces, in its Lincolnwood, Ill., workshop before assembling the three walls, flooring, furniture and accessories in a downtown Chicago apartment.

"We were thinking in terms of a set, basically, in order to create Van Gogh's bedroom," said Rich Walthers, senior strategist at Ravenswood Studio. "You were trying to replicate something and turn something that was a flat into a life-size room."

The team on the project included painters Ralph Scotese and Rosie Stewart and carpenters Brian Kopola and Tom Daniel, whose task was to make the room as faithful to the painting as possible, yet livable. They worked almost exclusively from the painting, trying to match the various shades and lines. The walls are slightly askew. The table has legs that are slightly different, meant to match what Van Gogh had painted. One exception to scale and detail is the bed, which appears larger than the one in the painting. That's because the apartment bed was built to accommodate a standard double mattress.

A print of the painting from the Art Institute's collection hangs on the right wall at the bedroom's entrance, so one can look back and forth to see the level of detail in the space, such as where the various shades of colors appear, or how the window panes are open at the same angle. Paint was mixed with other materials such as joint compound or glue to make brushstrokes stand out on the walls and furniture as they do in the painting. Most items on the table are attached, except for a bar of mock soap that can be picked up. Extra pitchers and basins were painted, just in case one breaks, Mr. Walthers said.

Last one for the night. Come back anytime, MTV viewers. #vangoghbnb

Zach Hock, a 26-year-old who designs fireworks shows, jumped at the chance to fly in from Baltimore and stay in the special Airbnb rental with his friend Sandy Vasquez. After all, Van Gogh is one of his favorite artists. He even dressed up as the painter for Halloween. He reprised the look in posts taken in the room that he posted on Instagram. In a nod to today's social-sharing world, a note in the room encourages guests to share photos with the #vangoghbnb tag.

Mr. Hock said he really liked how the table was done, but the red blanket seemed a bit plain and he had hoped the space would somehow have even more of a skewed view. He appreciated extra touches such as the large vase of sunflowers on the coffee table and a letter and basket meant to be from Van Gogh, along with two tickets to the exhibit. "They put extra touches on everything to make it feel like a really cool, authentic experience," he said.

It is one thing to see a world-famous painting. It is another thing to stay in it.