August 01, 2016 10:00 AM
Gap Inc.-owned Old Navy looks to brighten back-to-school sales with the addition of Amy Schumer in a Chandelier-created campaign. 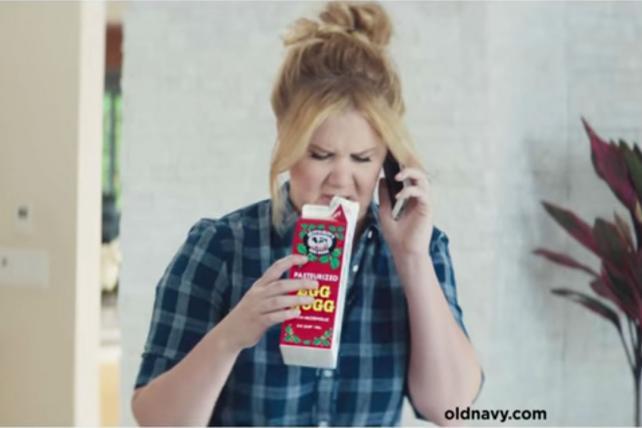 Drumroll, please. Old Navy has tapped the next female comedian to represent the brand in its marketing. Amy Schumer will join a roster that has included the likes of Elizabeth Banks, Amy Poehler and Julia Louis-Dreyfus. Fred Armisen and Carrie Brownstein, of "Portlandia" fame, recently represented the clothier in its holiday campaign. Ms. Schumer's first work will appear Monday evening as part of Gap Inc.-owned Old Navy's back-to-school campaign; in total, the comedian has signed on for a total of eight spots to air through holiday and possibly into spring.

"[Amy] speaks to women and almost everyone in a very honest way, she is body proud—those are core values that we stand for," said Liat Weingarten, senior director of Old Navy advertising. "She's so honest and humble in a way that we think really resonates with our customer."

In the first spot, which will air during "The Bachelorette" finale Monday evening, Ms. Schumer is babysitting her niece and nephew and phones some cool kids at the mall to ask advice about something called "back-to-school."

"Back-to-school is like our red carpet," says one kid, whom viewers may recognize as actor Thomas Barbusca the "Burp King of Westchester" in Netflix's "Wet Hot American Summer" series last year and a commercial regular. He recommends Old Navy, for its 60% off promotions. Ms. Schumer gives an enthusiastic "Noice" and "Stank" before she's reprimanded for her embarrassing lack of hipness. The spot, which will debut on TV in a 30-second version and digitally as a 60-second clip, includes three young influencers, Laneya Grace, Skai Jackson and Hayden Summerall, whose followings may give Old Navy a boost on the social-media circuit. Ms. Weingarten noted the importance of the "squad" or group of friends and how critical that is to kids today, who have communities outside of their families.

The San Francisco-based apparel brand worked with Chandelier Creative, as it did for its holiday campaign. Old Navy also partnered with Awesomeness TV to encourage shoppers to share their "squad" videos, and created a fundraising campaign to benefit the Boys & Girls Clubs of America and Boys & Girls Club of Canada.

Recruiting Ms. Schumer, a popular figure who has risen to prominence in recent years for her attention to a variety of issues like gender inequality, is a smart strategy for Old Navy, which, like its parent company, has been plagued by a slowdown in shopper spending. Ms. Schumer has also recently appeared in advertising for Bud Light.

Old Navy, which has more than 1,000 global locations, is still on the hunt for a chief marketing officer to replace Ivan Wicksteed, who departed in March after three years with the brand. Long the bright spot of Gap Inc.'s portfolio, the 22-year-old chain has struggled in recent quarters with sales, but did see a rise in June of 5% in same-store sales.

Ms. Weingarten declined to say how much the chain is spending on its back-to-school effort this year, but did note that while the price is similar to last year, the brand is devoting more dollars to digital. In 2015, Old Navy spent $24.7 million on measured media in the U.S. between July and September, according to Kantar Media.

Amy Schumer will join a roster that has included Elizabeth Banks, Amy Poehler and Julia Louis-Dreyfus.