August 24, 2016 10:00 AM
The privately-run city park is among other public spaces across the globe that have used mobile data to learn more about visitors and woo advertisers. 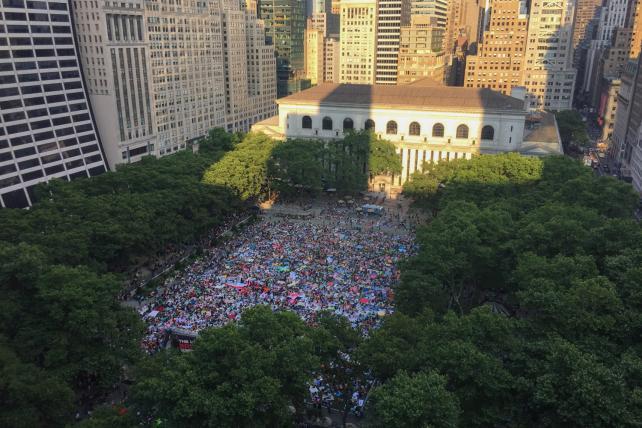 Just about anyone who's worked in midtown Manhattan or visited the impressive New York Public Library on 5th Ave has spent break or rest time at Bryant Park, which sits adjacent to the library between 40th and 42nd streets on 6th Ave.

Turns out, though, 65% of visitors to the park commute to the tree-lined refuge from outside Manhattan and 16% are from outside the New York City area all together. This is data the Bryant Park Corporation recently received and it is already making its way into sales pitches to potential sponsors. The privately run city park is among other parks and public spaces across the globe that have used mobile data to learn more about visitors and woo advertisers.

Mr. Castellan said he's referenced the data about park visitors from PlaceIQ "numerous times" in sales pitches, particularly with potential sponsors that need convincing they'll reach the desired audience if they partner with the nine-acre park. Turns out Bryant Park Corporation and PlaceIQ have offices in the same 5 Bryant Park location and share an elevator bank there.

PlaceIQ found that the average park visitor is 25-44 years old, 50% more likely to go to Macy's, and twice as likely to go to PetSmart and bank at Bank of America. The data company harvested location and demographic data about visitors to Bryant Park between May 2015 and April 2016 to determine what types of people were attending morning yoga on the lawn, HBO-sponsored film events and Bank of America Winter Village, which attracts between 3 million to 4 million ice-skaters and holiday shoppers from late October through early March.

The location data firm tracks when mobile devices show up at retail shops, car dealerships, grocery stores and eateries and attaches an anonymized ID to those devices. The company uses mobile app location data -- the information consumers allow access to when they download most free mobile applications -- to detect when devices are present at specific locations.

Bryant Park is not alone in its mobile data collection efforts. London's massive 350-acre Hyde Park worked with digital communications firm EE to collect aggregated, anonymized mobile data from visitors between August 2014 and August 2015, according to a Guardian report.

The PlaceIQ data is aiding Mr. Castellan in current discussions with a potential advertiser regarding a Winter Village sponsorship. At first the brand was skeptical about the number of visitors to the park during cold weather months, but the PlaceIQ data shows that wintertime is popular there. "We said, 'No, actually you do want December," he said. "We know for a fact that December is prime time for us."

"A lot of those brands really help us keep the park active," said Mr. Castellan, noting that Southwest Airlines sponsors a lounge area and restaurant in the park's Fountain Terrace area. "An active space is a safe space," he added.

Safety remains a concern for the Bryant Park Corporation, which was founded in 1980 to rehabilitate the once-dangerous park, which by the '70s had become overrun with drug dealers and prostitutes, and attained the unfortunate nickname "Needle Park."

Today, the park aims for sponsor dollars from companies such as home improvement retailers and lawn care brands that may not realize many visitors actually are not from the cramped city but rather more likely to own homes and tend to lawns.

Since November 2015, Utah Office of Tourism has worked with Arrivalist, a company that gleans location and demographic data from mobile app data aggregators to help clients learn about who's visiting their locales and to isolate potential niche growth markets. Utah used the company's data to measure whether people who saw their ads on TripAdvisor showed up in the Beehive state. According to Jay Kinghorn, director of communications and digital strategy for Utah Office of Tourism, the state's marketing agency has tracked whether people visited specific spots such as Bryce Canyon National Park, home to other-worldly rock formations.

Fort Worth Convention and Visitors Bureau used Arrivalist data to determine that it had a potential market for visitors in St. Louis. As a result, the city dispatched line dancers from its famed honky tonk, Billy Bob's Texas, to the Taste of St. Louis to promote the Dallas-area city.

Despite the fact that most mobile location data providers do not collect or use personally identifiable data, people are not always comfortable with such tracking in public spaces. In 2014 a Buzzfeed article about pay phone booth ad firm Titan employing mobile beacons to communicate with people's phones caused such a stir that hours after the story published, New York City Hall asked that the firm to remove the proximity sensors.

Mr. Castellan said he is confident that PlaceIQ's technology does not infringe on the privacy of Bryant Park visitors because the data it gathers is not personally identifiable. However, he did admit that some people are uncomfortable with branding in the park. "Whenever you bring a brand into a public space it can be a sensitive issue," he said.

Public spaces across the globe are using aggregated, anonymized mobile data to learn about their visitors' ages, shopping habits and more.