Eggo Gives Fans What They Were Hungering for: Waffle Emojis

Eggo is the latest brand to release its own emojis, including a batch cooked up with the help of some big social media waffle fans. 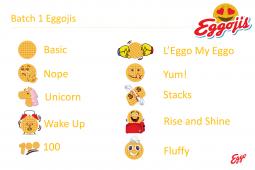 Over a 90-day period last year, Eggo saw nearly 1,000 mentions of people hankering for a waffle emoji. With International Waffle Day approaching on March 25, it is now releasing "Eggojis," the Eggo version of emojis with waffle images.

"Millennials are a big audience for us," said Trinh Le, marketing director, frozen breakfast brand and innovation at Kellogg.

Knowing there are already a lot of brands in the emoji space, Eggo wanted to figure out a way to do something a bit differently. Or, as Ms. Le puts it, "what is the Eggo way of bringing this to life?" 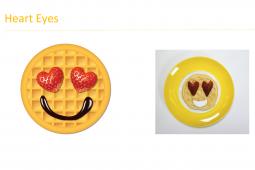 So the brand brought social influencers to the original Eggo factory in San Jose, Calif., where they spent part of their visit creating their own emoji-style art using real waffles and toppings, she said. Then, agency partner Mosaic took pictures of those waffle creations and digitized them, giving them the more cartoon-like emoji feel. In all, about 20 Eggojis will be released.

Eggo just began posting on Twitter in late February. Since then, it has been teasing the idea of waffle emojis. Users could vote in a custom poll on one of two Twitter Eggojis. The winner will be unveiled on March 25, and the winning Eggoji will show up when people post tweets that include #LeggoMyEggo.

The campaign comes as the brand has been airing Leo Burnett commercials that put a bit of a social media-infused twist on the "L'Eggo my Eggo" line used since 1972. In one recent spot a mom, dad, daughter and son are all texting, snapping photos and otherwise using their devices as they wait for the waffles to toast. Eggojis are not seen in those spots.

For now, there are no plans to use Eggojis or video from the San Jose event in the TV campaign, but they may be used online. Eggo is also talking with its agencies about how it might be able to bring Eggojis down to the purchase level, Ms. Le said.

The Eggojis rollout began with sort of a soft launch on the Kik, Paltalk, and Tango apps in the Swyft network. They are now available for Android and should be released for Apple devices beginning on March 17, Kellogg said.

Kellogg worked with Mosaic on the project, along with VML as digital agency and Starcom as media agency.

Kellogg's Eggo brand just joined Twitter in February. Now, it has its own line of emojis, or Eggojis.