TV is still "very, very critical for our business," he said during a wide-ranging presentation at a beverage industry conference in New York put on by trade publication Beverage Digest. To prove his point, he showed a slide declaring that "TV still offers the best ROI across media channels." The data on the slide was somewhat dated -- from 2014 -- but it showed Coca-Cola's TV investment returning $2.13 for every dollar spent on TV, compared with $1.26 for digital.

"We are very seriously trying to transform our company to make it a digital company, but it's not just to put ads in social media," he said. He showed a slide that stated: "Social media is the strategy for those who don't have a true digital strategy."

Coca-Cola is the world's 13th-largest ad spender, shelling out $3.9 billion in 2015, according to the Ad Age Datacenter. So any change the company makes in its media strategy will be felt by its myriad agency partners, as well as by digital publishers and social media outlets that carry Coke ads. 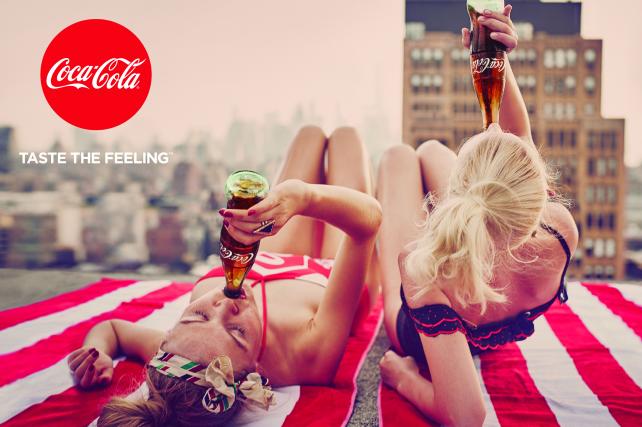 Coke is by no means is de-emphasizing digital, or spending less. But the company is rethinking its approach to make it more efficient and less scattered. In digital, "we are investing big amounts of money," but "historically probably not in the smartest way," Mr. de Quinto said. He gave one example: Coke runs an estimated 300 apps worldwide, "but most of these apps, they have less than 50,000 users or 100,000 users. That is nothing," he said.

Coke's new digital approach will be led by David Godsman, a former Bank of America executive who on Dec. 5 joined Coca-Cola in the newly created role of chief digital marketing officer. At Bank of America, Mr. Godsman oversaw emerging payment solutions and commerce capabilities. At Coke, he will be charged with leading "the digital transformation of global marketing and align our system around a single digital marketing agenda," Mr. de Quinto stated in a memo to Coca-Cola employees this week announcing the hire.

TV ads have played a key role powering Coke's "Taste the Feeling" campaign, which launched in January. The effort, which was led by Mr. de Quinto, is part of a major strategic shift by which Coke is taking a "one-brand" approach uniting multiple varieties like Diet Coke and Coke Zero in a single global campaign, rather than running disparate spots. The ads also make a concerted effort to put Coke bottles and cans at the center of every ad. That is a departure from the previous campaign, "Open Happiness," which often pursued loftier concepts with the product sometimes playing a supporting role.

Mr. de Qunito -- a longtime Coke employee who took the CMO role about two years ago -- has a philosophy that Coke's marketing should balance brand values with product benefits. That translates into ads that seek to tell a story, but also nearly every scene shows people drinking Coke. "If you want people to love to drink Coca-Cola, please show in your commercial people who love drinking Coca-Cola," he said during his presentation, after mocking an old "Open Happiness" spot that barely showed the product. "We are re-Coca-Colizing Coca-Cola. We are going to the roots of what made this brand big," he said.

To illustrate the approach, he showed an ad called "Break Up" that debuted earlier this year.

"The brand values make people love your brand more. But if you don't explain to the new generations what the category is for, all the other categories will start attacking you," he said.

He added: "Some people were thinking that it is very complex to deliver both things in the same commercial." He disagrees. "If one agency tells me that I have choose between one or the other, my election is clear -- I will change the agency."

Mr. de Quinto's approach has been to rely on a roster of numerous agencies for "Taste the Feeling," rather than hand it over to a single lead shop. Agencies that worked on the campaign launch included Ogilvy New York, Sra. Rushmore of Madrid, Santo of Buenos Aires and Mercado-McCann of Argentina. Other Coke shops, such as Wieden & Kennedy, have been tapped along the way.

"We don't have one agency of the record for any of our brands," Mr. de Quinto said. "We are doing constant pitches with a roster of agencies. If there is an agency that is on the roster and they don't win anything that is their problem. If they want to step down, they can step down. We will continue working with the others."

Mr. de Quinto spoke Friday morning almost immediately after Coca-Cola announced that CEO Muhtar Kent will step down in May after eight years at the top. His replacement is James Quincey, 51, who is currently Coke's chief operating officer.

Mr. de Quinto suggested he has strong ties with the incoming CEO, including from when Mr. Quincey held Coke roles in Europe. Before taking the chief operating officer role in late 2015, Mr. Quincey was president of Coca-Cola 's Europe Group. He was president of the Northwest Europe & Nordics business unit from 2008 to 2012.

Before taking the CMO job in 2015, Mr. de Quinto for 14 years led Coca-Cola's Iberia business unit, which covers Spain and Portugal. His native tongue is Spanish. From the stage on Friday, he admitted his English is "pretty bad." So the nice thing about Mr. Quincey, he said, is that "he is absolutely fluent in Spanish."

Marcos de Quinto told an industry event that Coke's digital strategy has not been smart.