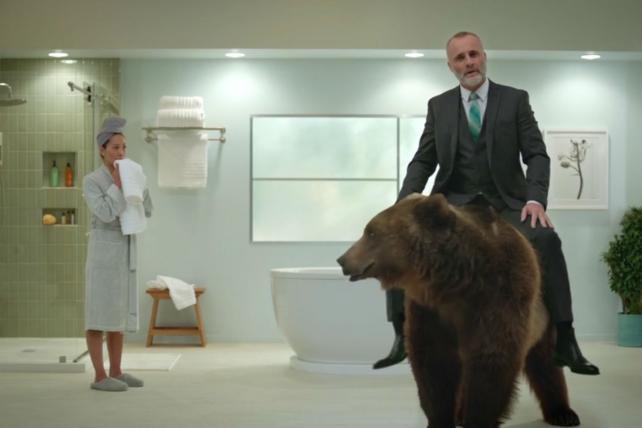 Build.com is putting a bear on it. Making the most of a metaphor, the 16-year-old online retailer is airing a series of spots featuring the 700-pound, furred animal as part of a campaign about taming the "bear" of home improvement projects.

Beginning April 8, Chico, Calif.-based Build.com will air three 30-second spots on national TV. Character actor Tim Murphy stars alongside the bear as both tout the benefits of using one of Build.com's 200-plus product experts in home renovation projects such as creating a spa-like bathroom or a French country kitchen. Mr. Murphy, known for roles in "Sons of Anarchy" and "True Detective," is featured as the brand's "Chief Buildologist."

"There is a tremendous amount of fear and anxiety when it comes to home improvement," explained Danielle Porto Mohn, who joined Build.com as chief marketing officer last year from Petco. "Home improvement can be a real bear, but we help you to tame that beast and the spots are rooted in that analogy."

Wolsely-owned Build.com worked with San Diego-based Vitro on the campaign, which Ms. Porto Mohn noted is the retailer's first comprehensive brand campaign. In the past, Build.com has aired direct-response television ads only. The company competes with home improvement giants Lowe's and Home Depot, retailers with 1,857 and 2,200 locations, respectively.

"We know homeowners are incredibly passionate about home improvement, but it can also be a really stressful experience," said John Vitro, creative chairman of Vitro. "That's why we're highlighting the fact that Build.com's human-concierge approach provides a level of sophistication and service that's missing in the rest of the industry -- which is crucial as consumers have grown to expect a higher level of customization and attention from brands."

Build.com plans to promote the effort through social media and also include images in its catalogs, which drop four times a year. Included in the campaign is a redesigned logo, which features an open door to communicate to consumers that Build.com associates are always available. In addition, the retailer is running a "Win the Look" sweepstakes where winners can win either the spa or French country kitchen -- both are $10,000 in value.

Ms. Porto Mohn declined to specify how much Build.com is spending on the new campaign, but said that it is an increase of well over 100% compared with last year. According to Kantar Media, Build.com spent $1.2 million on U.S. measured media in 2015.

The new ads will run through the end of the year.

The company takes on Lowe's, Home Depot with new capaign from Vitro.