What It Costs: Ad Prices From TV's Biggest Buys to the Smallest Screens

Sticker shock. Annoyance. Envy. Amazement. No matter where you sit in the marketing ecosystem -- whether you're a buyer or seller of media, or both -- you're likely to experience a range of reactions and emotions as you browse thorugh this sample from our inaugural What It Costs package. If you also end up feeling a fresh surge of curiosity -- about the price tags for other media products and placements -- the good news is that the following sample is just the beginning; What It Costs will live on as an ever-expanding weekly feature in Ad Age's soon-to-relaunch DataCenter.

The average outlay for a commercial during the fifth season of AMC's "The Walking Dead," making it the costliest scripted series on TV. The Oct. 12, 2014, season premiere drew 17.3 million viewers; the March 29 season finale, 15.8 million.

According to averages from media buyers compiled by Ad Age during the upfronts; ratings according to Nielsen.

According to media buyers interviewed by Ad Age, January 2015.

The cost for a thousand impressions on Hulu for standard run-of-site in-stream video ads, with a minimum requirement of two ads per campaign. 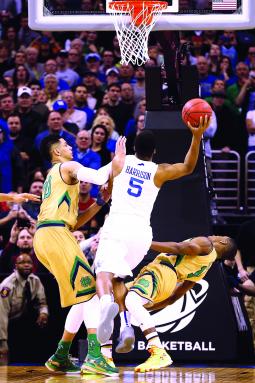 According to Kantar Media, Nielsen and media buyers interviewed by Ad Age.

The average cost of a 30-second commercial during "The Big Bang Theory" on CBS, the most expensive comedy on TV. "Big Bang" averaged 16.7 million viewers this season through March 12.

According to Ad Age interviews with media buyers during the 2014 upfronts; audience according to Nielsen

The cost of one full-color ad on the front page of The New York Times. To appear on the Times' front page, though, marketers must commit to a certain frequency, such as front-page ads every Tuesday for six months; the total cost of running frequent page-one ads would likely top $1 million.

According to current and former Times executives interviewed by Ad Age, March 2015.

The cost of a thousand impressions for a sponsored photo on Instagram, down from $40 in 2013 when Instagram first rolled out ads. Instagram says more than 300 million people around the world check out the photo-sharing app each month. Instagram's minimum ad spend is $200,000.

According to rate cards provided to media buyers by Instagram in spring 2015, before any discounts; minimum spend is according to a media buyer interviewed by Ad Age, March 2015.

The cost of a thousand impressions for a sponsored video on Instagram.

According to rate cards provided to media buyers by Instagram in spring 2015, before any discounts.

According to sources familiar with the sign's cost as of March 2015.

More to come as the series progresses.

Sticker shock. Annoyance. Envy. Amazement. This new series will deliver all that and more.