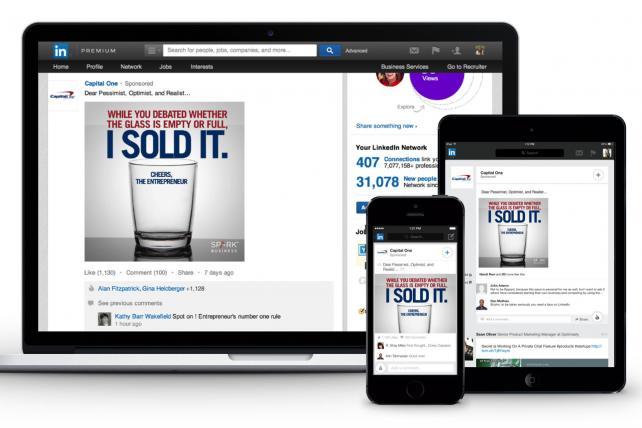 LinkedIn generated revenue of $119 million selling ads during the first three months of 2015, a 38% increase over the year-earlier period, the company said Thursday. But the outlook for the second quarter and full year was weaker than expected, and headwinds for display ad sales meant a lot rides on the continued expansion of LinkedIn's sponsored posts.

"With respect to display, we began to see steeper deterioration in the first quarter," Steve Sordello, LinkedIn's chief financial officer, said during a call with investors. "This reverses display's relative strength throughout 2014, with growth declining approximately 10 percent year-over-year."

Display ad revenue was particularly impacted in Europe, he said, citing a shift toward automated ad-buying.

"Going forward, display will remain an important component of our product suite, albeit with lessening impact on the business," Mr. Sordello added.

The first quarter marked the first time "traditional on-site ads" comprised less than 50% of the company's ad business, according to Mr. Sordello. That trend is expected to continue.

The company's Sponsored Updates, a content-marketing product that lets advertisers place their blog posts on LinkedIn members' home pages, grew to more than 40% of ad revenue, nearly double their share a year earlier.

Sponsored updates at LinkedIn will continue to grow at a "healthy rate," according to Mr. Sordello.

Media companies of all stripes have seen their digital-ad sales slump, at one time or another, as advertisers shift to automated ad-buying, which can drive down rates. But publishers have adjusted to this new reality in a variety of ways, one of which is to sell content-marketing products, such as native ads, that mimic editorial content in text and video.

Total revenue at LinkedIn in the first quarter was $638 million, up 35%.