June 02, 2015 08:00 PM
Print advertising is expected to fall sharply at both newspapers and magazines, but digital gains will help stem losses at glossies. 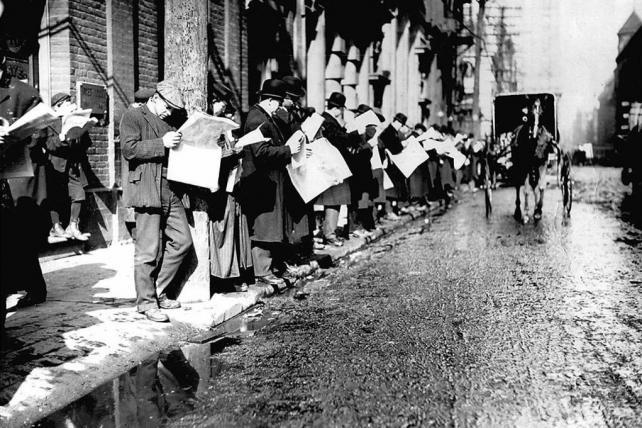 Traditional media companies will continue to feel a financial squeeze over the next four years, as flat or declining revenues are expected at magazine and newspaper publishers even as they post gains in digital advertising and subscriptions, a new report shows.

Consumer magazine revenue will be essentially flat this year at nearly $24.6 billion compared with 2014, according to the annual Global Entertainment and Media Outlook from PricewaterhouseCoopers, which was released on Tuesday. It will climb to approximately $24.7 billion by 2019, PricewaterhouseCoopers predicted.

During that time, overall ad sales are expected to rise at a combined annual growth rate of less than half a percent, reaching $17 billion.

"While advertisers up to now have been slow to remove magazines from their media plans, the market for magazine advertising will be sluggish in the future," the report said.

Circulation revenue is forecast to fall by half a percent over the next four years to $7.7 billion.

"The future industry outlook remains challenging, as burgeoning digital revenue only just counteracts the declines in print," the report said.

Magazine companies have looked to digital advertising to stem print losses, but print remains their primary source of revenue. For instance, Time Inc., the nation's largest magazine publisher, generates just 20% of its ad sales from digital.

But the PwC report points out that digital ad revenue will eclipse print by 2019, due to both digital advertising's sharp increase and print's continual decline.

Newspaper losses
Digital-ad gains won't offset print losses at newspapers, however. "It is clear that advertisers are not returning to newspapers," the report coldly states.

Advertising revenue at newspaper companies this year is expected to be about $20 billion, down more than $5 billion from 2010. It is expected to fall at a combined annual growth rate of 5.5% to about $16 billion by 2019.

Print declines will fuel the losses, with print dropping at a combined annual growth rate of nearly 9% through 2019. Digital advertising helps offset some of the losses, increasing 3.4% over the next four years. But digital will be only about a third of print ad revenue.

Total newspaper revenue will decline by almost a billion dollars this year compared with 2014, hitting $31.6 billion. The downward trend continues through 2019, falling at a combined annual growth rate of 3% to about $28 billion.

A handful of large daily newspapers, including The New York Times, now make more money from readers than advertisers, but, in the U.S. at least, that is the exception. (A recent study of newspapers in more than 70 countries from the World Association of Newspapers and News Publishers found that circulation had overtaken advertising as the primary source of revenue.)

The modest uptick in circulation, according to the PwC report, is thanks to both a boost in newspaper cover prices as well as digital paywalls. But the PwC report cast some doubt over both strategies. It questioned the long-term viability of charging more dollars from "an ever-diminishing pool of the most loyal readers."

And the report had this to say about digital paywalls: "While digital subscriber sign-ups look impressive in the near term from their original small base, the long-term outlook for this channel looks less favorable. A big question mark remains over the possible ceiling that even those publications deemed successful at the model may hit sooner rather than later."

Print advertising is expected to fall sharply at both newspapers and magazines, but digital gains will help stem losses at glossies.