Another Round of Web Redesigns Brought to You by 'Viewability'

March 09, 2015 12:15 PM
Viewability is the latest watchword in advertising and digital publishing, and much like native advertising in early 2014, marketers are clamoring for it.
The newly redesigned Wired.com.
Credit:

Facing pressure from advertisers, dozens of media companies are reevaluating where display ads appear on their web and mobile sites to ensure visitors can actually see them. And it's become a key element for publishers looking to redesign their sites.

"A significant portion of the publishers we talk to are actively redesigning all of or part of their sites and all of them are taking viewability into account," said Jonah Goodhart, CEO of analytics firm Moat, which measures viewability and advises publishers and marketers.

The term "viewability" refers to whether people visiting a web or mobile site, or watching a digital video, can actually see an ad. It's the latest watchword in advertising and digital publishing, and much like native advertising in early 2014, marketers are clamoring for it.

"It comes up every day ... much like a year ago, when the conversation was all around native content," said Paul Caine, global chief revenue officer at Bloomberg Media, which introduced a dramatic digital redesign to its flagship site in January.

Bloomberg didn't overhaul its site to appease the advertising community, he added, but "viewability was considered from the start."

Viewability surge
A year ago, however, ad viewability was less a priority for website makeovers. Redesigns were aimed at making sites look pretty on phones and carving out slots for native ads, which mimic editorial articles and videos. While these remain critical to publishers, the importance of viewability has surged.

That's because advertisers and the agencies that buy ads for them are pushing media companies to meet -- even exceed -- a standard set by the Media Ratings Council last March. This viewability standard says a digital display ad is considered viewable when half of its pixels appear on screen for at least one second.

During the fourth quarter, an average of 50% of display ads served on publishers' desktop sites met this viewability standard, according to a Moat analysis of more than 10,000 publishers' sites.

Conde Nast, publisher of glossy magazines like Vogue and Vanity Fair, took the standard many steps further when it struck an agreement last December with media-buying giant GroupM promising to charge only for ads that are 100% viewable.

Put ads next to content
Conde Nast also owns Wired, which introduced a major redesign of its website last week. Wired has the largest digital audience among all Conde Nast print titles and its revenue reflects that -- more than half the brand's ad sales come from its online platforms, including Wired.com and its tablet edition.

The impetus for Wired's redesign wasn't too allay advertisers' viewability concerns, according to Kim Kelleher, Wired's publisher. But viewability was "a big priority for us and integral to the whole philosophy of the redesign," she said. A 300-by-600 display ad on Wired's article pages, for instance, remain anchored in place as readers scroll down an article to ensure it remains in view.

Mr. Goodhart at Moat said publishers should place display ads next to editorial content. "If there's a big separation between the ad and the meat of a story, then the viewability score is low," he said.

Highly 'viewable' ads
Data provided by Moat, which analyzes ad viewability across more than 10,000 sites, proves this out. The type of ad that achieved the lowest in-view rate -- meaning at least half its pixels were viewable for at least one second -- were 728 x 90 leaderboard ads, which run near the top or bottom of websites. Just 45% of those ads served during the last three months of 2014 were in view. 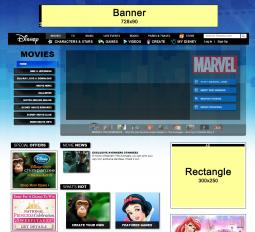 An example of a leaderboard ad unit.

The reason these ads performed so poorly is two-fold: some leaderboards are below an article's comments section, where visitors rarely venture. But leaderboards atop a webpage suffer from a different problem. Many readers land on a page and quickly scroll down to the beginning of an article.

Meanwhile, large ads that ran down the right side of websites next to an article's content were the most viewable, with 69% of these ads -- which are 300 pixels by 1050 pixels -- served during the fourth quarter considered viewable, according to the Moat analysis.

It's this year's 'native.' And with marketers clamoring for viewability, publishers are hearing about it 'every day.'