January 30, 2015 10:00 AM
As marketers get more serious about real-time content during big events like the Super Bowl, agencies don't need to work quite as hard to sell their war rooms. 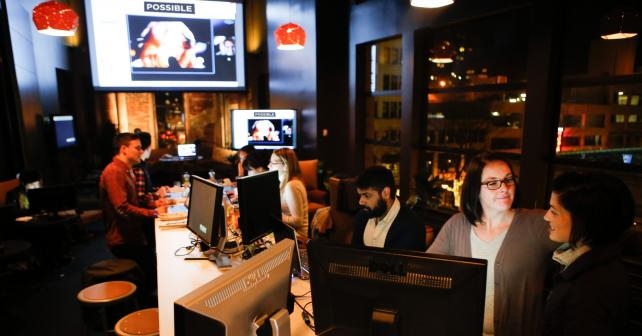 Agencies and brands, what are you doing to prepare for the Super Bowl? Answer us on Twitter: #superbowlprep.

If marketers once resisted their agencies' suggestions to staff a "war room" during the Super Bowl, the 2013 mid-game blackout put an end to that. Oreo's quick tweet -- "Power out? No Problem. You can still dunk in the dark" -- showed that opportunities would be missed, and crises mishandled, if decision-makers spent Super Bowl Sunday at home or with friends. The annual national TV party had officially become a work day.

This year, Anheuser-Busch Inbev is maintaining four "war rooms" around the country, including half a floor at the New York office of Anomaly, its lead creative agency. There, the shop is housing client executives; staff from its own creative, production, communications strategy, social and account management groups; people from the brewer's other social and media buying agencies; and representatives of media partners like Facebook and Google.

The beer giant is also assembling teams in Phoenix, at a hotel for Bud Light not too far from the stadium where the game will be played, and two at satellite campuses in St Louis, Mo., and Palo Alto, Calif.

While the rooms won't stray too far from last year's formats -- TV screens and conference tables loaded with computers -- the actual product might take new form.

"You'll see us experiment with more content types," said Azania Andrews, senior director of digital connections for North America at A-B InBev. That especially means short videos. "Over the past year we've learned a lot about video and how to do it well," she said. "We've seen that consumers are responsive to different types of content on different platforms."

She said there will also likely be more creatives in the room generating content this year.

Those lucky enough to have staffed the war room this week -- yes, it's already up and running -- may have enjoyed leftovers from the Anomaly kitchen, where celebrity chefs David Chang and Eric Ripert were filming "Avec Eric," a cooking show dreamed up by the agency.

The menu for the actual day of the game remains a matter of debate, but war room-staffers can bank on bagels and coffee in the morning, at least, and Budweiser in the afternoon, said Anomaly founding partner Jason DeLand. "It's a working party, a celebration of our industry," he said.

Kia is looking to its media agency Initiative to keep it current during the game. The Interpublic shop has hosted a war room for the client for several years, and this year it's as important as ever, with additional staff from the client's other agencies, said an Initiative spokesman. The client will also be present.

The room will take over the L.A. office's "Town Hall" space, with social community managers, designers, analytics wonks, account leads and staffers from Kia's creative agency surrounded by screens, plus food and beer (brands by MillerCoors, not a Super Bowl advertiser but an Initiative client.)

Matt Lawler, director of social media at Initiative, is also a D.J., so he's bringing his turntables.

Not just for Super Bowl advertisers
Marketers with $4.5 million spots aren't the only ones with a "working party," although they might have a little more flexibility in their game day activities.

"Two years ago the mentality was that clients had to be buying a spot to be ready for the Super Bowl," said Shane Atchison, CEO of WPP digital agency Possible. "This year, it's a little more matter-of-fact, with some clients on Skype so they can still watch their game and be with their families, and some truly coming into the office."

"There's a process," he added. "That wasn't covered in the past."

More than 10 of the agency's clients will be getting in on the action at various Possible offices, Mr. Atchison said. None are Super Bowl advertisers this year, and most are new to Super Bowl Sunday war rooms too. One of the shop's big clients will be pushing out digital content for two of its brands via Possible's war rooms for the first time.

"We have more permission to talk to people with more followers and connections in social each year," said Mr. Atchison. "Earned media is easier to activate. You can reach more people at the press of a button."

Much of the creative work is meant to happen in real-time, but the shop is thinking ahead about content around high-profile athletes that received a lot of attention last year, like the Seattle Seahawks' Richard Sherman and Russell Wilson.

While Possible will have rooms in Cincinatti, New York and Seattle totally focused on the data, real-time content and digital buying, the shop is also banking on more casual office parties with almost "20 creatives" around. They'll support the working team should the chance arise. "There's power in the collective," Mr. Atchison said.

Rather, his staffers will focus on content they prepare in advance, and then a small group working on Sunday will customize it in real time. The shop will create content around the 12 to 15 plays or outcomes it can predict, for example, be it a crazy catch, fumble or trick play. It can then tweak it to fit a particular brand.

Relevant 24 is also creating more content leading up to the game than usual, "to start to tell the story so you don't show up cold," said Mr. Gallucci.

"We're not just reacting to a moment when the lights go out. That's not the plan," he said.

Keep an eye on AdAge.com on Sunday night, when we'll be covering the best (and worst) of Super Bowl real-time marketing. And don't forget to check out last year's classic report, "Go Home Real-Time Marketing. You're Drunk."

Anheuser-Busch Inbev is planning four war rooms around the country, including one at Anomaly New York.