April 29, 2014 11:20 PM
Conde Nast Entertainment is introducing The Scene, a Hulu for premium digital-only videos. It's also rolling out 100 video series this year. 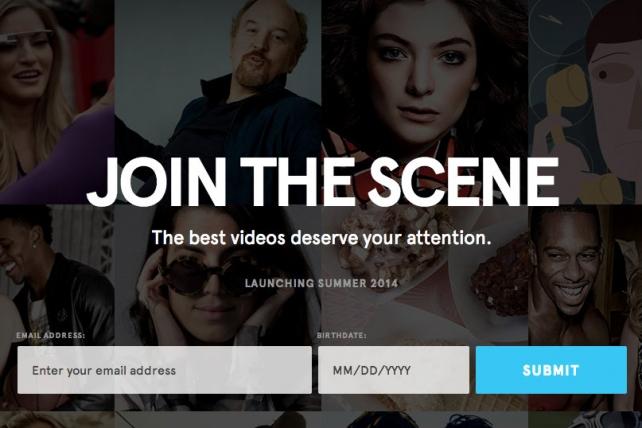 The Scene, a new site from Conde Nast Entertainment, will be home to premium digital-only video.
Credit:

Distribution is the gray cloud looming over publishers' digital video efforts: How do they get their videos in front of enough people to satisfy advertisers? The answer for many, so far, has been to partner with large portals like Yahoo and AOL that deliver eyeballs but take a cut of the revenue.

Conde Nast Entertainment -- the video division of magazine publisher Conde Nast -- relies partly on a distribution network of 25 digital platforms to drive views. Now it's trying to join the portal game from the inside with The Scene, a digital warehouse that will curate "premium digital-first video content" from Conde Nast and other media brands, Fred Santarpia, chief digital officer at Conde Nast Entertainment, said at the company's NewFront presentation.

Think of it as a Hulu for videos produced exclusively for digital-media platforms.

What's missing, however, is exactly how Conde Nast Entertainment will drive viewers to The Scene, which rolls out in July. After Tuesday's presentation, Mr. Santarpia said the company will market the site with a mix of ads, social media, promotion on Conde Nast properties and public relations.

Last year, Conde Nast tried to lure advertisers by promising to match each dollar spent on production with a dollar on marketing and promotion, but this seems more ambitious.

The Scene "addresses a void in the marketplace," Mr. Santarpia said. There are plenty of large portals for user-generated content and cat videos, he explained, as well as sites that repurpose TV. The Scene is meant to showcase high-quality digital-native videos so they don't lost in the ocean of TV shows and user-generated stuff. In addition to Conde Nast Entertainment, video providers on the site will include ABC News, BuzzFeed, Major League Soccer, Weather Channel Films, Variety and the comedy site Jash, Conde Nast said.

Tuesday marked Conde Nast's second NewFront, and it brought the kind of high gloss one might expect from the publisher of Vogue and Vanity Fair. The NewFronts are a series of pitches by digital publishers seeking TV ad budgets partly by imitating TV's long-running upfronts, where TV networks promote upcoming shows to ad buyers. But digital publishers haven't quite pulled it off yet, typically offering shows that don't seem to make much of a dent on consumer consciousness once they arrive.

Conde Nast Entertainment is led by former CW President Dawn Ostroff with the aim of both developing magazine stories into TV and movie projects and creating digital video channels around the company's magazine brands.

Already, some of its its web videos have earned accolades, including a Producers Guild of America Award for "Wired: What's Inside," an Emmy nomination for GQ's docuseries "Casualties of the Gridiron" and 14 Webby nominations. Next month all of its videos combined will reach 1 billion views, the company said.

Unlike a TV network, Conde Nast Entertainment videos comes in a variety of lengths and formats. Here, for example, is a five-minute video from the Vogue channel with actress Sarah Jessica Parker.

Conde Nast might be relatively new to the game, but it's not underfunded. It has spent about $50 million building the division, according to an employee with direct knowledge of the matter. With that money it's rolling out an ambitious slate of 100 new series across 14 channels, including three channels bowing in 2014: Bon Appetit, The New Yorker and Lucky.

Like TV, of course, many attempts fail. Conde Nast renewed 21 of the 70 series it wound up rolling out last year, with returning entries including Glamour's "Single Life," GQ's "American Bartender," Self's "Which is Worse" and Wired's "Angry Nerd." There's also a voluminous lineup of new programming that includes culinary shows from Bon Appetit and Epicurious.com, as well as "Strictly Ballet," which takes viewers inside the School of the American Ballet, on the Teen Vogue channel.

Conde Nast, publisher of Vogue and Vanity Fair, is rolling out 100 digital-video series this year, as well as a new site to showcase them.