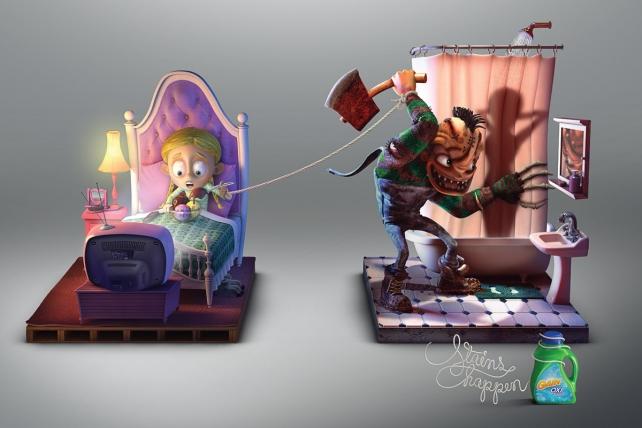 Eight U.S. agencies captured 19 awards at the Wave Festival for Latin America this week, with Chicago-based Lapiz emerging as the biggest winner from the U.S. with strong work for several Procter & Gamble brands.

"Each ad portrays a situation where somebody is about to have an accident that'll cause a stain," said Laurence Klinger, EVP-chief creative officer at Lapiz. "Stains are always about to happen." 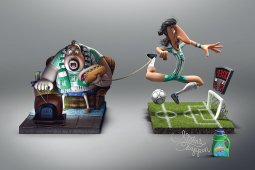 Each of the four ads in the campaign includes one picture of a person engaging in an everyday activity like watching TV or drinking tea whose arm is attached by a string to someone in a second picture who is about to cause a stain-creating accident, Mr. Klinger said. In one ad, a young woman is eating ice cream in bed while she watches a horror movie. She's connected by a string to the raised arm of the psycho killer in the next picture who is about to attack someone in the shower in a classic horror movie scene. When that happens, she'll drop her ice cream. In another ad, a man watching a soccer game while eating a hot dog is connected to the soccer player in the next picture who is about to score a goal, which will make the man drop his hot dog.

The "Stains Happen" campaign won gold, silver and bronze awards in the print category, and a silver in outdoor. In the radio category, Lapiz picked up silver awards for P&G brands Gain detergent and Clear Blue, a pregnancy test, as well as a silver and bronze for Mujeres Latinas en Accion, a non-profit that aids abused women, and a bronze for the Chicago Latino Film Festival.

Omnicom Group's Dieste won a silver cyber and a bronze PR award for "Muttbombing" for adoption service Dallas Pets Alive! The adorable pro-bono campaign grew out of a chance meeting in a Dallas park between Ciro Sarmiento, Dieste's executive creative director, and DPA during a pet adoption event. Mr. Sarmiento wanted to help, and the agency came up with the idea of grabbing selfies posted by celebrities and other influential people on Instagram, re-touching them to include a real dog available for adoption, and then re-posting the pictures. Besides registering 146 million impressions, the campaign boosted the number of dogs adopted by 55%, Mr. Sarmiento said. 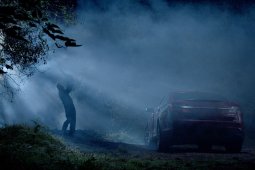 Saatchi & Saatchi's Hispanic shop Conill picked up a silver film award for its "Details" campaign for Toyota Motor Sales U.S.A.'s program for certified used vehicles by highlighting some of the 160 checkpoints that you never realize you need in a reliable car until you suddenly need them. Like automatic door locking after you've been chased to your car by an axe murderer. Conill also won a bronze mobile award for its own internal "Time Donors" campaign in which agency execs donated to volunteer work the time they shaved off meetings.

Miami-based La Comunidad took home a silver radio award, and abronze print award for the City of Buenos Aires' "Better by Bike" program to inspire people to use new bike paths. Different ads show the bike paths as body parts with bike wheels inside organs like the lungs, heart, knees and head. 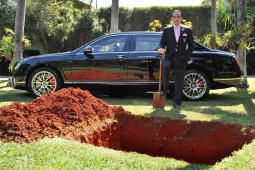 The festival's top prize, the Blue Wave, went to a bizarre publicity stunt by Sao Paulo agency Leo Burnett Tailor Made that transfixed Brazil. Eccentric and unpopular local billionaire Chiquinho Scarpa posted on Facebook that he planned to bury his $500,000 Bentley car in his backyard. Social networks exploded as Brazilians expressed their disgust at such waste. When the press corps, complete with a news helicopter buzzing overhead, turned up to witness the "Bentley Burial," Mr. Scarpa explained that "Most people bury something much more valuable than my car—their organs. That's the biggest waste." Mr. Scarpa was, in turned out, kicking off Brazil's Organ Donation week, and pledges of organ donations rose by 31.5%.

Other U.S. winners include:

Omnicom Group's Alma won a bronze design award for "Almatars," part of the Miami agency's 20th birthday celebration in February. Alma decided to send their entire agency into space to celebrate the new heights the shop has reached, and created custom-made images of each staffer to send into space and back in a journey that can be relived through a QR code.

For FedEx Express, Y&R Bravo noticed that people flip through the ads quickly when reading on an iPad. The agency used that simple swipe, and won a bronze mobile award, to show how fast FedEx can deliver from Brazil to the U.S.

Austin-based LatinWorks has been doing award-winning campaigns for years for the Cine Las Americas film festival. This time, the agency created a thriller with nine different endings on a microsite to raise $50,000 to hold the festival. The film, a cyber bronze winner, starts with a gun to the head of the film festival's executive director, and the ending becomes more elaborate as donations increase.

Eight U.S. agencies captured 19 awards at the Wave Festival for Latin America, with Lapiz the biggest U.S. winner with strong work for P&G.