You Won't See Them on the Times Twitter Feed

January 08, 2014 03:30 PM
The New York Times rolled out its first batch of native ad units Wednesday with the anticipated redesign of its website.

The New York Times rolled out its first batch of native ad units Wednesday with the anticipated redesign of its website. Dell is the first advertiser to buy into the program, which is a three-month campaign costing six-figures, according to people familiar with the Times' pitch to advertisers, though that includes both the native-ad units and traditional online banner ads. 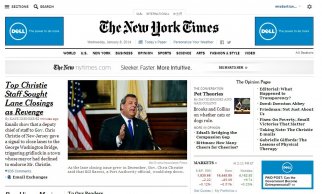 A blue box on the right side of the redesign New York Times homepage points to Dell's paid posts.

For the six-figure price tag, Dell gets a distinctly blue box on the right side of the Times' homepage that links to its native ad units, or "paid posts," as they're called on the site. Clicking the box opens a new browser window -- the URL is paidpost.nytimes.com, not nytimes.com -- where the posts reside on a page that is also clearly labeled, "Paid For and Posted by Dell." At the bottom of the page is another disclaimer: "This page was produced by the Advertising Department of The New York Times in collaboration with Dell. The news and editorial staffs of The New York Times had no role in its preparation."

Such labeling goes beyond most native ads, which typically use somewhat ambiguous language like "sponsored" or "branded" content.

"Transparency is the rule," said Stephanie Losee, managing editor of Dell global communications, of the native-ad campaign with the Times.

Such transparency might turn off other marketers interested in native advertising, which more or less aims to mimic the editorial content surrounding it. The Times' native-ad play very clearly avoids such confusion, as promised. Or put another way in a tweet from a Financial Times staffer: "As advertorial as native gets."

At the same time, however, the Times offers brands not only scale but a safe environment for their native-ad units to reside. Plus, the quality of the paid posts will be held to the Times' high editorial standards, even if they're not produced by the newsroom.

Marketers and publishers will keep a close eye on the Times' foray into the native-ad space, where the Times' entrance serves as a tacit endorsement of the emerging and controversial practice. Times CEO Mark Thompson has also said native advertising will be a salvo in the company's fight to restore growth to its limping digital ad revenue.

As the program takes flight and the Times works out the bugs in its redesign, here are five details you may not know about the latest entrant in the native-ad space.

Times staff pitched story ideas to Dell. One of Dell's first paid posts delves into the topic of millennials in the workplace. The author is a freelancer that the Times contracted, according to Ms. Losee. The millennial generation is among four topics Dell customers are interested in learning more about, she said. A Times editor -- not from its newsroom, but instead part of an internal "content studio" -- pitched ideas to Dell around these topics that weren't related to Dell products. Dell approved the story ideas, which the Times farmed out to freelancers.

Links to Dell's posts will rotate through various sections of the site during the campaign: the Times' homepage as well as its business, tech and DealBook sections. 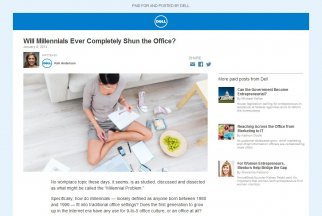 Paid posts will live forever on the Times' site. When the three-month campaign ends, Dell's paid-posts will remain on the site and discoverable through the Times' search function. A spokeswoman for the Times said paid-posts will not appear among editorial stories in search results and they will not be indexed on Google in the same way as news stories.

Paid posts will not be shared via the Times' main Twitter account or Facebook page. For the time being, social media remains a place to share editorial stories only, according to a Times spokeswoman. Readers who use the sharing tools attached to the paid posts will see a pre-generated tweet that indicates it is a "paid post." (Of course, someone could easily delete that from the tweet before hitting send.) There is also a Twitter account, @PaidPostNYT, which the Times has apparently created (though a spokeswoman was unaware of it). It's unclear how or if that will be used.

Readers cannot comment on paid posts. That is a functionality that is not part of the paid posts at this time, a Times spokeswoman said.

Dell's the first marketer to use ad units introduced with Times redesign; what it is and isn't getting for its money.