The lunch meat wars are turning into a battle of the bold.

Two years after Boar's Head launched its Boar's Head Bold lineup of intensely flavored meats, packaged-meat giant Oscar Mayer is answering with its own "bold" lineup under the Deli Fresh brand. And its ad campaign goes directly after deli-counter brands like Boar's Head.

To do so, the Kraft Foods Group-owned brand is unleashing its cantankerous Grandpa Frank character, who in a TV ad, bemoans having to wait in line for deli-counter brands, which he criticizes for being stale and "passed around more than blame at a congressional hearing."

The ad, by McGarryBowen, debuts on Monday and will be followed by other spots featuring the frank Frank "living boldly and spicing things up," according to Kraft. The Deli Fresh brand launched in 2003, but Oscar Mayer launched the bold-branded offerings just this year with flavors such as Italian Style Herb Turkey Breast and Chipotle Seasoned Chicken Breast.

Packaged brands have long made comparisons to deli-counter brands by touting convenience, while using "deli" language to suggest that their offerings are just as fresh as what's found behind the counter. With the bold line, Oscar Mayer is taking the messaging one step further by making a big flavor play.

"We want to make sure that consumers don't even have to go to the deli. A lot of our consumers shop both," said Tom Bick, Oscar Mayer's senior director-integrated marketing communications and advertising. He cited internal research suggesting that 70% of consumers surveyed do not find the flavors they want at the deli case.

Kraft projects it will spend $20 million on the campaign. Digital marketing includes using Apple's iBeacon location-targeting technology to send ads to shoppers while they are in the store on mobile devices. The mobile program might even include sending ads to people while they are standing in line at the deli counter in an attempt to lure them to the packaged aisle, Mr. Bick said. 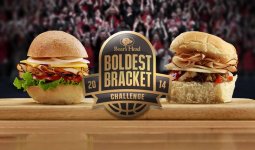 Boar's Head, a premium brand that is primarily sold at the deli counter, launched its "Bold" lineup in 2012 and has plugged it with radio and digital ads. Offerings include Habanero Ham -- which is coated with jalapeño and habanero pepper powder -- and Chipotle Chicken Breast, which sounds similar to one of Oscar Mayer's new flavors. Lately the marketer has promoted the lineup with a promotion called the "Boldest Bracket Challenge."

Is Oscar Mayer -- which is priced as a mainstream brand -- going after Boar's Head? "It's not a direct aim," Mr. Bick said. "But if we are taking volume out of Boar's Head, that's a good thing."

A Boar's Head spokeswoman did not respond to a request for comment.

As it targets the deli case, Oscar Mayer will also have to fend off competition from other packaged meat players, which are also stepping up their flavor innovations.

Hillshire Brands' Aidells brand, for example, is plugging flavors such as Chipotle Pineapple Smoked Chicken Breast. The flavor "is actually infused into the meat. So there is no other product like this in the United States," Hillshire CEO Sean Connolly said earlier this year at an investor conference.

Recently, the battle between packaged and deli-case brands has been pretty even. As of 2012, deli brands had a slight edge, with a combined 51.5% share in dollar sales in the $12.6 billion lunch-meat market, compared with 46.6% for prepackaged meat, according to the latest data from market researcher Mintel. 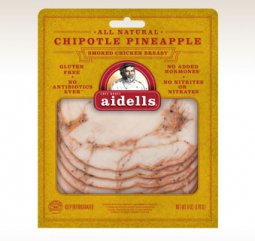 The deli business has an advantage because the personalized customer service allows for flexibility in portion sizes, sampling and "arguably perceptions of greater freshness," Mintel stated in a report. Growth in the packaged segment is expected to be driven by flavor innovation and "better-for-you" varieties with lower sodium and fat content, according to Mintel.

Kraft, with its Oscar Mayer brand, dominates the packaged refrigerated sliced lunch meat segment with a 38.6% share, according to IRI. But the marketer experienced a 2.8% sales decline for the 52-week period ending Jan. 26, to a little more than $2 billion. Hillshire, the second-largest branded competitor, had a sales decline of 9.8%, falling to $582 million, according to IRI.

The lunch meat battles are getting spicy as Oscar Mayer takes an indelicate swipe at delicatessen brands.