October 13, 2014 07:00 AM
Fast feeder's marketing gets a barbecue snob into the store for something he was pretty sure he wasn't going to like.
Advertising Age Player 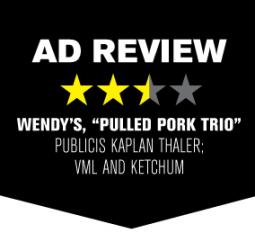 Wendy's pulled-pork sandwich isn't barbecue. It's garbage. The sandwich is smoke-free mystery pork drowned in horrible sauce and topped off with a coleslaw abundant in crunch but absent of flavor. (You can also have this slag-pile slapped onto a burger or onto an order of fries.)

In general, I'm a fan of Wendy's. But I knew going in that the sandwich was going to be the restaurant's equivalent of the McRib.

So why did I even try it?

As someone on Twitter pointed out, Wendy's pretty much launched a fake cause-marketing effort tackling the issue of "barbecue inaccessibility." The fast feeder acknowledges that "real" barbecue is an American treasure, but one that is hard to find outside of the "barbecue belt."

It also mocks those who would uphold barbecue's standards, making us look like part of that awful artisanal hipster crowd. Its first TV spot, from Publicis Kaplan Thaler, promised that "barbecue has a new home" and featured a barbecue snob being gently taken down a peg by the redheaded spokeswoman.

The company, with the help of VML and Ketchum, also unleashed a digital and PR effort, #BBQ4merica. It tapped former wrestler "Stone Cold" Steve Austin, Karate Kid Ralph Macchio and Alfonso Ribeiro, best known as Carlton from "The Fresh Prince of Bel-Air," to star in a series of silly videos and take part in a tweet-a-thon.

One of the videos starts thusly: "Miami Beach, Cape Cod, Malibu. … These are just a few of the geographically underprivileged places where millions of Americans don't have easy access to quality barbecue."

And while the first hour of the hashtag tweet-a-thon seemed to be completely hijacked by the profane and barely literate "Chauncy Murray," as the day progressed fans of Wendy's -- and fans of the celebrities -- started to play along as more videos rolled out.

The videos were ludicrous and loopy and prompted some engagement as well as some hate. But Wendy's headed it off at the pass: it invited participants to "sponsor a friend or a YouTube troll" and never took the bait to start a flame war with the "barbecue insider" crowd.

In fact, the effort made just enough fun of us that I finally caved in. I had to try it if I was going to mock it, right?

But this isn't a food review. It's an ad review. And Wendy's marketing got me into the store for something I was pretty sure I wasn't going to like.

That's got to be some kind of win. Right?

~ ~ ~
CORRECTION: An earlier version of this story used the incorrect Twitter hashtag for the barbecue effort.

Fast feeder's marketing gets a barbecue snob into the store for something he was pretty sure he wasn't going to like.