August 25, 2014 07:30 AM
Nature Valley sponsors Erik Weihenmayer who is about to kayak the Grand Canyon.
Advertising Age Player

Picture yourself kayaking through the Grand Canyon, repeatedly swallowed by the roaring and unpredictable rapids of the Colorado River. Now imagine doing this in complete darkness.

This is the fate that awaits Erik Weihenmayer, a blind outdoorsman who in two weeks will begin a 21-day journey kayaking a 277-mile stretch of the river, from near the Arizona-Utah border to Pearce Ferry near Lake Mead. The trip, called the "No Barriers Grand Canyon Expedition," will be sponsored by Nature Valley, which has struck an endorsement deal with Mr. Weihenmayer that includes a TV ad set to debut Monday night during NBC's broadcast of the Emmy Awards. 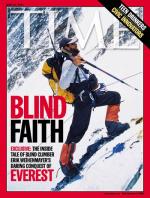 Mr. Weihenmayer, 45, who lost his sight at age 13, is intimately familiar with danger. An avid climber, he is the only blind man to ever to reach the summit of Mount Everest, a feat accomplished in 2001 that was celebrated in a Time magazine cover story. By 2002, he had scaled all of the so-called Seven Summits, which are the seven highest mountains on the seven continents.

But the Colorado River excursion, he said, will be his toughest challenge yet. "Climbing is slow and methodical and about power and endurance, and this is fast and furious and totally responding to dozens of stimuli in very short amounts of time," he said. "So it's hard on the nervous system."

He added: "For me, being blind, going into big rapids, you know in the next 20 seconds you might have a smooth line, or you might just be absolutely hammered, and you've got to be able to wrap your mind around that, and that uncertainty."

The TV ad, by contrast, is serene. The spot, created by ad agency Casanova Pendrill and directed by Pucho Mentasti, was filmed in the Rocky Mountains and features Mr. Weihenmayer and his daughter, Emma, strolling through sunlit fields and wading in gentle streams. The tagline, "feel the energy of nature," continues the General Mills-owned brand's long association with nature. But with the new campaign and partnership with Mr. Weihenmayer, Nature Valley is seeking to add a more emotional tone to its advertising, which has typically been product-focused, said Kerry DeLaney, the brand's marketing manager.

The ad does not mention the upcoming kayaking expedition, which might seem like a missed opportunity. But Mr. DeLaney said the omission was the result of the fact that the brand and agency developed the ad's storyline first, then later decided to sponsor the expedition. "We didn't want to force-fit it or try to create multiple stories within [one] story," he said.

Nature Valley will attempt to gain awareness of the expedition sponsorship by launching a Tumblr site that will house content from the kayaking trip, including real-time updates. The brand will promote the expedition in social media, and paid digital ads are also under consideration, Mr. DeLaney said. The brand team hopes that the TV ad will stir curiosity about Mr. Weihenmayer, driving viewers to search his name online, where they will learn about the expedition, he said. A Spanish version of the ad is already airing.

Mr. Weihenmayer, who started kayaking six years ago, will be accompanied on the trip by Lonnie Bedwell, a Navy veteran who is also blind. Mr. Bedwell, who lost his eyesight in a hunting accident, completed a 226-mile journey along the Colorado River last year, becoming the first blind man to kayak the river. He will tackle 51 additional miles during his trek with Mr. Weihenmayer.

The men will be joined by a team of guides. Mr. Weihenmayer will rely on a kayaker at his rear who will bark navigational instructions to him via a radio system, such as "hard left, small right, charge, hold your line."

Mr. Weihenmayer has a condition called retinoschisis, which rendered him legally blind when he was born. He maintained some rudimentary vision until he lost his sight completely by age 13. "When you go blind you are afraid that adventure is done, it's over, that you are just going to be pushed to the sidelines and you are going to be forgotten," he said.

He took up rock climbing at age 16. It was a savior. "I got up high and I could hear this sound of space way out in front of me, way up above the trees," he said, and realized that "adventure is just beginning in my life."

That philosophy is woven into the mission of a non-profit organization he co-founded called No Barriers USA whose mission is to provide experiences "that help people find their way to leading a more fulfilling life." The group serves students, military members and veterans, as well as disabled people, organizing activities such as international travel or mountain climbing.

Mr. Weihenmayer is also a sought-after motivational speaker, having given talks to employees of marketing giants such as AT&T, Apple and Procter & Gamble, according to his website, called touchthetop.com.

In speeches, which are often before salespeople, he tries to do more than simply relay his personal story, he said. "I think about these archetypal issues that we all face as human beings, whether in business, or adventure, or just life with your family," he said.

"There's constant reaching into the darkness, there's tons of innovation," Mr. Weihenmayer added, and "harnessing adversity, and not just surviving it."

The General Mills brand will sponsor the perilous 277-mile Colorado River trek, but the TV spot is notably more serene.