Scoop Returns Newsweek to Print With a Bang

March 07, 2014 12:00 PM
Newsweek seemed to crack the case of who founded Bitcoin at a fortuitous time this week -- just in time for a return to print.

Newsweek seemed to crack the case of who founded Bitcoin at a fortuitous time this week when it identified a 64-year-old physicist as the cryptocurrency's father in the magazine's first issue back in print. But hours after Newsweek published a profile of Dorian S. Nakamoto, the former defense industry and government employee was chased by reporters through Los Angeles and denied any role in Bitcoin, saying he first heard of it three weeks ago.

"I'm not involved in Bitcoin," Mr. Nakamoto told journalists yesterday outside his home in a Temple City neighborhood. The group then trailed him in a multi-vehicle car chase yesterday as he fled to an Associated Press bureau. The AP later wrote that he insisted during a two-hour interview that he first heard of Bitcoin when a reporter contacted his son last month.

Journalists, bloggers and others have sought for years to identify the mysterious computer coder who wrote a paper on Bitcoin's framework and created the software that serves as its backbone. The initial document carried the name of Satoshi Nakamoto, and because the author or authors otherwise chose to remain private and anonymous, it had been widely assumed the name was a pseudonym.

Publications such as the New Yorker have attempted to solve the mystery, examining possible Bitcoin founders that included a former cryptography student, a former programmer and economists. Solving the mystery would be a major coup for Newsweek just as the former Time rival returns to print.

But some Bitcoin enthusiasts said they were skeptical that Newsweek had found the right person. Others said they were furious that the news media would try to violate his privacy.

"If Satoshi Nakamoto wanted to be anonymous the whole time, why would he use his real name on the paper?" Mr. Draper said. "He always used non-tracking e-mails and did everything he could to stay anonymous, so it's difficult for me to understand why he would use his real name."

Other journalists said the stakes for Newsweek were high. "It remained unclear whether Newsweek had got the right man -- the enigmatic, anonymous architect of the troubled currency -- or committed a credibility-shredding blunder," the Guardian wrote.

The Mr. Nakamoto living in Temple City used to be named Satoshi and adopted the first name Dorian in 1973, Newsweek reported in its cover story. He was born in Japan, attended California State Polytechnic University, worked for defense contractors on classified military projects and eventually the Federal Aviation Administration, the magazine wrote.

Newsweek standing by its scoop
According to Newsweek reporter Leah McGrath Goodman, when Dorian Nakamoto was confronted at his home before publication and asked about Bitcoin, he responded, "I am no longer involved in that and cannot discuss it. It's been turned over to other people."

He told the AP that he was misunderstood.

"It sounded like I was involved before with Bitcoin and looked like I'm not involved now," it quoted him as saying. "That's not what I meant. I want to clarify that."

Messages left at IBT Media, which owns Newsweek, weren't answered outside business hours. Ms. McGrath Goodman told the AP that she stands by the exchange and that there was "no confusion whatsoever about the context of our conversation -- and his acknowledgment of his involvement in Bitcoin."

Emerging from his home after the article was published, Dorian Nakamoto told reporters he would go to lunch with one of them. He picked an AP reporter, and they got in a blue Toyota Prius and headed for Mako Sushi in nearby Arcadia. Other reporters drove after them, and as Nakamoto saw he wasn't going to be left alone at the restaurant, he bolted again. 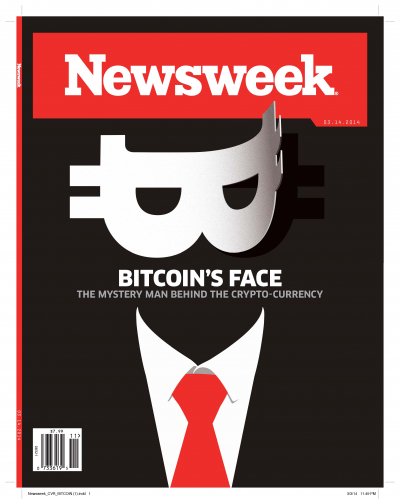 The cover of Newsweek's return to print

He and the reporter got back into the car and headed to the AP bureau in downtown Los Angeles. By mid-afternoon, a gaggle of non-AP reporters were standing outside the office waiting for him to come out.

The episode followed a day in which Bitcoin enthusiasts reacted to Newsweek's article with a mixture of resignation and disbelief, with some debating Dorian Nakamoto's possible role or whether he should have been left alone.

"Fascinating," Martti Malmi, a Finnish programmer who worked with Nakamoto on the Bitcoin code, wrote on Twitter. "Satoshi seems not much different than how I imagined him."

Gavin Andresen, the chief scientist of the Bitcoin Foundation who had been one of the few people to communicate with Satoshi Nakamoto, didn't immediately indicate whether he could identify Dorian Nakamoto as Bitcoin's creator. Mr. Andresen said in a message on Twitter that he regrets talking to the magazine about Nakamoto. He said he was disappointed that Newsweek decided to "dox," or document, the Nakamoto family.

Satoshi Nakamoto has been thought to be a pseudonym for a programmer or group of programmers who wrote the paper and the initial source code for Bitcoin. The code has since been handed off to a loose group of experts affiliated with the foundation, a Seattle-based advocacy group.

The paper, first published in 2008, offered a proof of the basic concept of Bitcoin, which uses a public ledger and a network of voluntary computers, known as "miners," to validate transactions that are signed with encrypted signatures. After the initial source code created the first batches of Bitcoin, it grew from an obsession of specialists into a global phenomenon.

Merchants around the world now accept Bitcoin for everything from kitchen appliances on Overstock.com to luxury goods listed on BitPremier, a website. It also trades for traditional currencies, and was priced at $651.14 at 4 p.m. Hong Kong time today, according to theCoinDesk Bitcoin Price Index.

Jeff Garzik, one of the core developers on the Bitcoin software protocol and an employee of BitPay, said "the 'real' Satoshi" can prove his identity only through cryptography.

"We will know Satoshi by his digital signatures," Mr. Garzik said in an e-mail, adding that the founder could either sign a message using his unique encryption key or make use of the Bitcoins that the creator is known to have kept.

Analysts who looked at the Bitcoin ledger have concluded that the creator of the system owns about 1 million coins, worth over $600 million at current prices, said Jered Kenna, a San Francisco Bitcoin investor. If the owner pledged never to sell or trade them, it would help add stability to what has been a volatile market, Kenna said.

Identifying Bitcoin's founder won't affect the current network, said Gregory Maxwell, one of the core developers on the project. The code is now out of Satoshi Nakamoto's hands, and can't be changed except by broad consensus among the users of the network. "There has been extensive rewriting and reorganization since the time when the creator of the system ended his involvement," Mr. Maxwell said in an e-mail.

But if the scoop stands up, it will have been a triumphant return for Newsweek's print edition.

UPDATE: Newsweek issued a statement on Friday standing by its reporting and arguing that the public has an interest in the identity of Bitcoin's founder.

"Ms. Goodman's research was conducted under the same high editorial and ethical standards that have guided Newsweek for more than 80 years," the statement said. "Newsweek stands strongly behind Ms. Goodman and her article. Ms. Goodman's reporting was motivated by a search for the truth surrounding a major business story, absent any other agenda. The facts as reported point toward Mr. Nakamoto's role in the founding of Bitcoin."

"It is natural and expected for a major news revelation such as this to spark debate and controversy," the statement continued. "Many of the greatest journalistic scoops have prompted similar reaction. Such debate is part of the democratic process and essential to the functioning of a free press. Newsweek is committed to furthering that spirit of open discourse. At the same time, Newsweek encourages fellow members of the press and the public at large to focus on analysis of the facts at hand rather than rush to assumptions or resort to emotion."

"Moreover, it encourages all to be respectful of the privacy and rights of the individuals involved."

Newsweek seemed to crack the case of who founded Bitcoin at a fortuitous time this week -- just in time for a return to print.